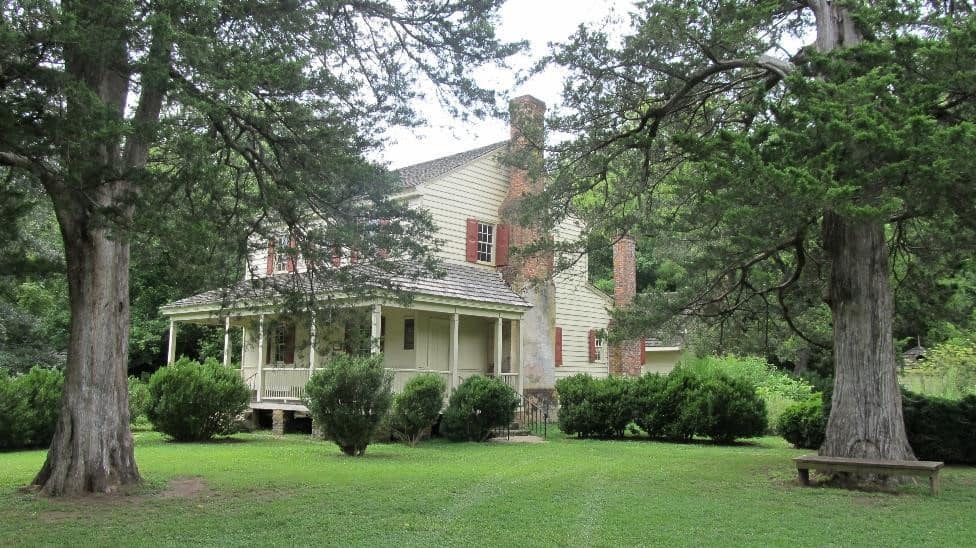 I love stories about women who made significant contributions to American history, so when I visited Walnut Grove Plantation in Roebuck, S.C.,I was happy to get to learn about Catherine “Kate” Barry, a heroine of the American Revolutionary War.

As you can see from the top photo, this house is unlike the antebellum homes that are so prevalent in the South. This is more like a farmhouse, but was considered a mansion in colonial times because of its large size. Not quite shown in the photo is a White Oak tree stump from a 430-year-old tree that just fell in June 2001. The tree began growing about 1570, nearly 100 years before the founding of South Carolina!

It’s amazing to walk through a house with so much history!   Loyalist William “Bloody Bill” Cunningham killed three Patriot soldiers sheltered at the plantation in 1781, one of whom was recovering upstairs (perhaps in the bedroom shown in the picture to the left)?

The Heroine Of Walnut Grove Plantation

Kate Moore was a daughter of Charles and Mary who resided at Walnut Grove, and was the eldest of ten children. She married Andrew Barry in 1767 at the age of 15, and was instrumental in helping to warn the militia of the coming British before the Battle of Cowpens in 1781.

According to legend, she tied her toddler to the bedpost while she rode out to warn neighbors that the British were coming. She knew the Indian trails and shortcuts where almost no patriots lived.

Her warning helped to prepare the colonial forces to defeat the British governor, Cornwallis and his men and drive them north, out of the state. I visited the Cowpens battlefield as well as King’s Mountain and Ninety-Six, so will write about them later.

Kate is buried in the family cemetery beside her husband, Andrew, who was one of the first elders of the Nazareth Presbyterian Church. The cemetery is located about a tenth of a mile from the Walnut Grove Plantation house, and contains the remains of about 150 people, including the three patriots who were killed by Bloody Bill. Some of the sites are marked only with a small rock sticking up out of the ground. Others – like hers – are marked with a tombstone, but are unreadable due to the age.

Visitors to Walnut Grove get to see a typical plantation kitchen, as well as Rocky Spring Academy, one of the first schools in the county. Outbuildings that are still located at Walnut Grove include the blacksmith forge, smoke house, wheat house, well house, dry cellar, barn, and reconstructed doctor’s office.

Kate Barry was an ancestor of the actress Amanda Blake (1929-1989), remembered for the role of the red-haired saloon proprietress “Miss Kitty Russell” on the television western Gunsmoke. Blake placed a cameo-sized portrait of Barry owned by her family in the local history museum, where it still remains on display.

A Visit To Historic Arlington