Walking through the gates of the Old Burying Ground in Beaufort, N.C., is like walking into another dimension. When I visited in September, locusts in the live oak trees were deafening and blocked out all other sound.

The cemetery is a peaceful place to visit just blocks away from the shops and restaurants in the quaint seaside town of Beaufort.

History Of The Old Burying Ground 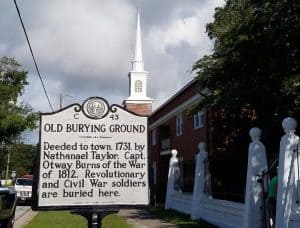 Notable burials include Otway Burns, a naval hero in the War of 1812, and Colonel William Thompson, commander of the Carteret County Regiment during the American Revolution. 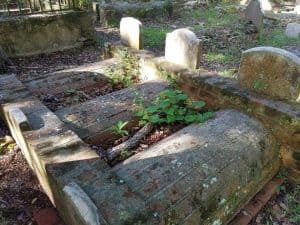 Some of the rounded gravesites at the Old Burying Ground cemetery in Beaufort, N.C.

Many graves are marked with shell, brick, or wooden slabs because stone markers had to be brought by sailing vessels.

Other grave sites have vaulted markers that were covered in brick to protect them from high water and wild animals. I’ve seen these at many historic seaport towns.

Paths between the ornate tombstones lead visitors through the oak canopied burial site. It is a beautiful, somber, and fascinating place to visit on a hot September day. I could have spent hours there, knowing that every tombstone has a story to tell.

Tales From The Old Burying Ground 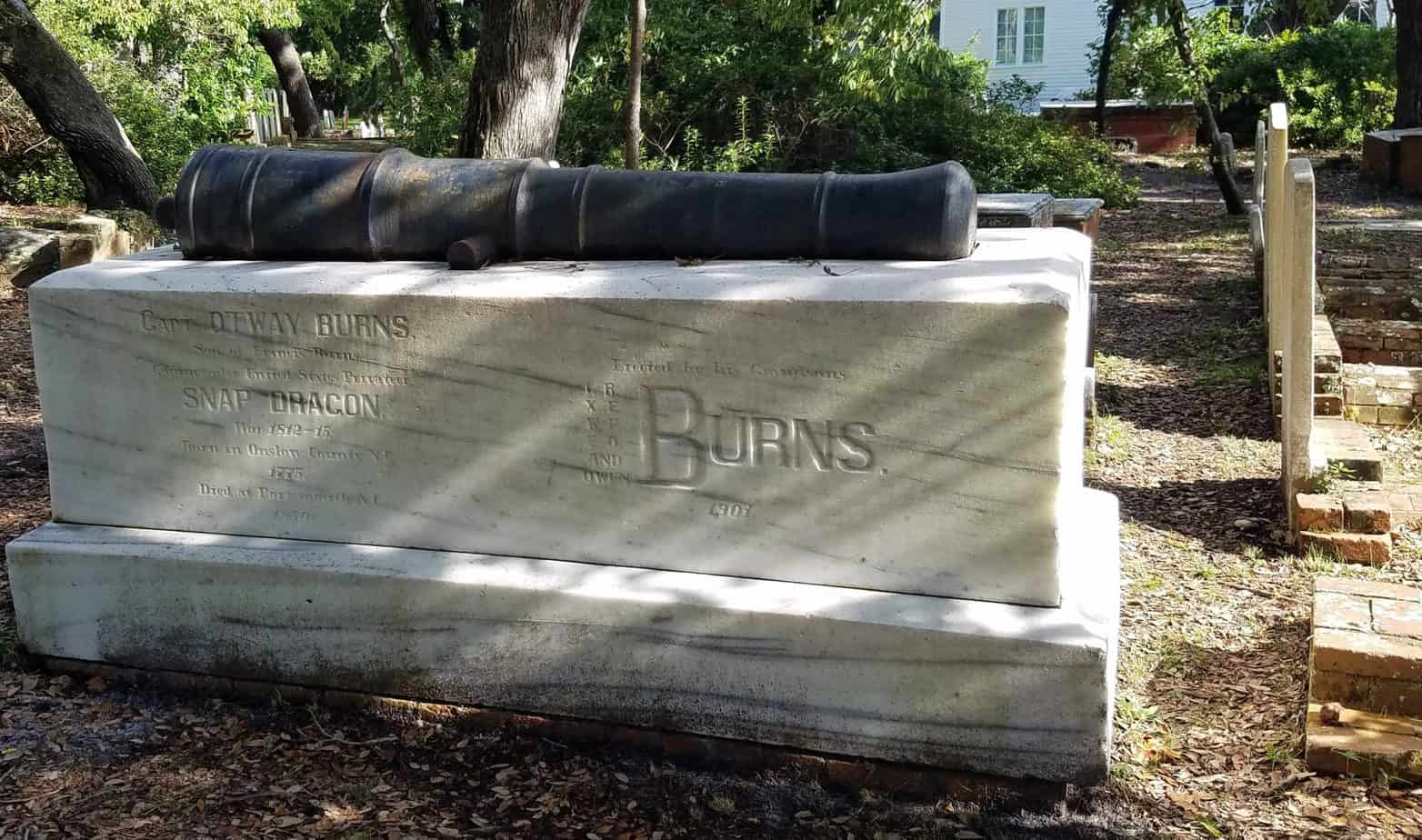 Gravesite of Captain Otway Burns, a hero of the War of 1812, with one of the cannons he captured from the British.

One of the first graves I saw was that of Captain Otway Burns, who was a hero of the War of 1812. Traveling throughout the Atlantic, Burns captured 300 British sailors and 42 vessels.

Captain Burns would later serve in the North Carolina State House and Senate. His grave includes one of the cannons from a British vessel he captured.

There was also the grave site of a British officer who was buried stranding straight up, and a common grave containing the crew of the “Crissie Wright,” a schooner that ran aground nearby during the winter of 1886. Six members of the crew froze to death or drowned. 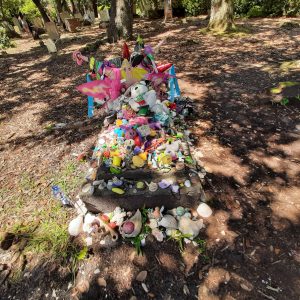 The most popular grave at the Old Burying Ground cemetery is the Little Girl in a Rum Keg.

The most unique grave site within the grounds is very easy to find even though it is only marked with a Number 24. Next to it stands a sign carved in wood that reads, “Little Girl Buried in Rum Keg.”

When I visited, the grave site was adorned with seashells and small toys. The tragic story behind this grave dates back to 18th century with a colonist family by the last name of Sloo (rhymes with snow).

The father was a prosperous merchant captain and included his daughter on a voyage to England. On the return trip to the colonies, the daughter became extremely ill and died.

The father, who had promised to his wife to return with their daughter, decided not to have her buried at sea. Instead, he purchased a keg of rum and buried her inside to preserve her body on the voyage home.

Upon return to Beaufort, instead of exposing his heartbroken wife to viewing the body, Sloo had his daughter buried within the barrel of rum as her casket.

A few other notable graves are:

Vienna Dill. A child who died of yellow fever and was buried in a glass top case.

Jechonias Willis. Killed when Ft. Macon was taken by Federal troops in 1862.

Col. William Tohmson.  The highest ranking officer from Beaufort who served in the Revolutionary War.

Two other gravesites also caught my attention — those of Sarah Gibbs and Jacob Shepard. Jacob was lost at sea and Sarah remarried. When he returned, they agreed that she stay with her second husband but be buried with her first to spend eternity.

The section in the northeast corner of the Old Burying Ground cemetery contains many unmarked grave sites and is considered by most historians to be the oldest part of the cemetery.

A record from September 1711 stated that the area had “been depopulated by the late Indian War and Massacre.”  It is probable that those in some of the unmarked graves perished during wars with Coree and Neusiok Native Americans.

The cemetery is currently used for historical tours and ghost tours. Many who visit the site say it is one of the creepiest and unsettling cemeteries they have ever visited and swear it is haunted. (I found it jaw-dropping and beautiful–maybe a little eerie–but stunning).

Beaufort is a beautiful small town full of history, pirate mystique, and charm. It is a hidden gem of North Carolina’s coast and one that I will write about in a future post.

Tours Of The Old Burying Ground

The Beaufort Historical Association provides guided tours that depart from the Welcome Center at 130 Turner Street. 24-hour notification is required.

The Old Burying Ground is located on Ann Street within easy walking distance from the Historic Site. Tickets are $12 for adults and $6 for children under 12. For more information about tours of the Old Burying Ground or other activities offered by the Beaufort Historical Association, stop by the Welcome Center or call 252-728-5225.

If You Enjoy Visiting Cemeteries, You May Also Enjoy: