A Visit To Valley Forge 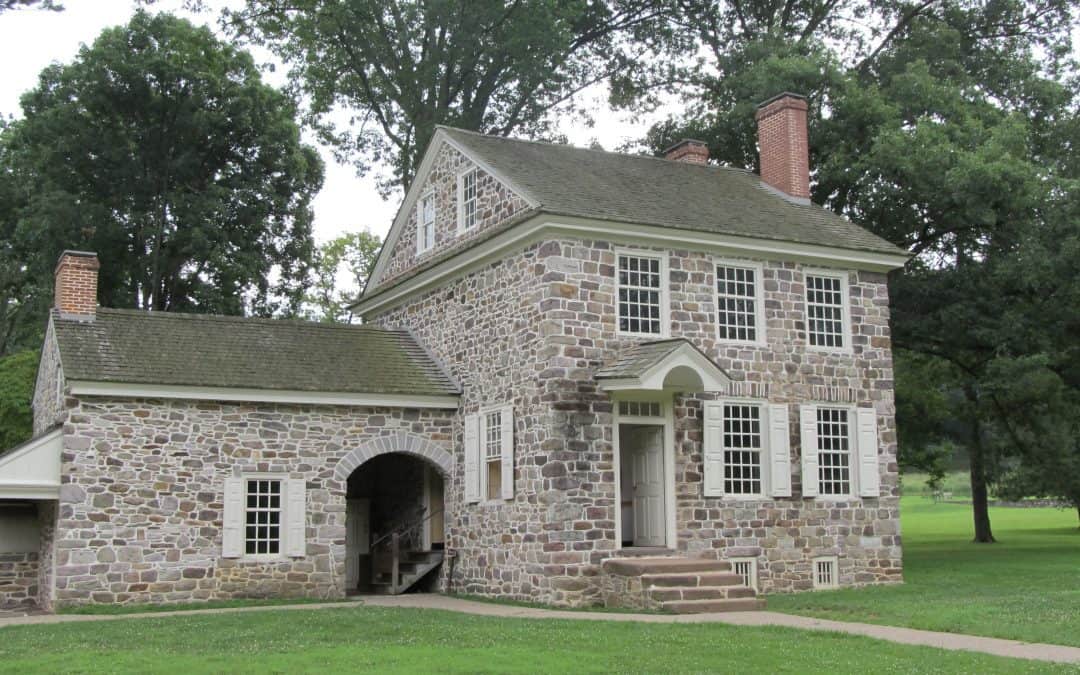 I don’t know why it took me so long to visit Valley Forge. It is one of the best preserved sites from the American Revolution and is only a few hours away. Much like the Gettysburg battlefield, the Valley Forge National Historic Park comprises 3,500 acres of picturesque, rolling hills.

When I visited during the summer months, the landscape was so green and peaceful, it was hard to imagine that General George Washington forged his Continental Army into a fighting force during the winter encampment there in December of  1777 to June 1778.

No battles were fought on the grounds, yet some 2,000 soldiers died there. To put that into perspective, that is more Americans than were killed at the battles of Brandywine and Germantown combined. The enemies the soldiers faced were hunger, disease, and an unusually brutal winter.

Today at the Park, Washington’s original stone headquarters is restored and furnished, and log soldier huts have been reconstructed. 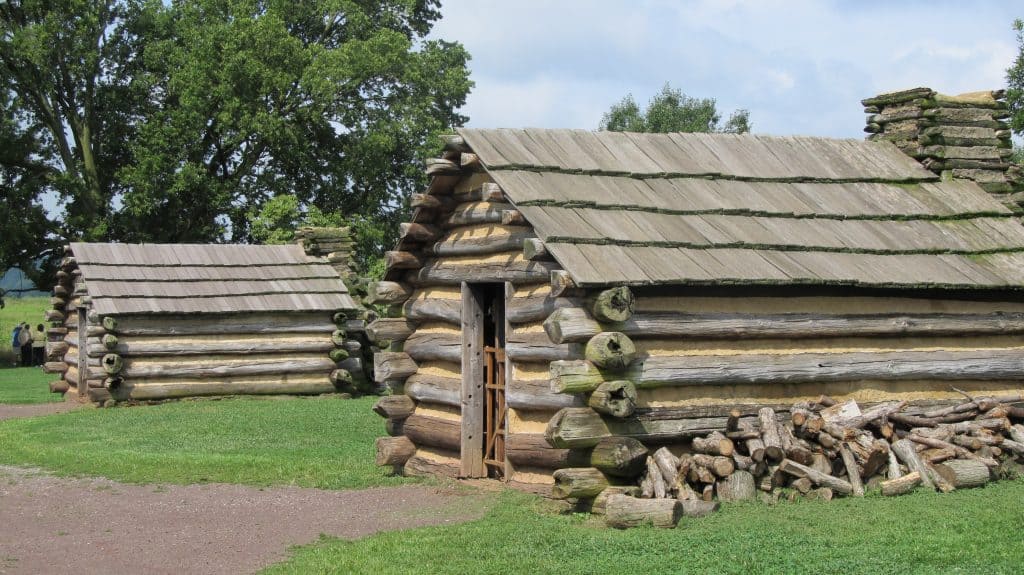 The stone house pictured at the top of this post is where Washington located his headquarters in the village of Valley Forge. The General and his military staff worked and lived in the house throughout the winter, making it the Pentagon of its time.

Mrs. Washington also joined him there for several months of the winter encampment. (Their marriage is quite a love story). According to reports, up to 25 people resided or worked there at one time.

The house looks bigger on the inside than it does on the outside, but would still be crowded with that many people! The small, attached building to the left is the kitchen, built somewhat away from the main building in case of fire.

The first floor has basically two rooms besides the kitchen. One was set up as an office, and the other was not open, but would probably be a parlor or dining room. 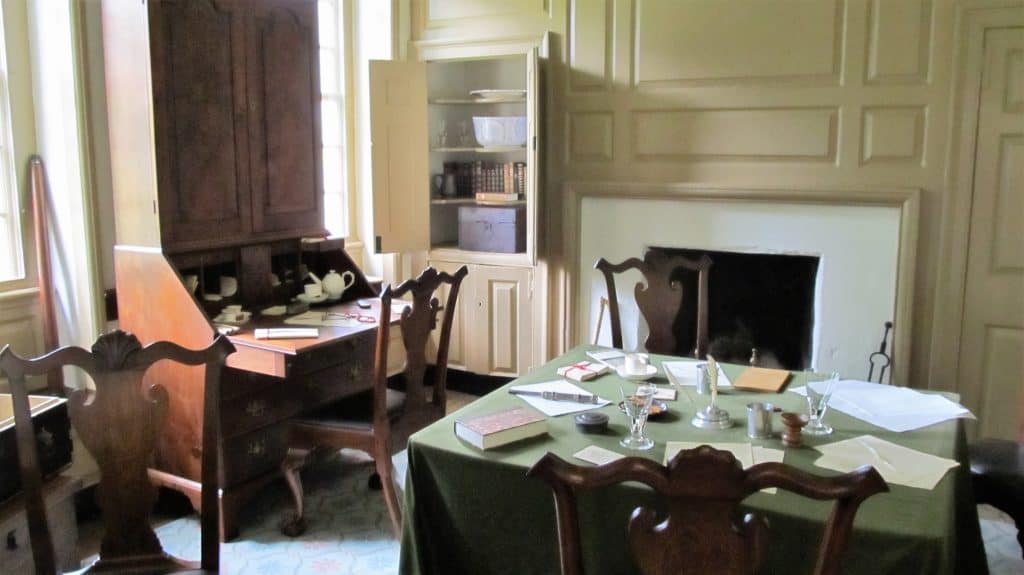 Upstairs there were three bedrooms, with another floor above that for additional sleeping space. The rooms were laid out as they assume they might have been. Unfortunately, there are no records from the original home to tell exactly what was located where.

Crowded as it was, I would imagine it was still more comfortable than the huts that the men slept in.

The house itself is believed to have been constructed in 1773 for Isaac Potts, operator of the family grist mill. (Some sources place the construction date as early as 1759). In 1777-78 the property was owned by Isaac but rented to his aunt, the widow Deborah Hewes, who sublet it to Washington.

Valley Forge was actually named for an iron forge on Valley Creek that was burned by the British in September of 1777.

The area was chosen because it was close enough to the British to keep their raiding and foraging parties out of the interior of Pennsylvania, yet far enough away to halt the threat of British surprise attacks.

When you visit Valley Forge, you’ll see that the densely forested plateaus, along with Mount Misery and the Schuylkill River, made the area easily defensible. It also provided abundant forests of timber that would later be used to construct the thousands of log huts in the camp.

It’s hard to picture the snow and freezing temperatures the soldiers endured during that winter. Only about one in three of the soldiers had shoes, and many of their feet left bloody footprints from marching.

As you can see from the picture, the huts provided some shelter, but certainly didn’t offer much in the way of comfort. 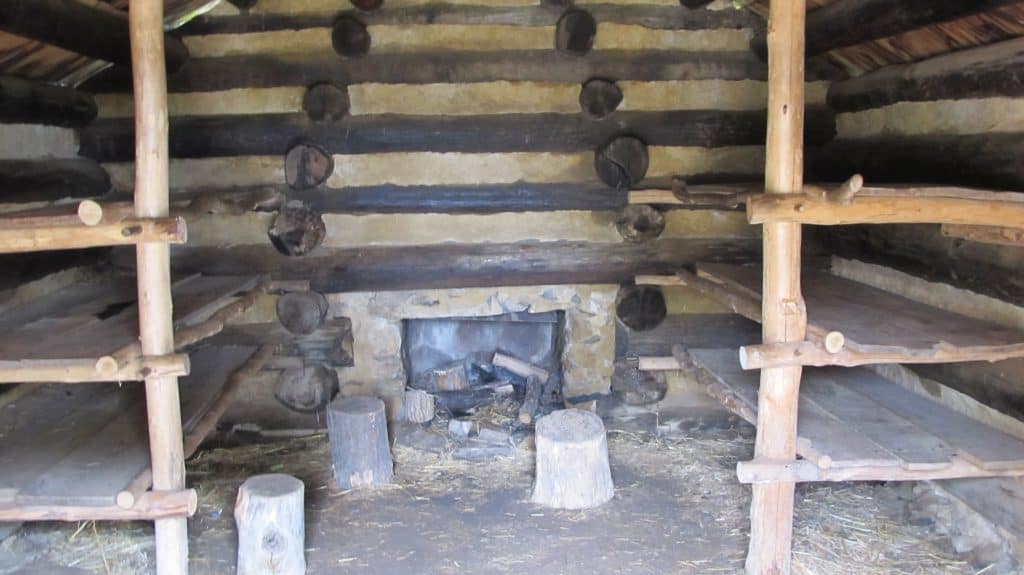 On December 19th, 1777, 12,000 soldiers and 400 women and children marched into Valley Forge. They began to build, what would become, the fourth largest city in the colonies at the time! This included 1,500 log huts, along with two miles of fortifications.

The encampment lasted about six months, from December until June. It was most definitely as diverse as any city, including everyone from free and enslaved African American soldiers to civilians and Indigenous people. There were also wealthy officers, impoverished enlisted men, wives of soldiers and European immigrants.

The Statues at Valley Forge

My absolute favorite statue at Valley Forge is that of General Anthony Wayne, sometimes known as Mad Anthony for his quick temper. He is seated on horseback, and is staring toward his home, not far away, in Paoli. 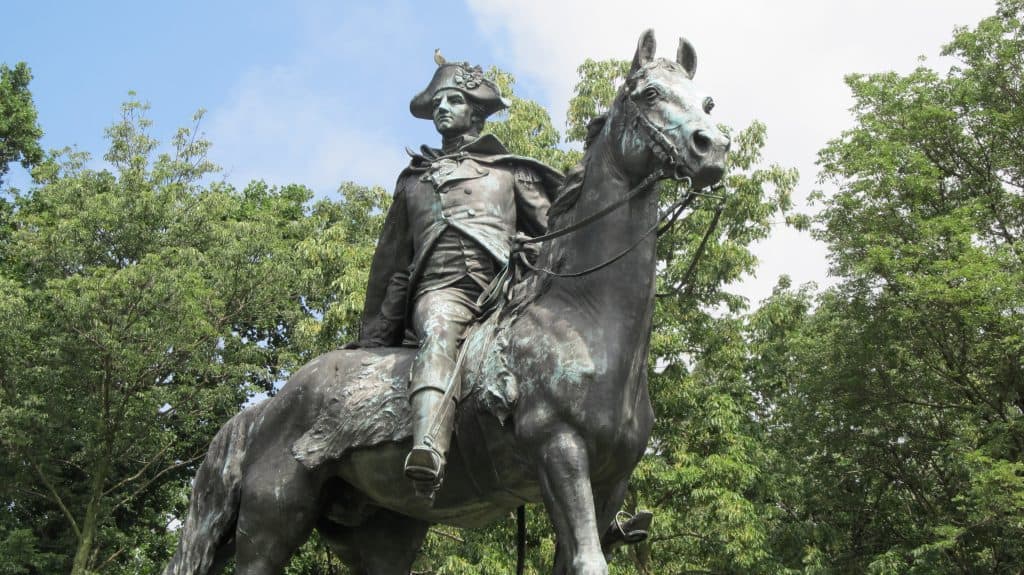 When you visit Valley Forge you’ll find a wonderful place to walk, ride bikes or just take a drive through the scenic landscape. You can soak up history and learn about those who built this nation through their unyielding courage and sacrifice.

When You Visit Valley Forge

Don’t forget to stop at the National Park Service museum. It’s a great place to pick up a map and snacks, as well as get an overview of the site. There is also a lot of history and artifacts pertaining to George Washington and the encampment at Valley Forge.

The History of Nottoway Plantation