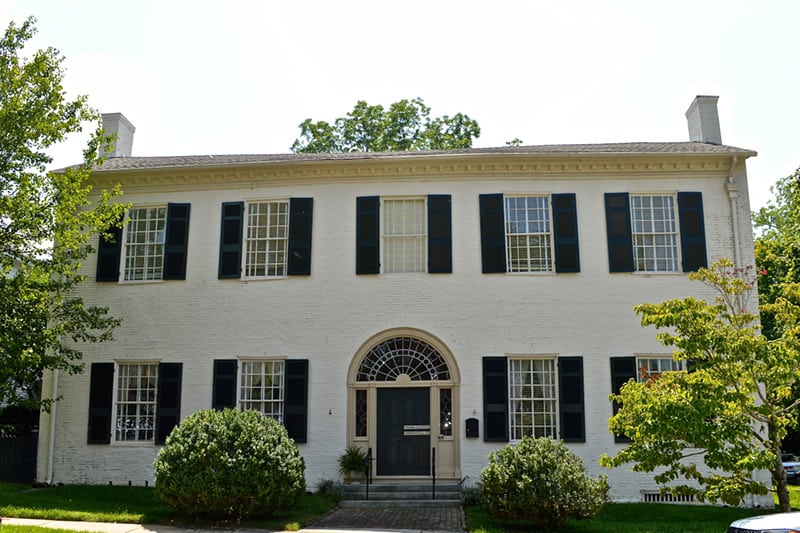 A true historical gem in Huntsville, Al., is the Weeden House Museum and Garden. Not only is the house itself intriguing, but so are the stories of the people who once called it home.

Built in 1819, the Weeden House is the oldest public house museum in Alabama. The architectural details and the furnishings within provide a great history lesson, as do the stories and paintings by its most notable resident, Howard Weeden.

If you enjoy old houses, history and fascinating stories from the past, then come along for a tour of the beautiful Weeden House Museum and Garden.

Past Lane Travels contains affiliate links and is a member of the Amazon LLC Associates Program. If you make a purchase using one of these links, we may receive compensation at no extra cost to you.

plan a trip to the weeden house museum and gardens

If you’re planning a visit to Huntsville, Al, make sure you add the Weeden House Museum and Gardens to your must-do list.

I was lucky enough to receive a tour of the house and loved the unique history the house tells through its former owners.

As you will see, the house itself is a historic treasure, but one of its occupants is an amazing and little-known figure in American history.

Read on to find out more about the Weeden House and Miss Howard Weeden.

Famous Occupants of the Weeden House in Huntsville

Built at 300 Gates Avenue in Huntsville the same year as Alabama became a state, the Weeden House was home to John McKinely from 1824-1827 before he became an Associate Justice of the U.S. Supreme Court.

Banker and planter Bartley M. Lowe, the first president of Huntsville Bank, also lived in the house before it was bought by William Weeden in 1845.

A doctor and successful planter, Weeden moved there with his second wife, Jane, and their five children. Unfortunately, tragedy soon struck the family.

Within two years of the Weedens moving into the house, Dr. Weeden died quite suddenly while on a trip to New Orleans.

His widow was left to care for five small children. Even more heartbreaking is that another child, Maria Howard, arrived six months after her father’s death.

Historical Treasures will Delight at The Weeden House

Originally the Weeden House property included a main house, kitchen and servants’ quarters building, a smokehouse, and a well house. The kitchen was separate from the house because of the danger of fire, which was a common feature in those days. This building was also used to quarter slaves.

The Weeden House is designed in the Federal style of American architecture with a five-bay, gabled, L-shaped structure. Made of solid masonry, the house has six rooms and its walls are eighteen inches thick.

There are two large parlors and a dining room downstairs and three bedrooms upstairs. I love that all of the rooms are open to the public on the guided tours of the house.

Step Inside The Weeden House

When you step inside the door of the Weeden House, you are instantly transported to another time.  The two-story brick house features an impressive leaded glass entrance fanlight above the entrance—unlike anything I’ve ever seen.

The eye-catching fanlight window, made of lead glass, is mounted in a metal brace and surrounded by hand-carved wood trim. The window glass used was hand-made and very thin, so you can still see the waves and imperfections.

The front door is made of wood with eight panels, and the glass panes have hidden pullout shutters on both sides of the door—another thing I’ve never seen before.

Just as spectacular as the fanlight window is the spiral staircase that rises up from the large center hall. The hand-carved wooden decorations on each step highlight the high level of craftsmanship throughout the house.

According to a publication by the Historic Huntsville Foundation, no other surviving Federal period Huntsville house has woodwork of the elaboration of the Weeden House.

There is also a back stairway which rises from the dining room to the third bedroom. This well-lit and sunny upstairs room was used by Howard Weeden for her painting sessions.

The entire house is furnished with authentic nineteenth-century furniture acquired through donations or purchased from antique dealers using donated funds.

Another interesting story behind the beautiful front staircase is the existence of a “mortgage button.” I had heard this story before at a plantation house in Louisiana, so it was interesting to hear it again in Alabama.

The mortgage button, also known as the “brag button” in the Southern States, was attached to the newel post and showed everyone that there were no liens on the property.

In case you aren’t familiar with the term, a newel is a central column around which winding stairs are attached. A newel post is the post at the end of a stair that anchors the railing.

When styles called for broader newel posts many, including lathe-turned round posts, were hollow. The story of the mortgage or brag button is that when a house was paid in full the mortgage paper was rolled up tightly to fit or burned and the ashes placed in the hole.

A decorative cap was then placed on the post to show everyone who entered the house that the mortgage was paid in full.

Weeden House During The Civil War

Although Huntsville was a very “Yankee-friendly” city during the Civil War, it was still a challenging time. When Union officers decided to use the Weeden house for their headquarters, Howard Weeden and two other female family members were given short notice to evacuate.

They moved into the slave quarters for a short time, but with so many people sharing a 300-square-foot space, they decided to leave Huntsville and stay with one of the older sisters in Tuskegee.

When the family returned to Huntsville in 1866, the house was in bad shape and so were their finances. Howard began earning money painting portraits, note cards, and just about anything people would pay her to paint. She also gave art classes.

The Art Of Howard Weeden

Mrs. Weeden arranged for art lessons from well-known painter William Frye when Howard first showed  artistic talent early in her life. Howard’s artwork is now displayed throughout the house and is truly amazing.

What makes the paintings created by Howard even more fascinating is the fact that she had very poor eyesight. She had to sit so close to the watercolor paper that her nose almost touched it, and she used a brush with only one to three horsehairs!

As you can see, the detail in her portraits make them look like photographs.

Most of the works of Howard Weeden were based upon portraits of freed slaves and their children. She did not like the way African Americans were depicted after the Civil War, so she began painting those she knew in a realistic way.

After the painting was done, Howard would often write poetry to go with the picture.

Howard was born and died in the Weeden house. Prior to her death in 1905, she published four books of poetry: “Bandanna Ballads,” “Songs of the Old South,” “Old Voices” and “Shadows on the Wall.”

The Weeden House Museum and Garden

The Weeden house remained in the family until 1956, when it was purchased at public auction by a Mrs. B. A. Stockton. After renting the house for some years, the house was sold.

Now owned by the City of Huntsville, the Weeden House Museum and Garden is leased by the Twickenham Historic Preservation District Association and maintained as a 19th century house museum.

I really enjoyed my visit to Huntsville, especially the historic sites. In addition to the Weeden House Museum and Garden, I toured an old hardware store in Huntsville that is still in operation today.

Enjoy Historical Fiction? Check This Out! ⬇⬇⬇

The Weeden House Museum and Gardens is open for tours as well as being available for special events and weddings.

All history tours are guided tours and last approximately 1 hour

All hours are subject to change based on event rentals

Call them with any questions you may have at 256-536-7718 or reach out to them via email at theweedenhouse@att.net

If You Like Old Houses, You May Also Enjoy:

A Visit To Historic Arlington