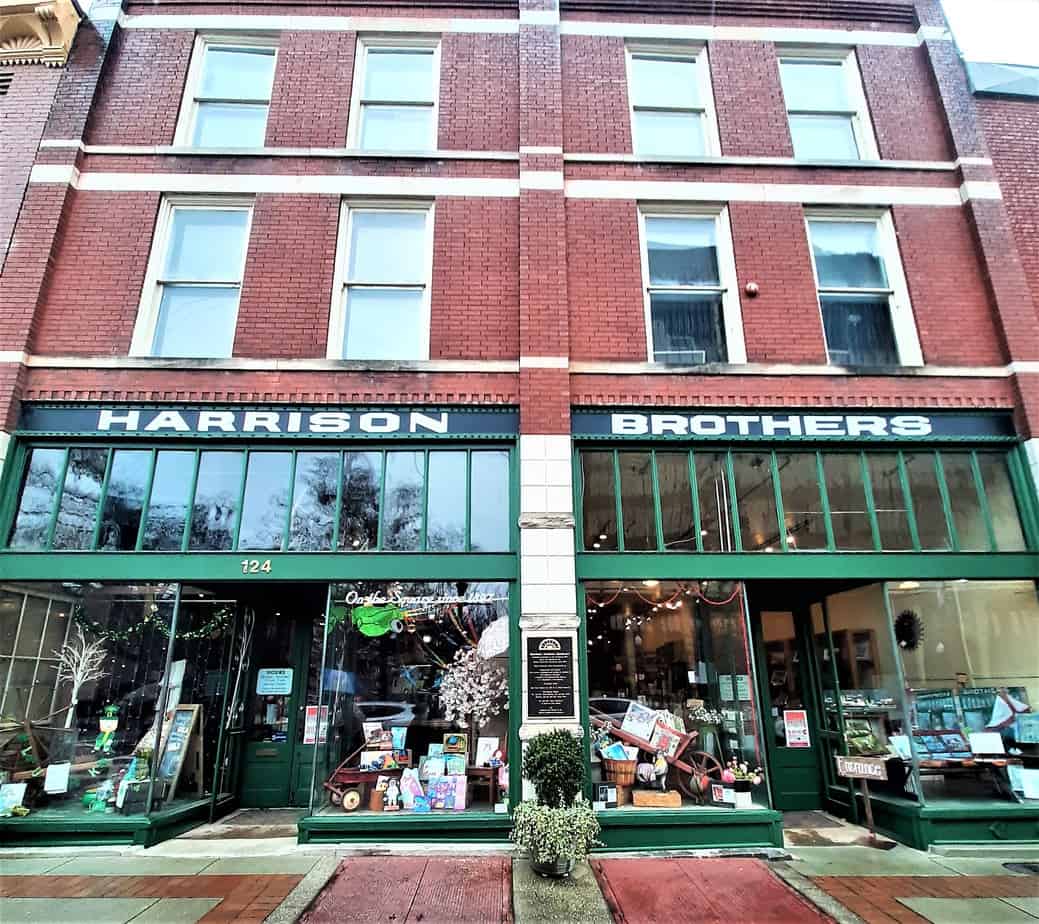 You know you’re walking into a historic building the minute you open the door at Harrison Brothers Hardware in Huntsville, AL.

In any event, this old-fashioned store located in Huntsville is both a nostalgic destination and a great shopping excursion.

Past Lane Travels contains affiliate links and is a member of the Amazon LLC Associates Program. If you make a purchase using one of these links, we may receive compensation at no extra cost to you.

There’s something about walking on creaky wooden floors that gives you the sense of stepping back in time and makes you want to savor every minute of the experience.

As Alabama’s oldest operating hardware store, Harrison Brothers is a real treat for history lovers—but you certainly don’t have to be a history buff to enjoy the ambiance of a bygone era.

Before the era of Wal-Mart, malls and convenience stores, stores like Harrison Brothers Hardware were as much about being social gathering places as they were about purchasing much-needed staples.

Not only could adults shop for food items, clothes and household necessities, but kids often looked forward to the chance of coming home with some penny candy.

These stores were also where the community gathered their news, shared local gossip and ran into friends and acquaintances.

It’s hard to imagine today when we run to the local store for a gallon of milk, but back when Harrison Brothers Hardware was in business, shopping was a major social event.

By necessity, country stores would be packed with products all year long from the floor to the ceiling—and Harrison Brothers Hardware is still that way today.

Even the original ladders are there to grab items from the high shelves that stretch to the ceiling. Long counters show off everything from canned goods, teas and spices to hard candy, jams and marbles.

Started as a family-owned business in 1879 by brothers James B. and Daniel T. Harrison, the store originally opened as a tobacco shop on Jefferson Street.

In 1897 the brothers purchased the current building on South Side Square and expanded into the adjoining building in 1902.

Both of the buildings were remodeled after a fire in 1901, but amazingly, alterations since the beginning of the last century have been minimal.

All of the original shelving is still in the old store, as is a freight elevator, an old desk and other equipment used by the Harrison brothers.

Over time, the brothers’ changed and expanded their inventory from just tobacco. They eventually added furniture, appliances, cookware, and then hardware.

Cast iron frying pans are still for sale in the store, as are marbles by the scoop. Marbles were one of the top-selling children’s items from the olden days and still are today.

After the death of James Harrison in 1908, another brother, Robert, was brought into the business. As Daniel and Robert grew older, Robert’s sons Daniel and John took over in the 1950s and kept the store running through 1983.

In 1901 a freight elevator that operated on a specially made pulley system was installed to help lift furniture from the basement to the main merchandise floor.

We can assume that among the furniture items would be heavy cast iron coal and wood stoves weighing several hundred pounds! A skylight that was built above the elevator to let light into the store also remains intact.

Another interesting item that is still in service and is often admired by guests is the 1907 National cash register. This piece of American history is still used to ring up customers today, although a more modern system is also in place.

The vintage machine, once used by James and Daniel, is decorated with an ornate embossed design on a heavy brass base. Of course, I had to have the volunteer operate it so I could hear the classic sound of the bell when the drawer opened.

Other original items in the store, in addition to the fixtures and shelving from 1902, are the brothers’ desk, a large safe and an old coal stove.

Imagine being able to step into a time capsule, and you will have an idea of this authentic travel destination.

Thanks to the local community, the store continues to be a fixture in the town more than a century after its original opening.

The death of John Harrison in 1983 appeared to signal the end of the line for Harrison Brothers Hardware. Thankfully, the non-profit Historic Huntsville Foundation (HHF) stepped in and purchased the beloved store in 1984.

The dedication of the local community to preservation is evidenced by the fundraising benefit for the store. The event was attended by more than 600 individuals to help fund its re-opening.

Volunteers from the HHF continue to operate the vintage building as a museum and general store. Although it no longer carries hardware, there is something for everybody, from frying pans to stationary and candles to cookware.

The upper shelves of the store are brimming with the decades-old hardware and fixtures the brothers stocked. Shelves below include items of local interest, reproduction vintage toys, jewelry, and a variety of trinkets.

The west wing of the building serves as an art gallery for artists and hosts monthly art shows. In addition to garden gadgets and bird feeders, you’ll find cotton throws, colorful tins, and marbles by the scoop.

The second floor of the building includes an area called “The Loft.” This space provides a meeting room for community groups, work space for small businesses, and an office for HHF.

Even the basement is still used today by HHF as an architectural salvage storeroom. Materials salvaged from structures across the region, like windows, doors and shutters, are available to repurpose in other homes.

A visit to this one-of-a-kind store certainly isn’t like going to mall—it’s better!

Hearing the gentle squeak of the wide plank floors as you walk down the aisles of display shelves is truly a shopping experience you will never forget.

It’s not just the products, the shelving and the fixtures that have been preserved by the HHF. They also make it a point to highlight and preserve the sense of community, tradition, heritage and customer service of the Harrison brothers.

The Foundation also makes sure to carry some of the same types of merchandise sold by James and Daniel. Some of these items include pottery, cast iron cookware and gardening tools. The organization wants to ensure that Harrison Brothers Hardware products embody “American made” at its finest.

Thanks to the efforts of HHF, the old-fashioned double doors are still open after more than 100 years. Harrison Brothers Hardware is a piece of history that continues on as a cherished heirloom to the community.

The store is a living 19th century landmark that offers visitors a glimpse back in time.

I love that the community of Huntsville, which is known for being home to a world-class technology center as well as the U.S. Space and Rocket Center, is also dedicated to preserving the past for future generations.

A trip to Huntsville is not complete without a visit to the iconic historical landmark of Harrison Brothers Hardware. It’s a tourist destination, shopping experience and museum all wrapped up in one.

If You Go To Harrison Brothers Hardware:

Harrison Brothers Hardware is located at 124 Southside Square in Huntsville. It was listed on the National Register of Historic Places in 1980.

In 2001, it was designated as a Save America’s Treasures project by the U.S. Department of the Interior.

If you enjoy visiting historic landmarks, you might like these articles on the Weeden House Museum and Nottoway Plantation.