The History Of Nottoway Plantation 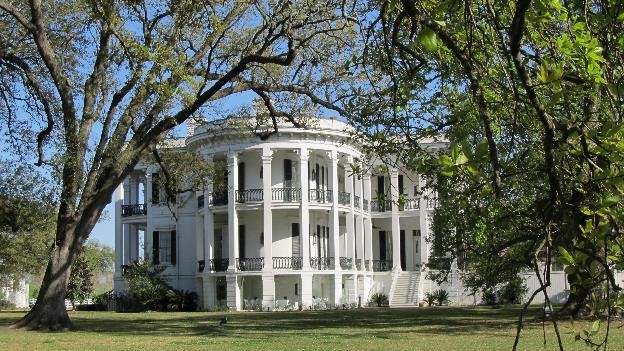 The history of Nottoway Plantation is one with deep Southern roots. Considered an American heritage landmark, the house sits about 200 feet behind a Mississippi River levee in the heart of Plantation Country.

Surrounded by mature live oaks, magnolias and pecan trees, it’s like taking a step back in time.

If you love Southern plantations, put this one on your bucket list.

Located near Baton Rouge, La., this stunning Greek-revival style home is the largest existing plantation house in the South.

The sweeping, curved double stairs are iconic, giving the house the aura of an “American castle.” In fact, Nottoway is referred to by locals as the “White Castle.”

During my stay in one of their cabins, I explored every inch of this property, including at 1:30 in the morning (there was a full moon). I didn’t want to sleep and miss a single thing! I even walked down to the levy early in the morning, and watched small tug boats push huge barges down the river. 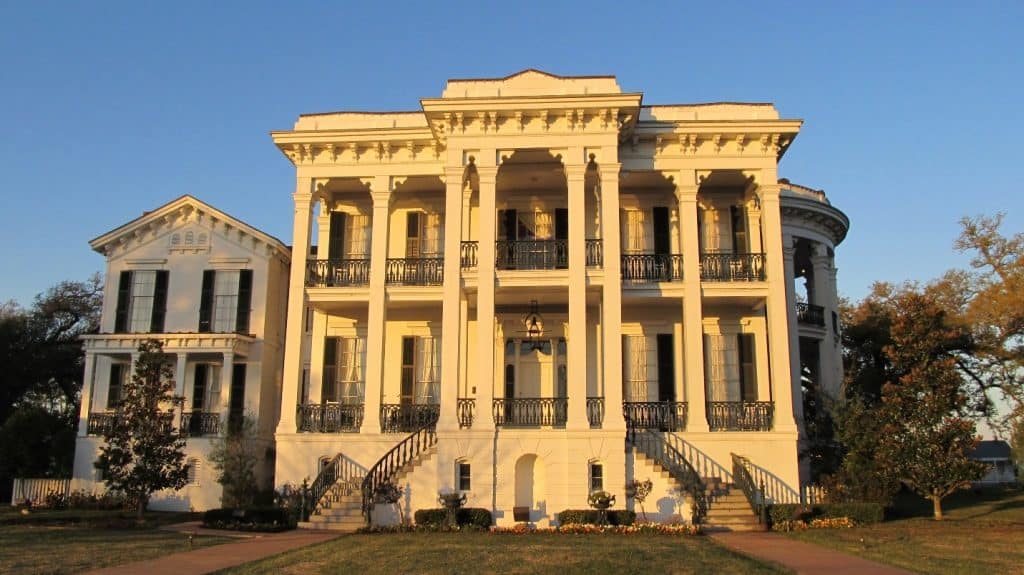 The east side of Nottoway Plantation at sunrise.

The History of Nottoway

Four years after his marriage to Emily Jane Liddell Randolph, John Randolph moved to a cotton plantation in Louisiana known as Forest Home. (About five miles from Nottoway). By that time, the couple already had two children. They would have eight more at Forest Home, and their last child was born at Nottoway.

If you’re keeping count, that’s 11 children, seven of which were daughters. 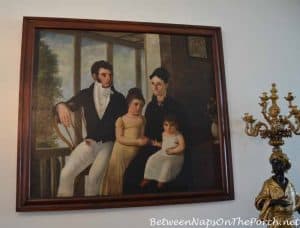 John Hampden Randolph is pictured with his wife and two of his 11 children at Nottoway Plantation.

John Hampden Randolph first purchased the land for his future castle in 1855 because he wanted a more “fitting home” to honor his position and stature. The beautiful property faces the Mississippi River, which was a major transportation waterway of the time.

Passing steamboats and showboats made river watching an exciting pastime in those days. Today, the high levy and changes in the river’s course leaves the view from the first floor of the house obscured.

The mansion boasts 64 rooms spread throughout its 53,000 square feet. Sound big? To put it in context, the house contains more than an acre of floor space spread out over three floors. It originally sat on 400 acres of highland and 620 acres of swamp.

When Randolph began to compile the materials for his castle, he used cypress, which was cut and cured under water for four years. Cypress has two unique qualities: durability and a natural resistance to termites. Considered a “junk wood” back then, it is almost impossible to buy now because it is so highly valued. 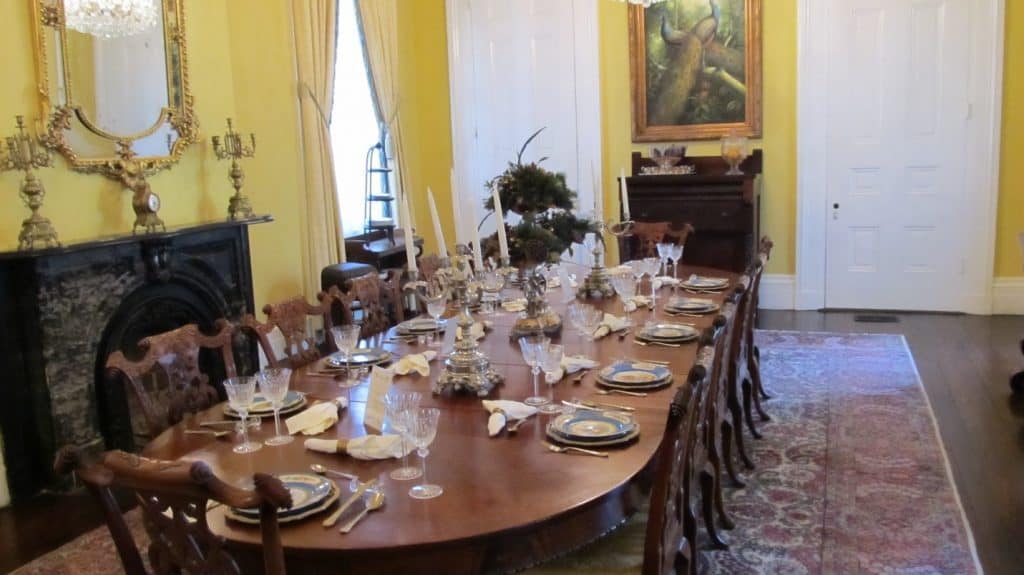 The formal dining room at Nottoway.

Randolph made it clear that no expense would be spared in the construction of his new home, which is evident when you see it even today He completed the venture in 1859 at an estimated cost of $80,000. (Equivalent to more than $40 million).

Innovations In The House

One of the most memorable things about the history of Nottoway Plantation is the innovative techniques employed by John Randolph. He was way ahead of his time in placing a bathroom  on each floor with flushing toilets, as well having both hot and cold running water.

The Dual Stairs At Nottoway

The double curved granite staircases that rise to the second story were created by skilled mason Newton Richards as a way to separate men and women.

Mr. Randolph, did not want his daughters going up the same steps as men because they might catch a glimpse of their ankles beneath their skirts as they climbed. This was considered a severe breach of social etiquette at the time. Can you imagine?

The left side was intended for ladies only and the right side for gentlemen. (The steps for the men can also be identified by the boot scraper at the bottom).

A Castle Fit For A King

Nottoway’s most unique room is a semi-circular white ballroom with Corinthian columns and hand-cast archways. Randolph had it painted completely white to show off the natural beauty of his seven daughters. Six of his daughters were married in the room. 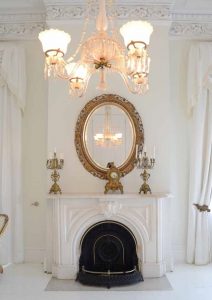 This antique mirror hangs on the wall in the white ballroom at Nottoway.

Two fireplaces with hand-carved rococo white marble mantles grace each side of the ballroom. An original mirror still hangs on the wall, once used by women to make sure their hoops weren’t showing beneath their skirts.

Over one of the fireplaces, there is a painting of Mary Henshaw (no relation to the family), whose eyes are said to follow the viewer around the room.

When it was completed, Nottoway included a massive entrance hall, a formal dining room, a gentlemen’s study and music room. It also had what they called the “wicker room,” bowling alley, library and Hall of their Ancestors.

Others rooms included a front parlor, sitting rooms, breakfast room, wine room, dairy, laundry, servant rooms and boys’ wing. The kitchen was located in a separate building adjacent to the house so that a fire would not destroy the main home. 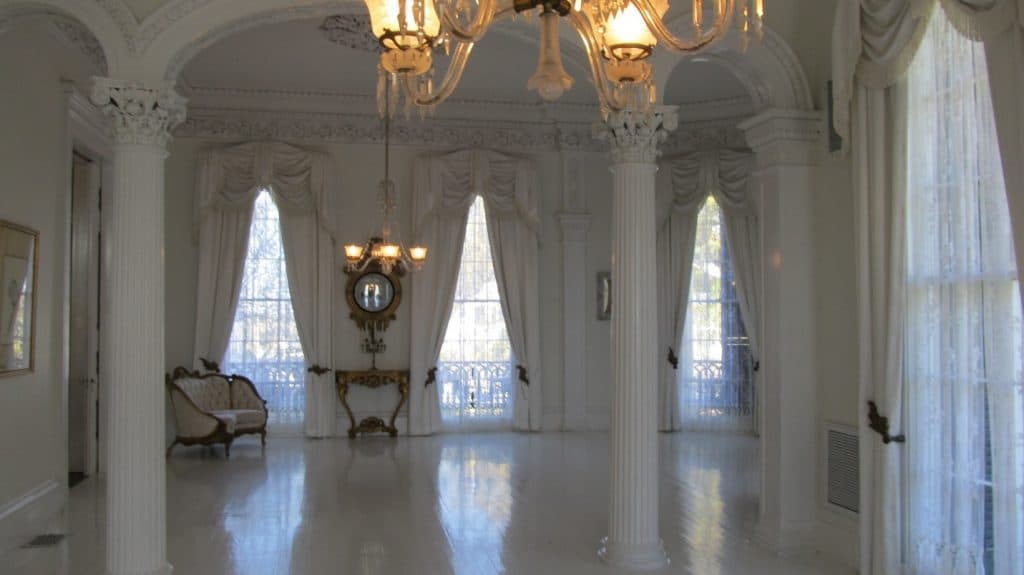 The White Ballroom at Nottoway. It is stunning!

Impressive On The Outside

Randolph hired New Orleans resident John Nelson to draft a landscape plan for the property. With the house as the centerpiece, Nelson incorporated 120 fruit and citrus trees, as well as  magnolia, poplar and live oak trees. He also included 75 rose bushes, 150 strawberry plants and a variety of flower and vegetable gardens. Unfortunately, most of Nottoway’s beautiful gardens are gone today. The Mississippi River changed and took away about six and a half acres from the front of the property.

Besides the massive home, Nottoway Plantation included a variety of other buildings including slave quarters, a schoolhouse, greenhouse, stable and steam-powered sugar house.

After the family moved into Nottoway, Randolph continued to own Forest Home Plantation, with its additional 1,500 acres of farmland. 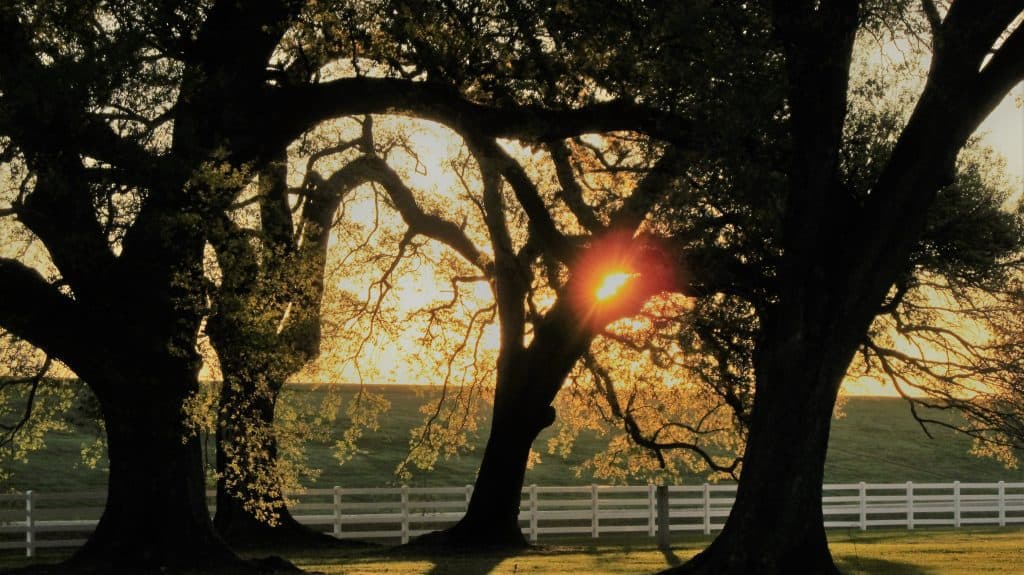 Just a few of the beautiful trees at Nottoway.

The Nottoway property also features 16 majestic oak trees, the oldest being estimated at 163 years—the same age as the house. In 2015, 11 of the tree were registered with the Live Oak Society of the Louisiana Garden Club Federation. They were each named after the Randolph children and can be identified on the grounds by plaques at the base of each of the trees. 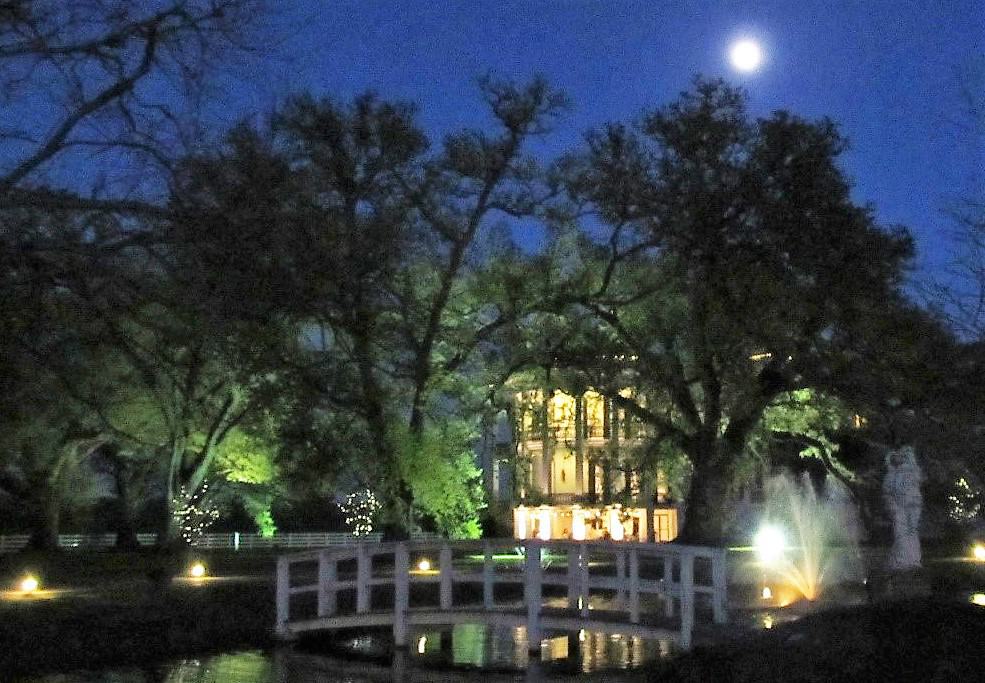 Nottoway at night with a full moon shining overhead.

On the outside, three-story-high columns support the palatial home. The spacious balconies on the second and third floors provide scenic and entertaining views of the Mississippi River.

The principal rooms of the house are located on the second floor. The entrance hall runs the length of the house and is 12 feet wide and 40 feet long

History of Nottoway During The Civil War

The Civil War began soon after Nottoway was completed. Although John Randolph did not support secession from the Union, he did back the war financially once it began.

He also sent three of his sons to fight for the Confederacy, losing his oldest son, Algernon Sidney Randolph, at the Battle of Vicksburg.

When the war began moving closer to Nottoway, Randolph took 200 enslaved people to Texas to grow cotton. His wife stayed at Nottoway with the youngest children in the hopes that would keep it safe. The plantation was occupied by both Union and Confederate troops, causing Emily Randolph to hide jewelry in one of the bedposts.

Fortunately Nottoway survived the war with only a single grapeshot to the far left column. Fired by a Union gunboat, the grapeshot did not fall out until 1971.

With the emancipation of the slaves, John Randolph contracted with 53 of them to continue working as laborers. When he returned to Nottoway after the Civil War, most returned with him. The sugar business was not as profitable after the war and by 1875, Nottoway was reduced to 800 acres.

Summing Up The History Of Nottoway

John Randolph died at Nottoway on September 8, 1883, leaving the plantation to his wife. Emily sold the plantation in 1889 for $50,000 which she divided equally among her nine surviving children. She died in Baton Rouge in 1904.

Nottoway was turned into a AAA Four-Diamond property that is also a popular special event and wedding venue. It is temporarily closed.

A Visit to Historic Arlington House

Most Haunted Places In Gettysburg