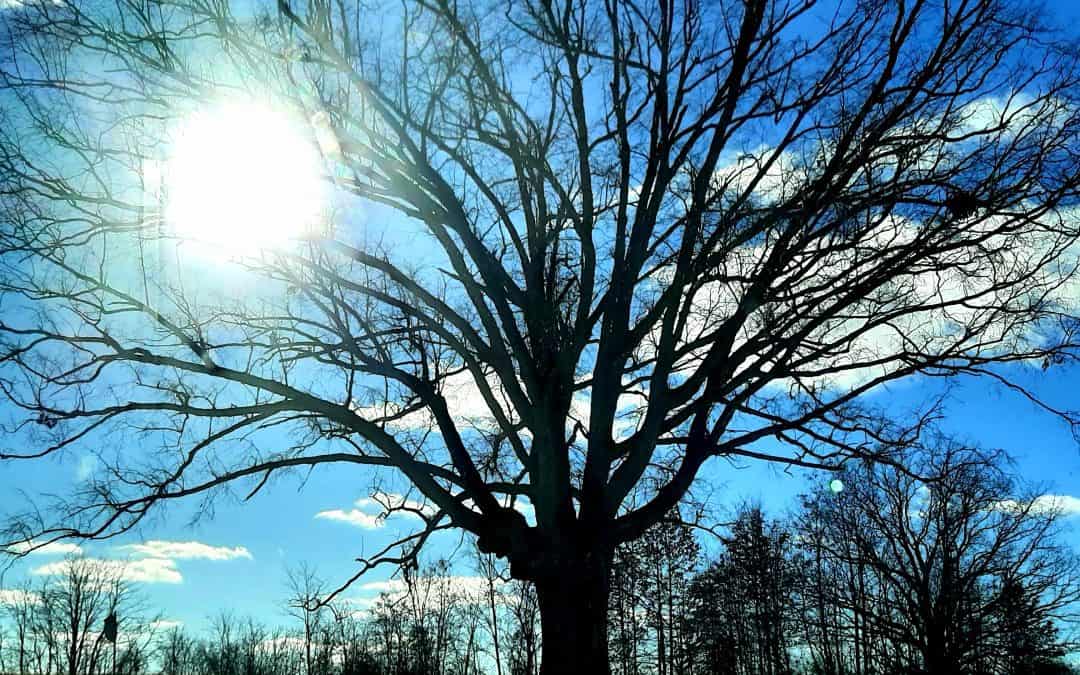 This ancient White Oak tree located just east of the town of Gettysburg looks beautiful with its vast spreading limbs, but it stands as silent witness to  devastating scenes that occurred after the three-day Battle of Gettysburg in July of 1863.

What Is A Witness Tree?

A Gettysburg Witness Tree is one that was alive during the Battle of Gettysburg, and therefore “witnessed” the history that unfolded in the fields and farmland surrounding the small town. Across 6,000 acres that comprise the Gettysburg National Military Park, rangers have documented at least a dozen trees.

Although the giant oak pictured above wasn’t near the scene of direct fighting, it probably offered shade to wounded soldiers at Camp Letterman, a large Civil War hospital that treated the worst of the wounded from both sides. An estimated 365 of the 4,000 soldiers taken to Camp Letterman died.

Since it is not located directly on the battlefield, this oak is not usually found on the Gettysburg Witness Tree list. Rather, this silent sentinel is located behind a strip mall along Rt 30. A Giant grocery store stands where the surgeon’s performed their operations and much of the immense Civil War camp is now paved with parking lots and a strip mall.

The  Camp Letterman hospital is said to have encompassed about 80 acres and included a cook house, dining tents, operating tents, tent quarters for support staff and surgeons, the dead house, embalming tent and hospital graveyard. 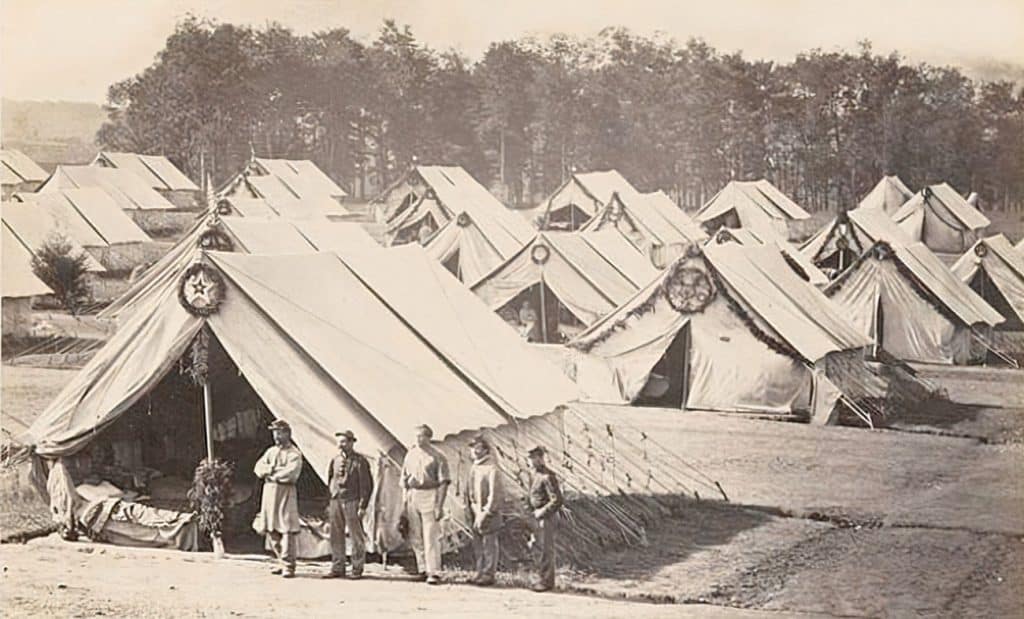 As the first general hospital placed on the battlefield rather than in one of the major cities, Camp Letterman soon became a model of a clean, efficient and well-managed medical care facility. It was named after Major Jonathan Letterman, who is known today as the “Father of Battlefield Medicine.” 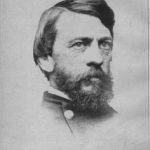 A surgeon by trade, Letterman is credited as being the originator of the modern methods for medical organization in armies or battlefield medical management. While he may not have been a general, Letterman changed the course of the Civil War and of American medicine. His innovation and retooling of the Union Army’s Medical Corps are highlighted at the National Museum of Civil War Medicine and his headquarters are represented on the battlefield at the Pry House Field Hospital Museum. 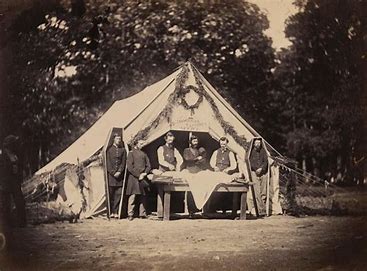 One of the biggest contributions Letterman made was organizing the ambulance service to remove men from the battlefield. In the first battle of the Civil War (Bull Run), wounded men laid in the hot sun for days before being treated.

Letterman not only created the first dedicated ambulance service, but used a triage system to separate the most seriously wounded. The proof of the success of his system came after the Battle of Antietam, the single bloodiest single day of the Civil War, when 17,000 wounded soldiers lay scattered across miles. Using Letterman’s method, all wounded were removed the battlefield within 24 hours.

“I often wondered whether, had I been confronted with the primitive system which Letterman fell heir to at the beginning of the Civil War, I could have developed as good an organization as he did. I doubt it. There was not a day during World War II that I did not thank God for Jonathan Letterman.” — Major General Paul Hawley, Chief Surgeon of the European Theater in WWII

The soldiers treated at Camp Letterman were said to be some of the worst cases because they were too dire to be moved to a hospital farther away. One nurse called them the “dregs of the battle.” Many of them were so seriously injured they had to be carried by stretcher rather than moved by horse-drawn ambulance. 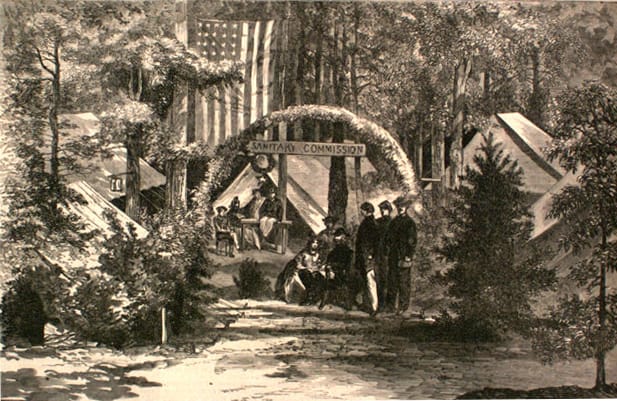 “It is now about 9 o’clock and every tent has a light and a lot of groaning sick men…there are many sights to see here but the most melancholy one is to see the ambulances come in after dark with the wounded.”

Under The Limbs Of The Gettysburg Witness Tree

There are many accounts of the suffering that took place on these grounds. For instance, one soldier was wounded on July 1 and spent three weeks at a field hospital and two weeks at Camp Letterman before he died. They list him as having a penetrating wound of the left lung and a gunshot wound to the abdomen that perforated his liver and gallbladder.

One member of a militia from Pennsylvania said the screams were so horrible that he could hear them from half a mile.

When the last man was finally removed and the hospital closed (November 20, 1863), one of the nurses noted:

“…[as] the hospital tents were removed—each bare and dust-trampled space marked where corpses had lain after death-agony was passed, and where the wounded had groaned in pain. Tears filled my eyes when I looked on that great field, so checkered with the ditches that had drained it dry. So many of them I had seen depart to the silent land… — Sophronia Buckland

This ancient living thing provides a vibrant touchstone to the past and makes me pause and think about the history that it witnessed. The souls of the past linger here, despite the concrete and pavement.

Gettysburg witness trees provide a living link to the past and stand as silent sentinels to the history that occurred around them.

You can see this tree without getting out of your car by pulling into Camp Letterman Drive (look right when pulling into the Sheetz store, east of Gettysburg). A Subway and Sherwin Williams Paint store are currently located in front of the tree.

15 Free Things To Do In Gettysburg