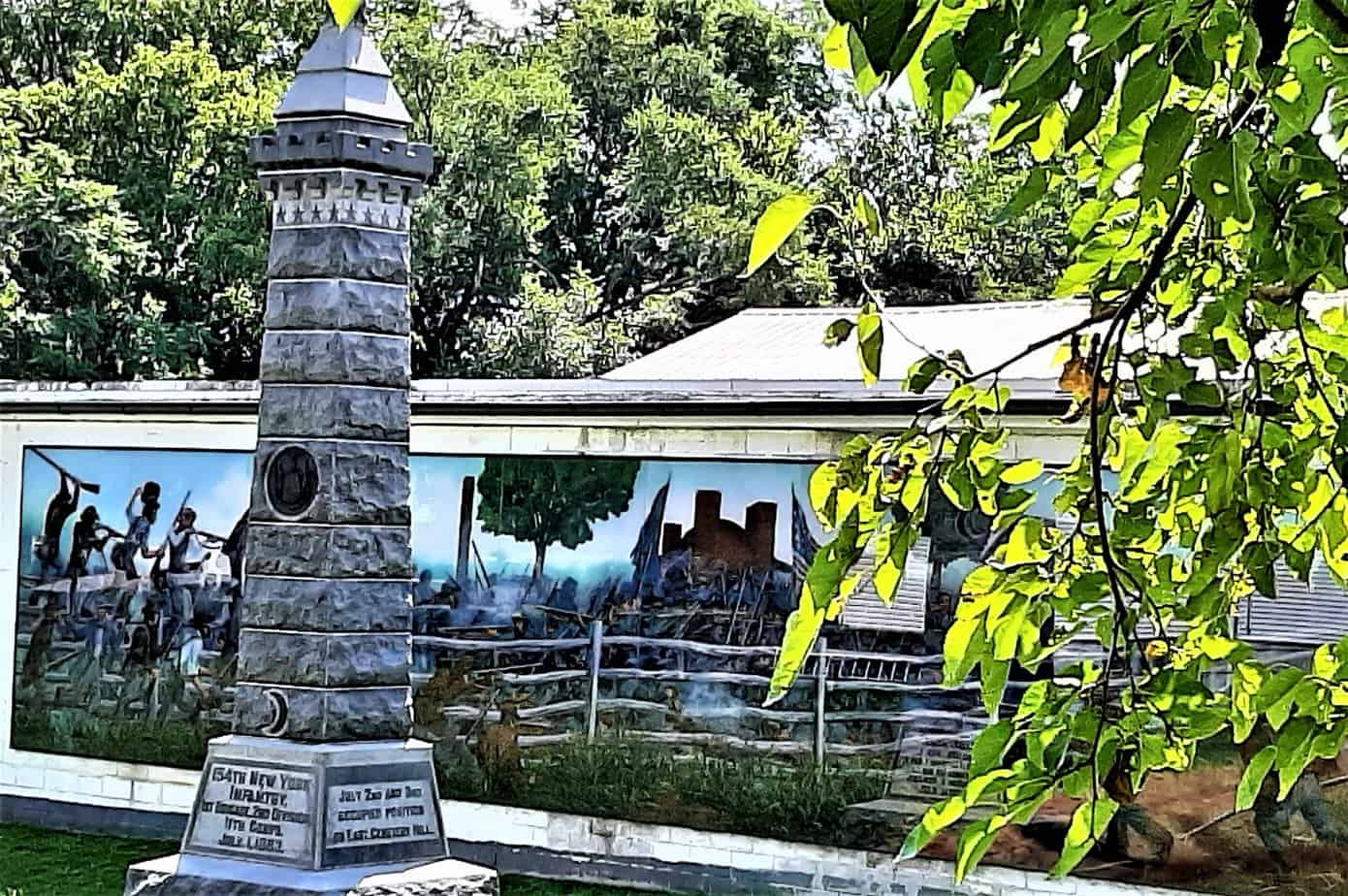 These Gettysburg historical sites are easy to spot if you’re looking for them—but even Civil War buffs and frequent visitors often pass right by without knowing they are there.

For instance, did you know there is a small cannon from the War of 1812 embedded in the sidewalk along Baltimore Street?

Or that there are artillery shells still embedded in the sides of buildings downtown?

Come along as I show you where these hidden things in Gettysburg are actually historic treasures waiting to be seen.

These hidden gems can be added to the many reasons that Gettysburg is worth visiting.

Past Lane Travels Contains Affiliate Links And Is A Member Of The Amazon LLC Associates Program. If You Make A Purchase Using One Of These Links, We May Receive Compensation At No Extra Cost To You. Read Our Disclaimer For More Information.

Penelope: A Gettysburg Historical Site From The War Of 1812

This Gettysburg historical site couldn’t be more obvious—yet hardly anyone knows about it.

Embedded in the sidewalk on the east side of Baltimore Street between Middle and High streets, Penelope is a small artillery piece that is a relic from the War of 1812.

Penelope was used during the war to announce American victories, and remained in use after the war for Fourth of July celebrations.

That practice continued until 1855 when too much gunpowder was used during a local Democratic election causing the cannon to partially explode.

The editor of the Gettysburg newspaper at the time—Henry Stahle—wanted to keep the cannon so he kept her chained in front of his office on Baltimore Street.

That’s where Penelope was when the Battle of Gettysburg raged through the streets in July of 1863, and that’s where she was when President Abraham Lincoln passed by on his way to deliver his Gettysburg Address.

And that’s where Penelope remains today.

From a time when the road was dirt to a paved main street and sidewalks, Penelope remains as a tangible–though often unnoticed–link to the past.

Witness Trees Are Another Link To The Past

There are a number of “Witness Trees” located on the Gettysburg battlefield and in the Gettysburg National Cemetery, but did you know there is also one on a busy street in the town of Gettysburg?

What Is A Gettysburg Witness Tree?

A witness tree is a tree that stood during the Civil War and was a “witness” to the Battle of Gettysburg.

Visitors to the well-known Mr. G’s Ice Cream on Baltimore Street may have sat beneath the shade of a large Sycamore tree that is a witness tree.

In addition to being a witness to the fierce fighting in the street during the Battle of Gettysburg, this tree also witnessed President Lincoln walking by on his way to deliver the Gettysburg Address.

Another witness tree was removed from the Mr. G’s property because of severe disease, as were two witness trees that stood in front of the Gettysburg Lutheran Church on Chambersburg Street. Those two trees were replaced by trees grafted from the originals.

Another Gettysburg Witness Tree that people seldom see is located along Route 30, east of Gettysburg behind the strip mall.

It is a beautiful and massive oak that is located at the site of Camp Letterman, the Civil War hospital that treated the wounded from the Battle of Gettysburg.

I always take visitors to the Coster Avenue Mural site when giving a tour, because it’s a Gettysburg historic site that is rarely visited.

This mural and several monuments mark the spot where heavy fighting took place during the first day of the Battle of Gettysburg between Coster’s Brigade and the Louisiana Tigers.

Used as a brickyard at the time, heavy casualties occurred because it was the only place that provided shelter.

The best way to find this historical site in Gettysburg is head north on Carlisle Street from Lincoln Square, and turn right onto Stevens Street (one block from first traffic signal).

Go straight through the stop sign and you will come to the monuments and mural.

Parking is limited but I’ve never seen anyone at this significant Gettysburg historical site.

Sad Story From The Battlefield

Further up Stratton Street beside the Gettysburg Fire Department station, stands a monument to one of Coster’s soldiers who fell near this spot.

This stone is the only monument to an individual enlisted man  on the battlefield of Gettysburg.

Strangely, the news of this soldier’s death was the beginning of a far-reaching story that traveled throughout the United States.

Later identified as Sergeant Amos Humiston, the soldier was shot just above the heart. He apparently laid down, took out an ambrotype photograph of three children, and then died.

When the body was found with the ambrotype clutched in his hand, it started a nation-wide search for his identity.

Read about the Drop-Dead Best Ghost Tours In Gettysburg.

After the picture was printed in newspapers, the children were identified as Frank, Alice and Fred Humiston.

A small group from the town of Gettysburg visited the Humiston home in New York in January of 1864.

When one of the representatives handed the bloodstained ambrotype to Amos’s wife, Philinda, it is said that ‘her hands shook like an aspen leaf, but by a strong effort she retained her composure.’

These Gettysburg historical sites are a bit more hidden, but they are still worth making the effort to see them.

Because Gettysburg is such a famous town, it has been visited by more than two dozen Presidents.

When Abraham Lincoln went to Gettysburg in November of 1863 to dedicate the Gettysburg National Cemetery, he attended a church service at the Gettysburg Presbyterian Church at the corner of Baltimore and High streets.

Today, his pew is corded off and preserved at the Church.

Two other Presidents—Dwight D. Eisenhower and Richard Nixon—attended the Presbyterian Church as well, and their pews are also marked.

Eisenhower had strong ties to Gettysburg since he lived in a farm outside of Gettysburg after his presidency.

Nixon attended Easter service with the widowed Mamie when he was serving as the 37th President of the United States.

The Presidential pews are not the only Gettysburg historic treasures to be found at this particular Presbyterian Church.

The first 50-star flag of the United States is also on display, preserved in glass in the church entry.

For those who don’t presidential history, General “Ike” Eisenhower was elected the 34th president in 1952.

To honor his position as the president who presided over the addition of Alaska and Hawaii to the United States in 1959, he was presented with the first 50-star United States banner.

Because he lived in a farm outside of Gettysburg, this important historic artifact was later donated to the church Eisenhower attended.

St. Francis Xavier Catholic Church on High Street in Gettysburg was erected in 1853 and served as a hospital during the Civil War.

Between 200 and 250 of the most seriously injured from the battle’s aftermath were treated at the church by the Nuns from the Sisters of Charity in nearby Emmitsburg, Md.

These good Samaritans are now memorialized in one of the stunning stained class windows of the church.

One of the sisters wrote of the soldiers:

“They lay on the pew seats, under the pews, in every aisle, and there was scarcely room to pass among them in the sanctuary and in the gallery . . .”

Gettysburg resident Salmone “Sallie” Myers, who resided a few doors down, recalled seeing the suffering that took place there.

“I knelt by the first one inside the door and said ‘what can I do for you.’ He looked up at me with mournful eyes and said ‘Nothing. I am going to die.”

He was Sergeant Alexander Stewart of the One Hundred and Forty Ninth Pennsylvania Volunteers. Stewart soon died of his wounds.

Gettysburg Historical Sites Were An Eye Witness To History

Just down the street from the Catholic Church on High Street stands The Academy Bed and Breakfast.

Like a handful other Gettysburg historical sites, this building carries the proof of the Battle of Gettysburg with an artillery shell that is still lodged in the brick exterior.

Other buildings that still have artillery shells include:

➡️ A cannonball embedded in a private brick home on Baltimore Street, directly across from Breckinridge Avenue.

➡️ A cannonball on the building on York Street connected to the Wills House. The cannonball is above the “Ice” in the Ice Cream sign.

➡️ There are two projectiles in private homes on Stratton Street, almost directly across from each other.

➡️ The Sheads House shell is located on Buford Avenue across from the Lutheran Seminary. The unexploded shell can be seen to the left of the top window below the awning.

➡️ There is also a shell located in a house on the Lutheran Seminary grounds.

The Seminary president at the time of the Battle of Gettysburg was an ardent abolitionist who was slated for capture when the Confederates invaded Gettysburg.

He evaded the troops by going into hiding, but his home was ransacked. There is a cannonball embedded in the wall on the porch near the door and under the protruding roof.

There are also a myriad of bullet-damaged houses (including the Jennie Wade House and Museum where the only civilian was killed during the battle).

For A Colonial-Era Experience, Visit the Fort Frederick Market Fair

There is so much to explore in the town of Gettysburg and the surrounding battlefield that it’s easy to run out of time.

Keep your eyes open though for all of the historical surprises that others pass by.

You never know what you might stumble across that is hidden in plain sight.

If you want more information on things to explore in Gettysburg, pick up a copy of the Gettysburg Handbook and Insider’s Travel Guide.

Planning a Trip To Gettysburg?