The splendor of Middleton Place Plantation in S.C.

Middleton Place Plantation is the perfect bucket list destination if you enjoy old houses, American history, magnificent gardens and centuries-old trees, like I do.

This historic plantation was established in the 1730s by planter John Williams, who selected the site for its view of the Ashley River. Future residents of the house played roles in both the Revolutionary War and the Civil War, and the sweeping, colorful and lavish grounds are noted as being the oldest landscaped gardens in the United States.

Middleton Place is located in the heart of the historic Plantation District along the Ashley River just 15 miles from downtown Charleston, South Carolina. 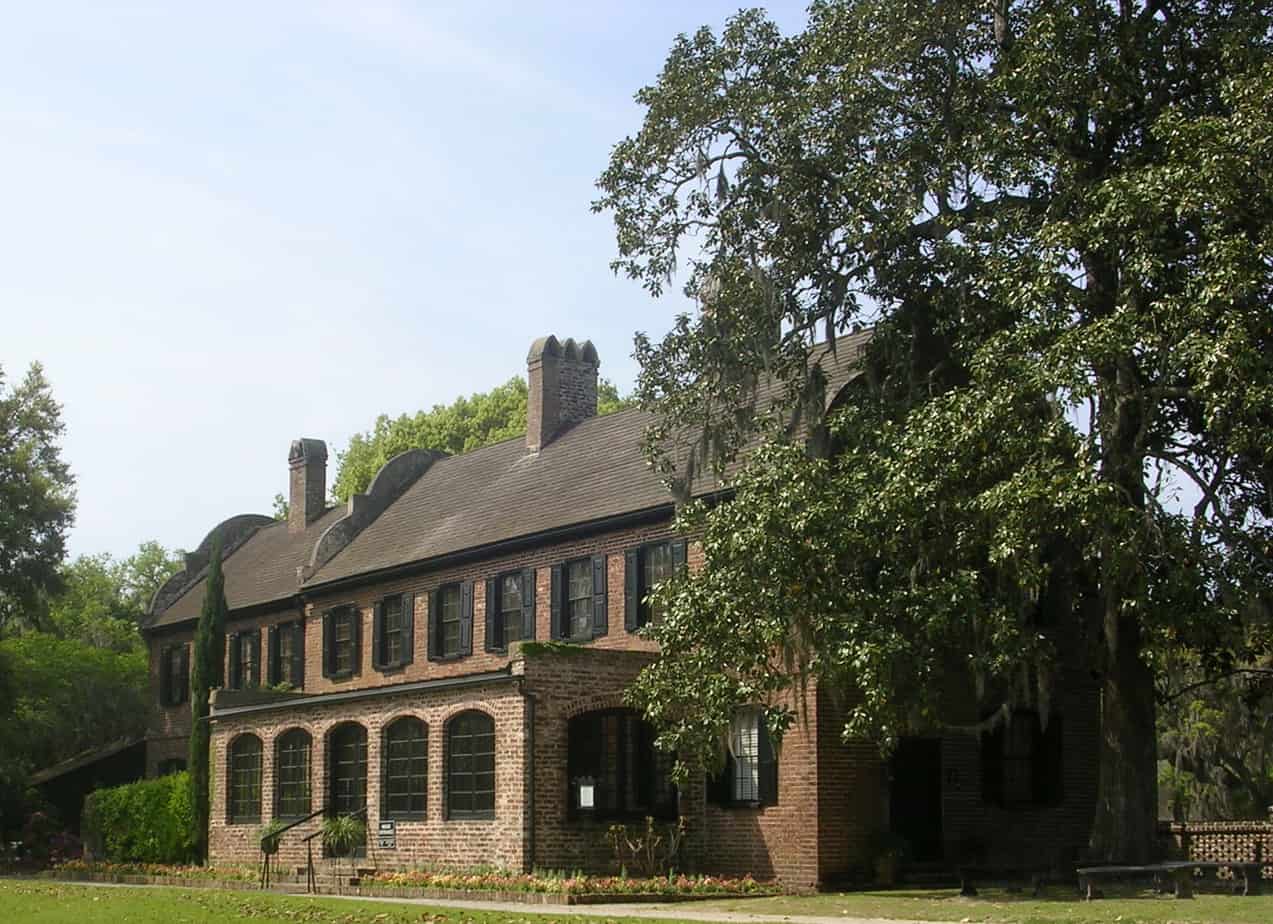 The house at Middleton Place Plantation.

After the death of the Williams, the plantation became part of the dowry of his daughter, Mary, who married Henry Middleton in 1741. Henry continued acquiring land, eventually becoming one of South Carolina’s wealthiest planters. At one point, he owned 20 plantations consisting of 50,000 acres and owned 800 slaves.

The original brick main house of Middleton Place plantation stood three stories tall and was completed around 1741. In 1755, Middleton added two, two-story free-standing wings, or “flankers” to each side of the house, as was common during the time period. The north wing contained a library and ballroom, while the south wing was used as a guest house.

Unfortunately all three buildings were ransacked and torched in 1865 at the close of the Civil War. The only one to partially survive was the South Flanker, which was restored and expanded to serve as the family residence after the war. Repairs began in 1869 and included a new roof and Dutch gable ends. 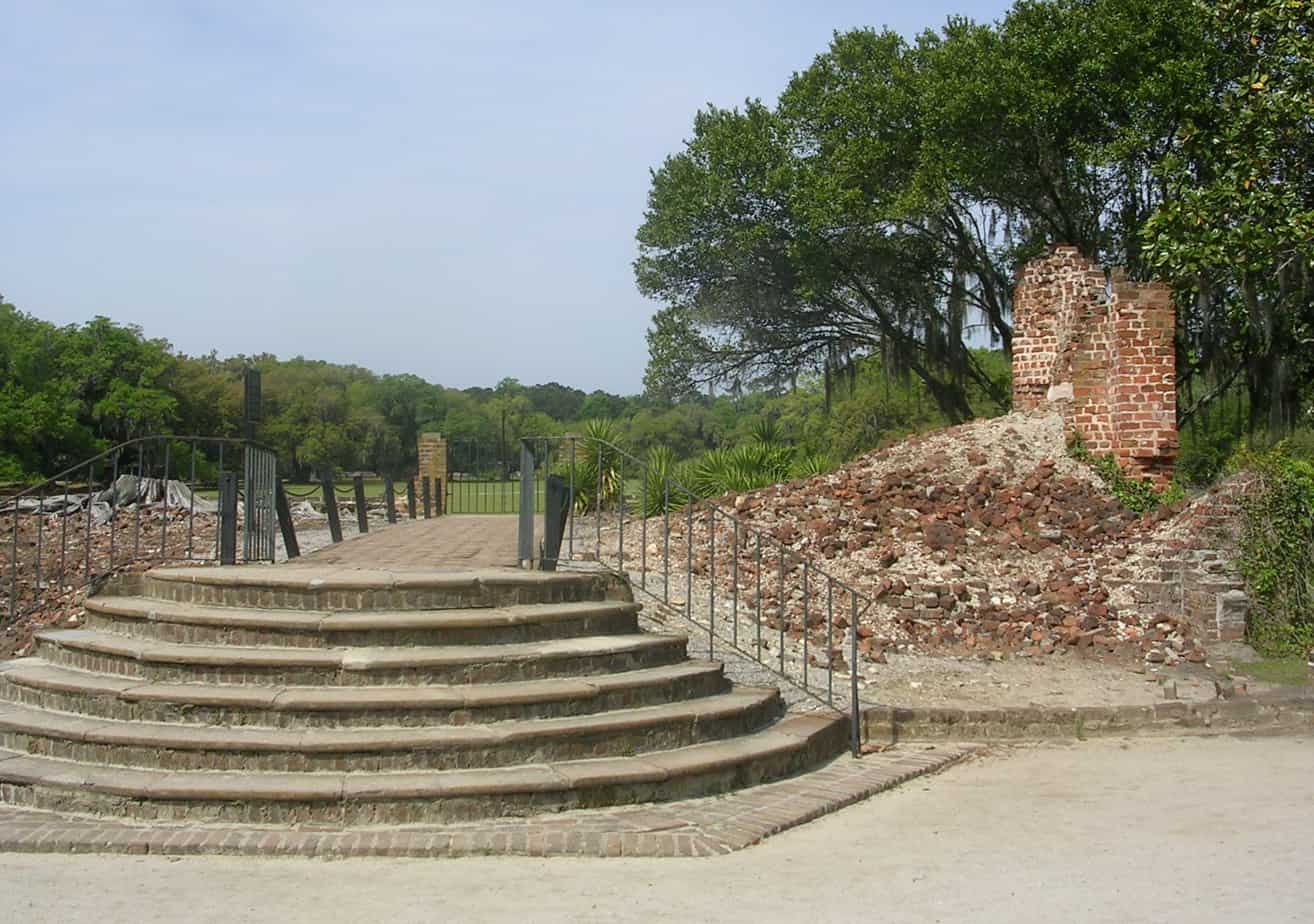 Rubble still remains at the site of the main house at Middleton Place Plantation.

Thus strengthened, the South Flanker survived Charleston’s Great Earthquake in 1886, that felled the gutted walls of the other buildings. The South Flanker continued to serve subsequent generations until becoming a House Museum in 1975, where visitors can see family furniture, portraits, silver and documents.

The People Behind Middleton Place Plantation

From 1741 to 1865, this property was home to four successive generations of the Middleton family, each of whom played an important role in our history. Henry Middleton was active in politics and served in the First Continental Congress. After the death of his wife Mary in 1761, Henry moved to a small house north of Charleston, and passed the plantation on to his son, Arthur, who had been born in 1742.

In 1776, at the outbreak of the American Revolution, Arthur became one of the signers of the Declaration of Independence. Four years later, at the height of the war, the British landed several thousand troops at Charleston. They not only ransacked Middleton Place, beheading many of the statues and looting the plantation’s artwork and furniture, they also captured Arthur Middleton. He was held in St. Augustine, Florida, as a prisoner of war until his exchange in July of 1781. In 1783, the surrender terms of removing British troops from the Southern colonies was signed at Middleton. Arthur died in 1787 at the age of 45. His tomb is located within the gardens.

The Next Generation of Middletons

Arthur’s son Henry (1770-1846) oversaw much of the plantation’s transition from a country residence to an active rice plantation. He also served as governor of South Carolina. Upon Henry’s death in 1846, Middleton Place passed to his son, Williams Middleton (1809-1883) who went on to sign the South Carolina Ordinance of Secession in 1860. South Carolina’s actions led to the attack on Fort Sumter in April 1861, the spark that ignited the Civil War.

On February 22, 1865, less than two months before the end of the war, Union troops from the 56th NY Volunteers set the house on fire and killed livestock, including water buffalo that had been imported as experimental draft animals, suited to the deep muck in which rice was grown. 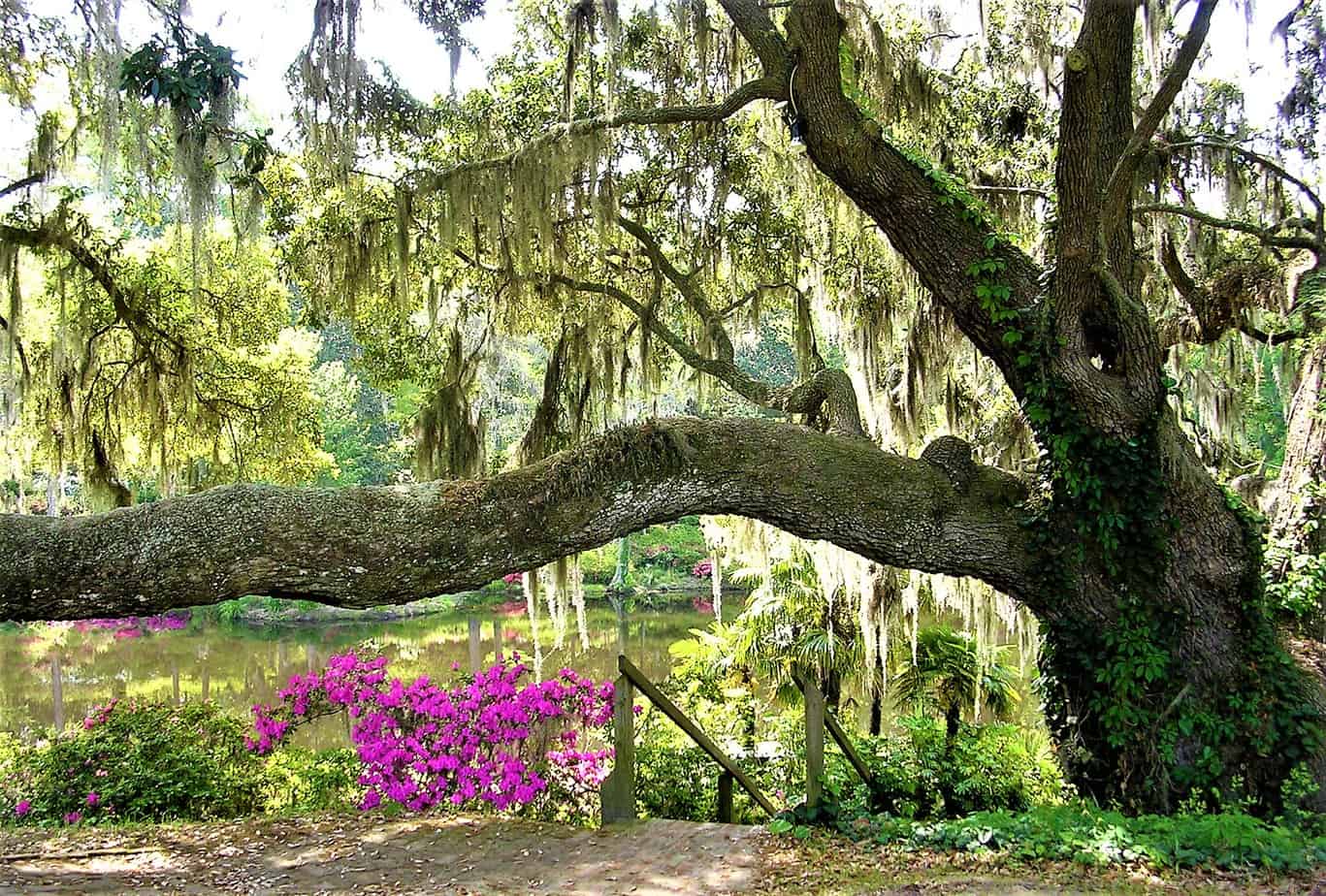 The trails through the gardens at Middleton Place Plantation are beautiful.

The Gardens At Middleton Place Plantation

The beauty and majestic splendor of the gardens at Middleton Place Plantation are impossible to describe.

It reportedly took 100 slaves almost a decade to complete the wide-sweeping terraces, walks, and artificial lakes that spread to the river and marshland beyond. In addition to the stunning views, there are acres of landscaped gardens that were first laid out in 1741 by Henry Middleton.

The estate now consists of 110 acres, with 65 acres of gardens. The gardens at Middleton Place are said to be the most authentic expression of the 18th-century formal garden ideal — a marriage between Man and Nature. Although enhanced and expanded over the years, the original framework of Henry Middleton’s plan prevails.

In 1941, the Garden Club of America cited Middleton Place as not only the oldest, but also the most important and interesting garden in America.

Henry Middleton’s friendship with French botanist resulted in the first camellias grown in an American garden (1786). Three of the four camellias planted at the corners of the main area survived and grew to 15 feet. The next generation of Middleton’s expanded and enriched the gardens, introducing the first Asiatic azalea and the crap myrtle, one of the oldest in America. 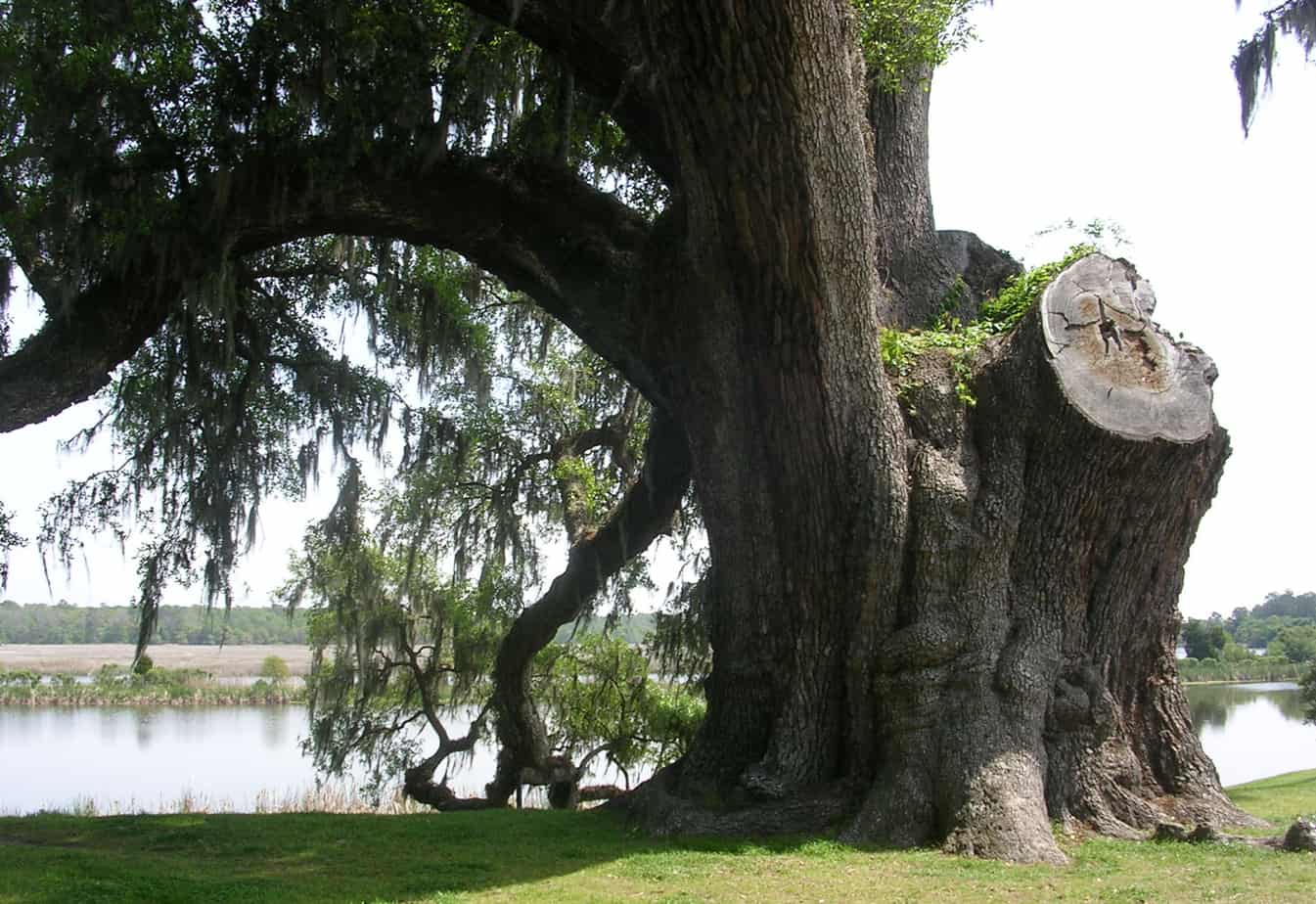 This ancient tree at Middleton Place Plantation is estimated to 600 to 700 years old.

Anyone who knows me, knows how much I love old trees. When I say “old,” usually that means 200 to 300 years old. At Middleton Place, that means 600 to 700 years old. The tree in the picture above, called the Middleton Tree, sits right on the Ashley River. As you can see, it recently lost a limb – which is probably about four feet in circumference. Imagine what this tree has witnessed in its lifetime.

Other Buildings At Middleton Place Plantation

The Middle Place Plantation Rice Mill is located immediately east of the Butterfly Lakes, where a natural east-flowing stream empties into the Ashley River. Williams Middleton built the mill in 1851 as he began more intensive planting at Middleton Place. The mill has undergone several alterations in modern times.

The Middleton Place Plantation Springhouse, located behind the south flanker, was built in the 18th century. In 1850, the second story of the springhouse was converted into a chapel.

The Stableyard at Middleton Place Plantation is a demonstration area that includes a barnyard and stable, both built in the 1930s.

Can You Tour Middleton Place Plantation?

Yes, you can tour Middleton Place Plantation. General Admission includes access to 65 acres of formal landscaped Gardens, a look at 18th and 19th century plantation life with exhibits, displays, artisans and historic animal breeds in the stable area. There are also Guided Garden Tours and Discussions on the Enslaved People of Middle Place throughout the day.

Tickets for self-guided tours of the House Museum can be purchased upon arrival at the Visitors Center. The House Museum is open 10 a.m. to 4 p.m. Tuesday – Sunday and Monday noon to 4 p.m. 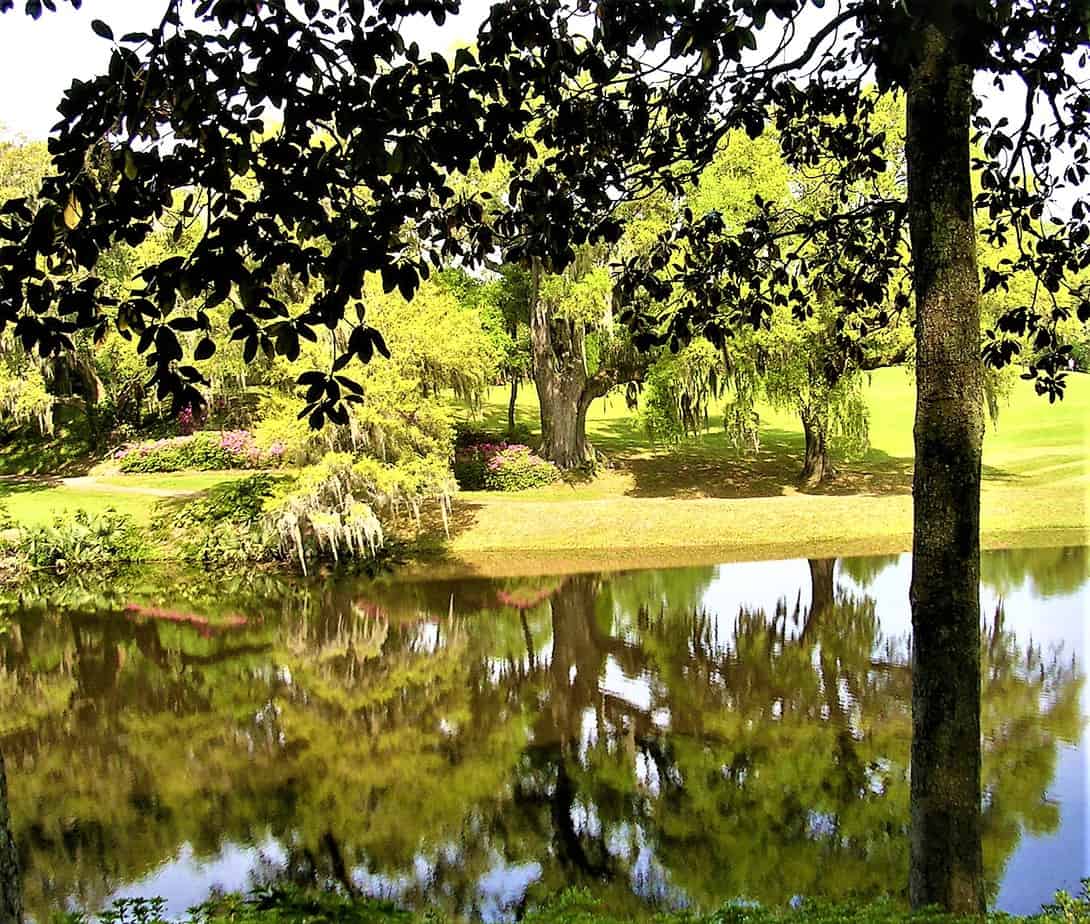 Dress comfortably for the weather and wear walking shoes. Middleton Place Plantation is primarily an outdoor experience, so be aware of weather conditions. While rarely needed, visitors to any outdoor venue in the Low Country are also well-advised to carry insect repellent.

Parking is free at Middleton Place for both daily and special event visitors. Spaces for buses and oversized vehicles are available behind the Garden Market and Nursery. Handicapped parking is available near the Visitor Center in the regular visitor parking lot (valid tag required).

Due to free roaming livestock and natural predators, pets are not allowed at Middleton Place. Highly trained service animals are permitted throughout the property; however, emotional support animals must stay in the main visitor parking lot. Reminder: Do not leave your pet in your parked vehicle if weather conditions will result in dangerously high interior temperatures.

This is what I saw during my visit to Middleton Place Plantation.

Why You Shouldn’t Bring Pets To Middleton Place Plantation

How Long Does It Take To Tour Middleton Place?

Most people recommend at least two hours to tour Middle Place Plantation. The house tour, if you choose to do it, is 45 minutes, and the gardens and stableyards are immense with much to see.

Can You Ride A Horse At Middle Place Plantation?

Yes you can take a guided trail ride on horseback at the Equestrian Center at Middleton. No experience is necessary for the one hour guided, narrated horseback riding tours.

If you enjoy nature, a trail ride is a great way to see the Low Country of South Carolina.

The Inn At Middleton Place

If you want to stay nearby and get free general admission, you can book at a room at the beautiful and serene Inn at Middleton Place. The rooms feature floor to ceiling windows, cypress wood paneling, seasonal fireplaces, and sweeping river views. Guests of The Inn receive complimentary access to the Middleton Place Plantation.

The History Of Nottoway Plantation