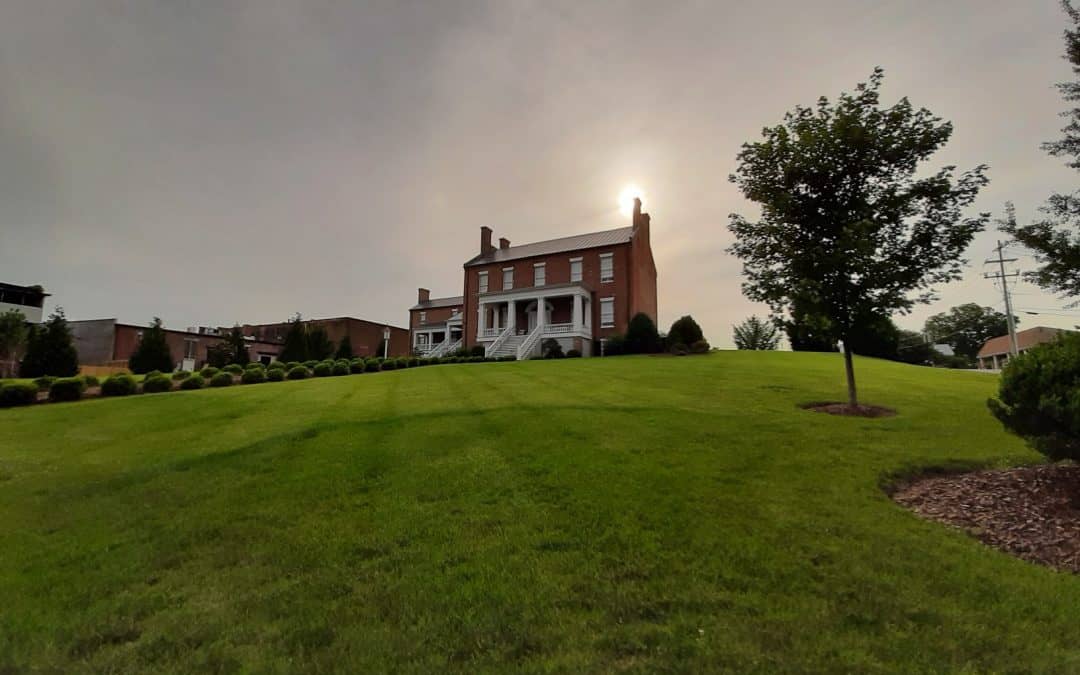 A trip to Greeneville, Tenn., is not complete without learning about the Dickson Williams Mansion history. This enduring monument to the past has stood as a silent witness to our past for more than two centuries—a history that includes the final days of General John Hunt Morgan, the “Thunderbolt of the Confederacy.”

Started in 1815 and finished around 1821, the home became celebrated for its lavish parties hosted by owner Catharine Dickson Williams and her husband Dr. Alexander Williams. Known as the “Showplace of East Tennessee” for both its craftsmanship and hospitality, the mansion welcomed visitors that ranged from presidents Andrew Jackson, James Polk and Andrew Johnson, to other diverse and notable figures like Davy Crockett and the Marquis de Lafayette. 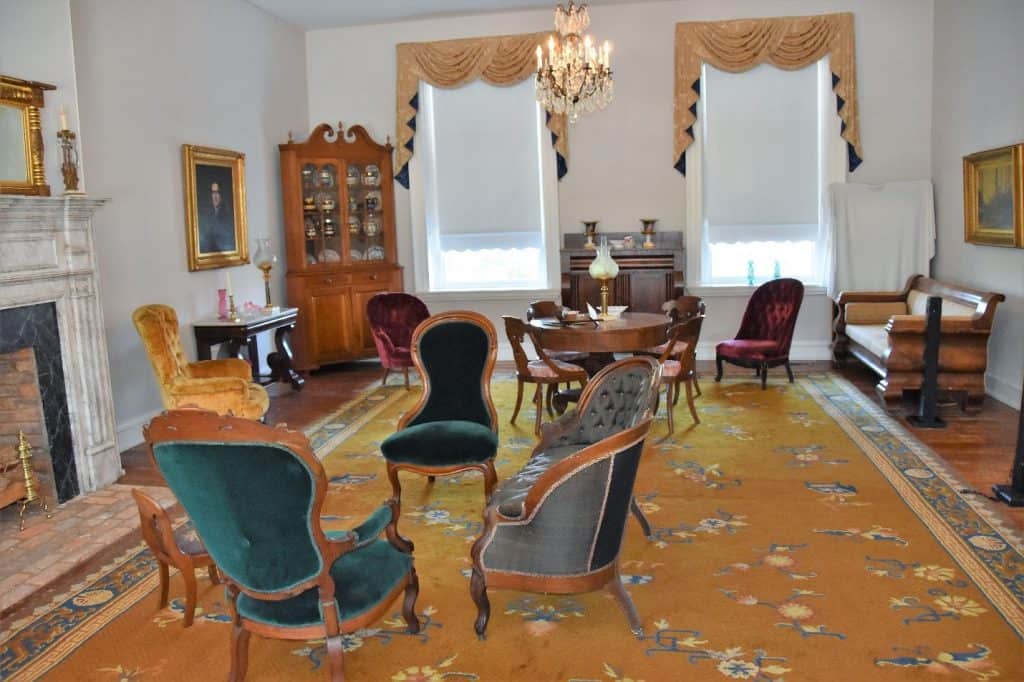 This parlor in the Dickson-William Mansion has quite a history. It entertained three presidents and other notable historical figures including Davy Crockett and the Marquis de Lafayette. John Hunt Morgan was honored with a celebration here the night before he was killed.

Standing on a small rise near the center of town, the large brick dwelling conveys an image of peace and prosperity today, but during the Civil War it was truly a house divided.

Catharine and Dr. Alexander Williams had four children, two of whom had ties to the Union and two to the Confederacy. Their only daughter married a former federal congressman, and one of the sons was a Union soldier. Two other sons served in the Confederate army, with one of them being a captain on General John Hunt Morgan’s staff.

Somehow, Catharine conveyed a sense of neutrality during the war, entertaining officers from both sides of the conflict. Union generals Ambrose Burnside and Alvan C. Gillem both stayed at what is now known as the Dickson Williams Mansion, as did Confederate generals James Longstreet and John Hunt Morgan. 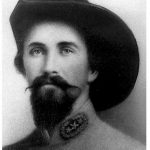 John Hunt Morgan was by all accounts a handsome man whose reputation as a gallant and courageous fighter had been forged during a short engagement in the Mexican War in 1848.

When the Civil War began, he opposed secession as impractical, but when Union troops occupied his hometown of Lexington, he gathered a volunteer group of “Lexington Rifles” and enlisted in the Confederate army.

Morgan didn’t waste any time after that. He and his men swung into action, galloping through Union lines, burning bridges, spiking railroads and taking prisoners. He was soon a darling of the Southern papers who hailed him for his “knightly and heroic deeds.” But his popularity in the South was matched by his condemnation in the North, where he was called “one of the greatest scoundrels that ever went unhung.”

The loose discipline of his men and his own inability to follow the chain of command caused him to start losing the support and trust of his own superiors. But his dashing raids continued to inspire hope in the South, lending an air of mystery and romance to the harsh slog of war.

Morgan’s peculiar magnetism made him a favorite among Southern women who fought to claim a lock of his hair or that of his equally-famous horse Black Bess. But after losing his first wife in 1861, Morgan set his sights upon Martha “Mattie” Ready and then courted her as his chosen bride. They were married in December of 1862.

As the war progressed, Morgan distinguished himself in battle, galloping into the jaws of the enemy with saber raised. The Southern newspapers loved the image, and as his forays against the enemy increased, so did his reputation. He was popular with his men because he gave them plenty of action. And he was admired by the ladies for his gentlemanly respect and chivalry.

But the luck of the “Kentucky Cavalier” ran out in the spring of 1863. Captured during a failed raid, he was unexpectedly thrown into a well-guarded penitentiary, rather than a military prison camp.

Those from both the North and the South thought the days of the “Thunderbolt” were surely gone for good.

Back From The Storm

After months of solitary confinement, Morgan and a handful of his officers managed to escape through a tunnel and make their way South. The escape was made November 27, 1863, which was coincidentally the same day his first daughter was born. She lived only one day.

Reunited with his wife and soon ready to take to the saddle again, Morgan’s reputation as a hero and warrior soared to new heights. In the spring of 1864, he collected a dubious mix of deserters and miscreants and went on another raid—but this time even the Confederate sympathizers were shocked. His undisciplined men looted stores, pillaged and robbed, leaving a trail of destruction in their path. 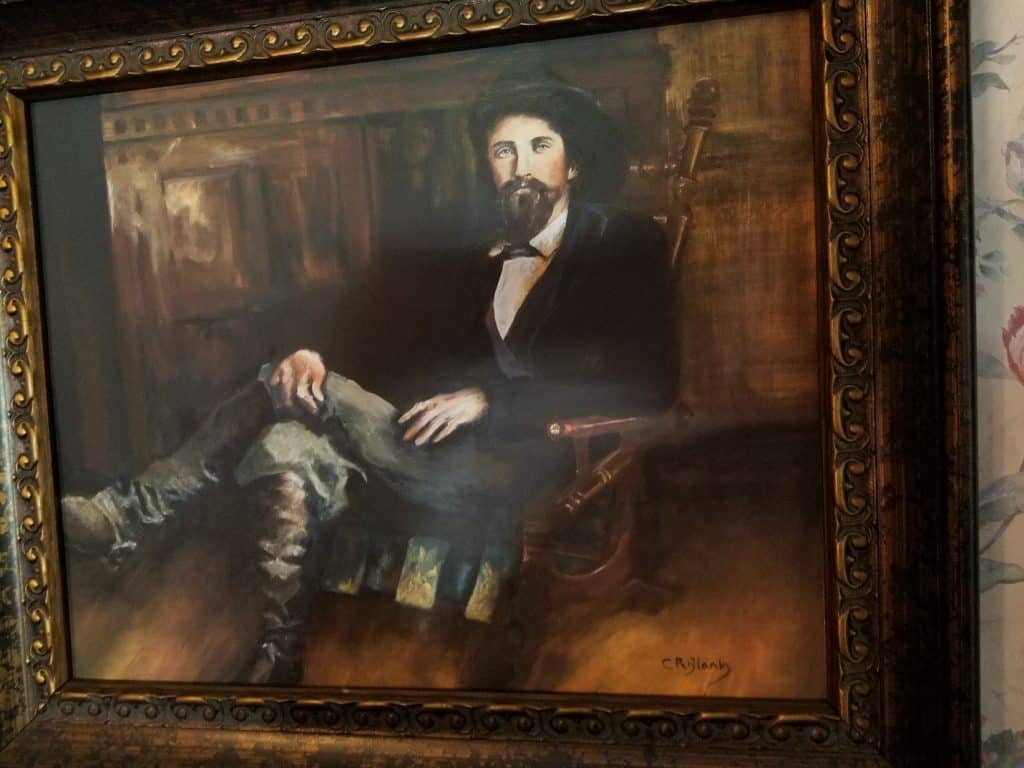 A portrait of John Hunt Morgan hangs in the bedroom at the Dickson Williams Mansion where he spent his last night.

After that incident his commanders “unhorsed” Morgan by giving him administrative duties. Dissatisfied with his new assignment, Morgan saw his chance for action in late 1864 when he received word that a Union force was being sent to seize Greeneville, his hometown.

In the beginning of September, Morgan gathered his men and rode out to surprise the federals. Ironically, that very morning he had been relieved of his command pending an inquiry into the shocking behavior of his troops during his last raid. Whether the order arrived too late—or he chose to ignore it—is yet unclear.

When they arrived in Greeneville, Morgan became a part of the Dickson Williams mansion history. He chose to lodge there both for its obvious comfort and the fact that it was the home of one of his staff. Though welcomed enthusiastically by the family, he was cautioned that the area was crawling with Union sympathizers—a warning that went unheeded. 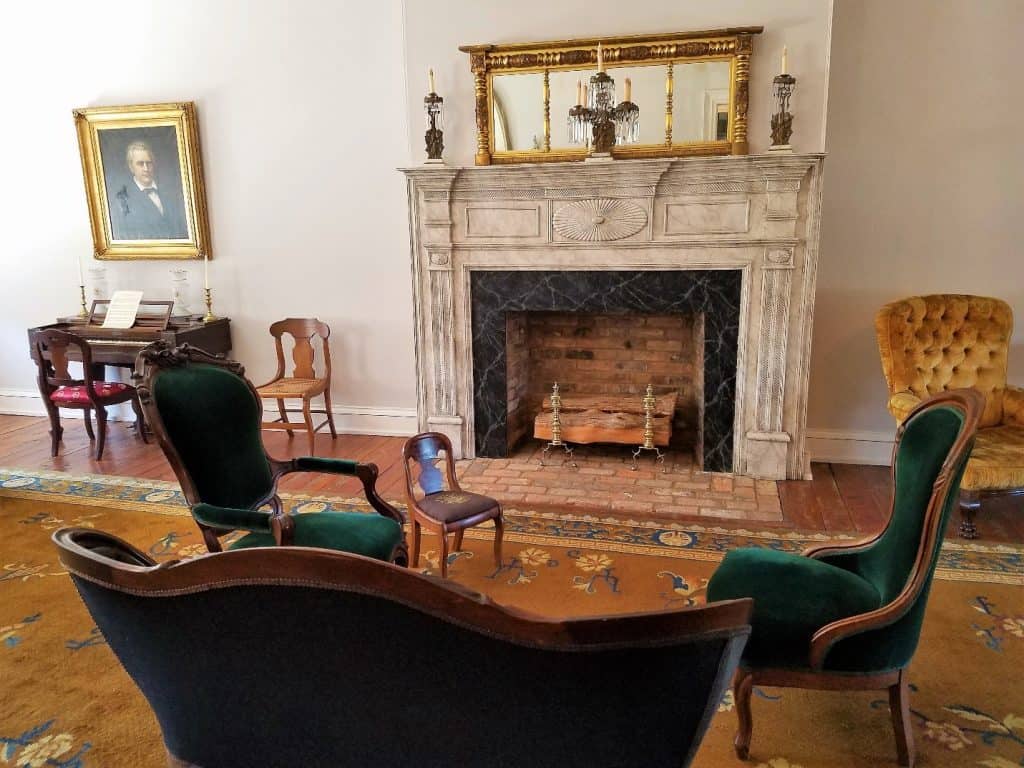 Parlor at the Dickson-Williams Mansion.

As Morgan was enjoying a reception in his honor, trouble was brewing outside the warm and cheery house—and not just the kind that comes with clouds and rain. A local teenager was making his way to Bull’s Gap to inform the Union commander that Confederate troops had arrived in Greeneville. The boy was reportedly resentful that a sack of flour had been stolen by the Southern soldiers.

Despite bad weather that had enveloped the region, the Union commander decided to advance and gain the advantage of surprise. This, while Morgan was being toasted by the Southern sympathizers of the town who were anxious to get a glimpse of the dashing cavalier they had heard so much about.

With the rain still falling and the festivities winding down, Morgan amended an earlier order to his men to prepare for an attack at dawn. Assuming there would be no attack in the rain, he pushed the time back to seven a.m. 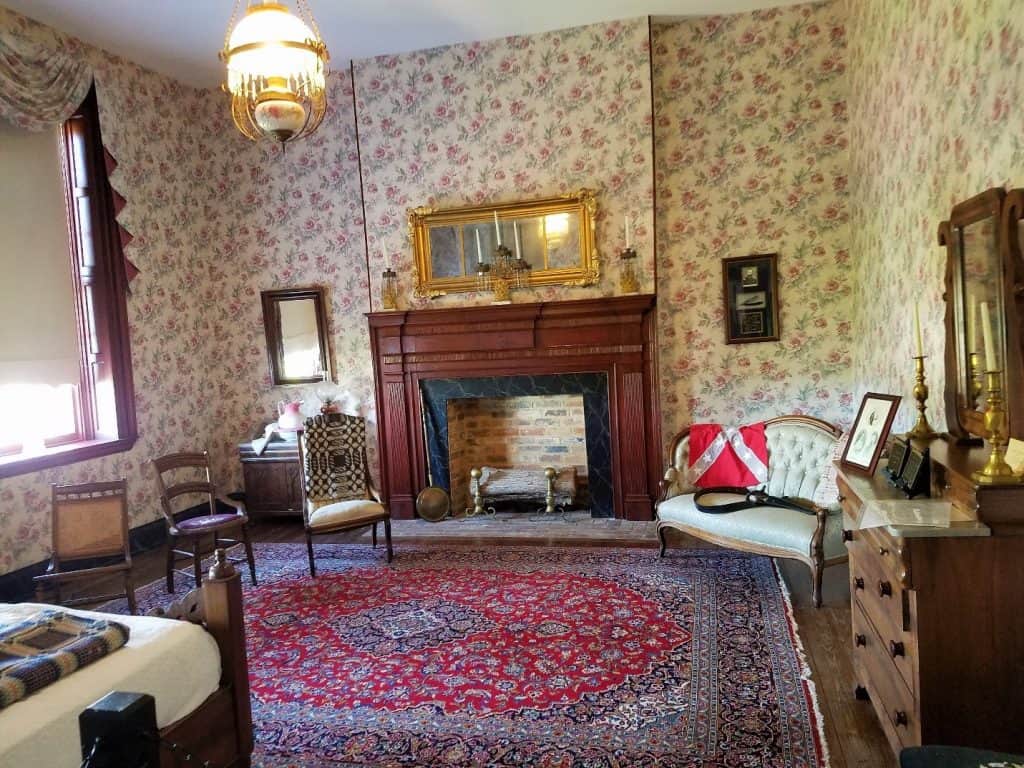 After the party, Morgan retired to an upstairs bedroom, not knowing that Union forces were busy slogging toward him in the mud.

At about dawn, a “citizen” reportedly rode into the Union ranks reporting that Morgan’s Raiders were in town and the federals were marching into a trap. The person also mentioned that Morgan himself was staying at the Williams house.

(Some have attributed this report to Mrs. Williams’ pro-Union daughter-in-law who was staying at the house at the time, though no actual proof exists).

Hearing this news, the Federal commander sent two companies of cavalry to dash into the town, surround the Williams mansion, and bring Morgan out “dead or alive.”

The surprise worked well. Some of Morgan’s pickets were immediately captured and disarmed, while others managed to escape. Awakened by the melee, Morgan grabbed two loaded pistols, and ran downstairs clad in only a nightshirt and slippers.

When he met Mrs. Williams at the kitchen door he asked her, “Where are they?”

“Everywhere.” She hurriedly pointed to the Episcopal Church next door. “They are onto you, General! Hide! Quick!” 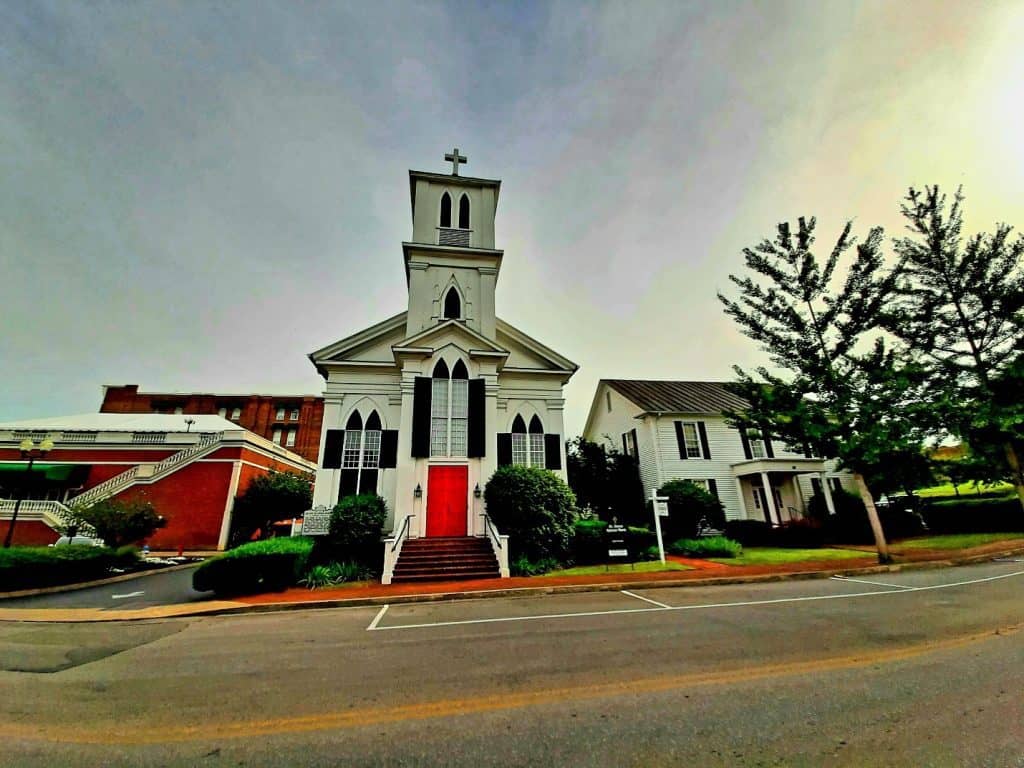 The church near the gardens of the Dickson Williams Mansion where John Hunt Morgan hid from the Yankees.

Leaving his uniform and boots upstairs, Morgan grabbed a coat off a peg and ducked out the back door and into the church basement. When he heard running boots above him, he knew it was only a matter of time until he would be discovered, so he slipped back outside into the Williams’ formal gardens.

He was soon joined there by his aide, Captain Rogers, who told him they were surrounded and there was no chance of escape. Morgan, who was no doubt thinking of his time in the penitentiary, handed one of his pistols to Rogers and said, “We must try.” 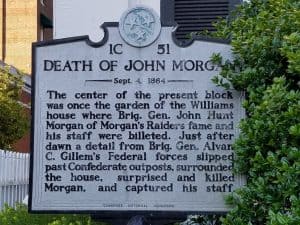 Ducking down below the trimmed box hedges, they headed toward the stables for their horses until they noticed the approach of a man wearing a brown denim jacket instead of Union blue. Morgan and Rogers emerged from the shrubs, taking him to be a Confederate rescuer.

Unfortunately it was a soldier who had previously served under Morgan, but deserted and joined the Union army. He ordered both men to surrender.

Rogers obeyed, dropping his pistol, but Morgan ducked and ran toward the stables for his horse. The soldier fired a shot, causing John Hunt Morgan to fall face forward into the mud. Before dying, he cried out, “Oh, God! Oh, God!” 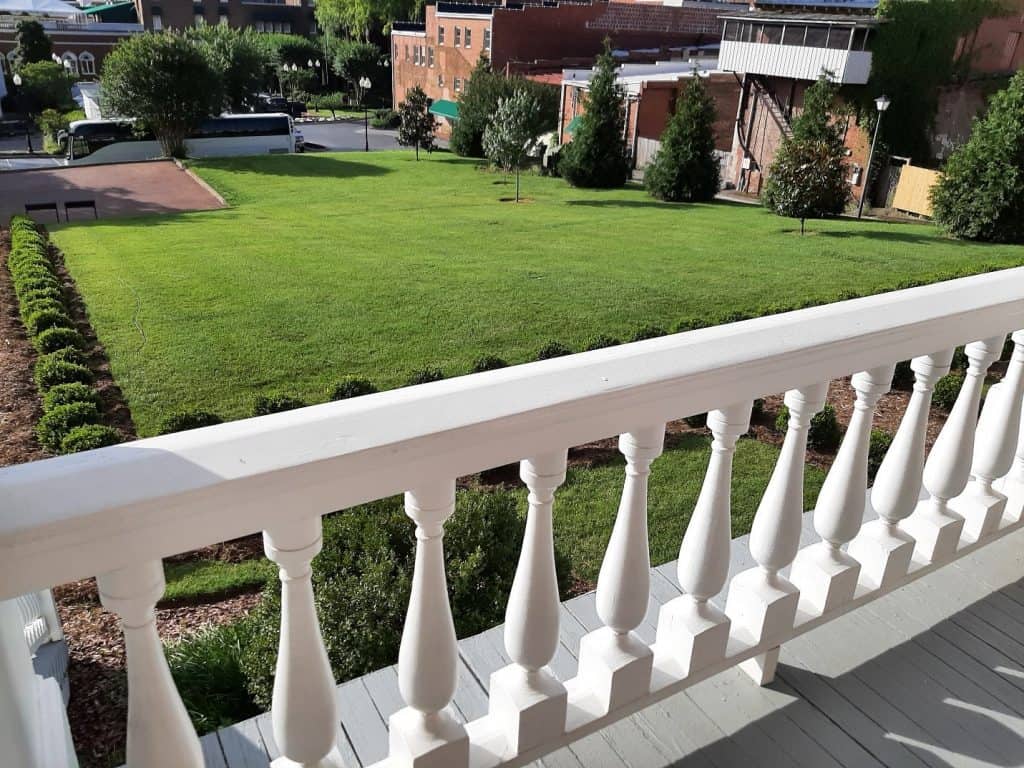 The view from the porch of the Dickson Williams Mansion where General John Hunt Morgan was killed. This area would have been garden during the Civil War.

A Union officer soon approached and ordered one of Morgan’s captured staff to identify the body. The Confederate wiped the mud from Morgan’s face, turned to his captors, and wailed, “You have just killed the best man in the Confederacy!”

Those that witnessed the next actions complained bitterly when their commander’s body, in its bloody nightshirt, was roughly slung across a soldier’s horse. After parading Morgan’s body in front of the Union troops, it was eventually returned to the Williams mansion, where he was reverently cleaned and dressed.

The Confederates removed Morgan’s body from the house through an honor guard of raised sabers, and transported it to Abingdon, where it was met by his pregnant wife, Mattie. She had gone from wife to widow in 630 days.

As the story got told and expanded and enhanced, Southerners were outraged. Rumors were spread that Morgan’s naked body had been dragged through the mud and abused. It was even believed by many that he had been betrayed by Lucy Williams and murdered in cold blood after he had surrendered.

But his widow, the “Belle of Tennessee,” knew better. Morgan had vowed never to be captured after his experience in the penitentiary.

After funeral services in Abingdon, Morgan’s body was taken to Richmond where it was laid in state in the Confederate House of Representatives, and was viewed by thousands.

It was then interred in a vault until 1868, when it was returned to Lexington. He was buried with great ceremony, an event that attended by both his supporters and former enemies.

Seven months after the death of General Morgan, Mattie gave birth to a daughter, and named the child after her father. Johnnie Hunt Morgan was born on April 7, 1865, just two days before General Robert E. Lee’s surrender at Appomattox.

The baby was a great comfort to Mattie in her grief. In a letter to her mother-in-law a few months later, Mattie wrote: “She has indeed proved a blessing to me direct from God, and the only happiness I look forward to in the future is that of rearing her. She is said to be a perfect little Morgan in appearance.”

Johnnie grew up and married the Reverend Joseph W. Caldwell, a Presbyterian minister from Selma, Alabama. But on June 28, 1888, at age 23, shortly after her honeymoon, Johnnie died of typhoid fever, thereby leaving no direct descendants of John Hunt and Martha Ready Morgan. 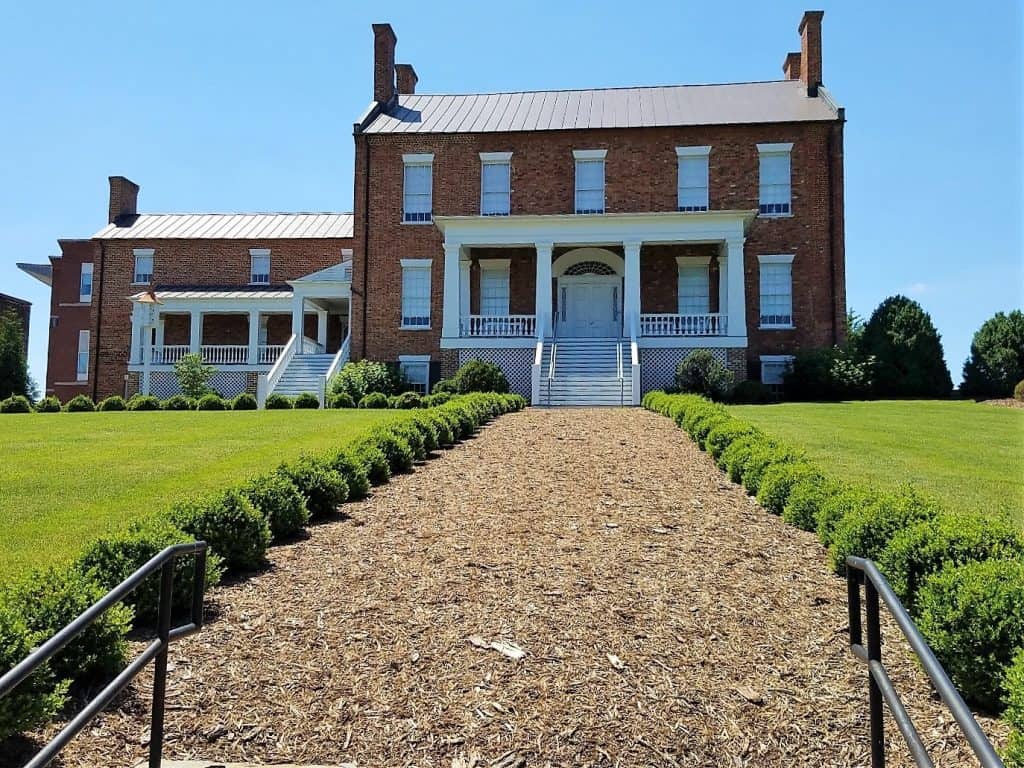