The Museum Of The American Revolution 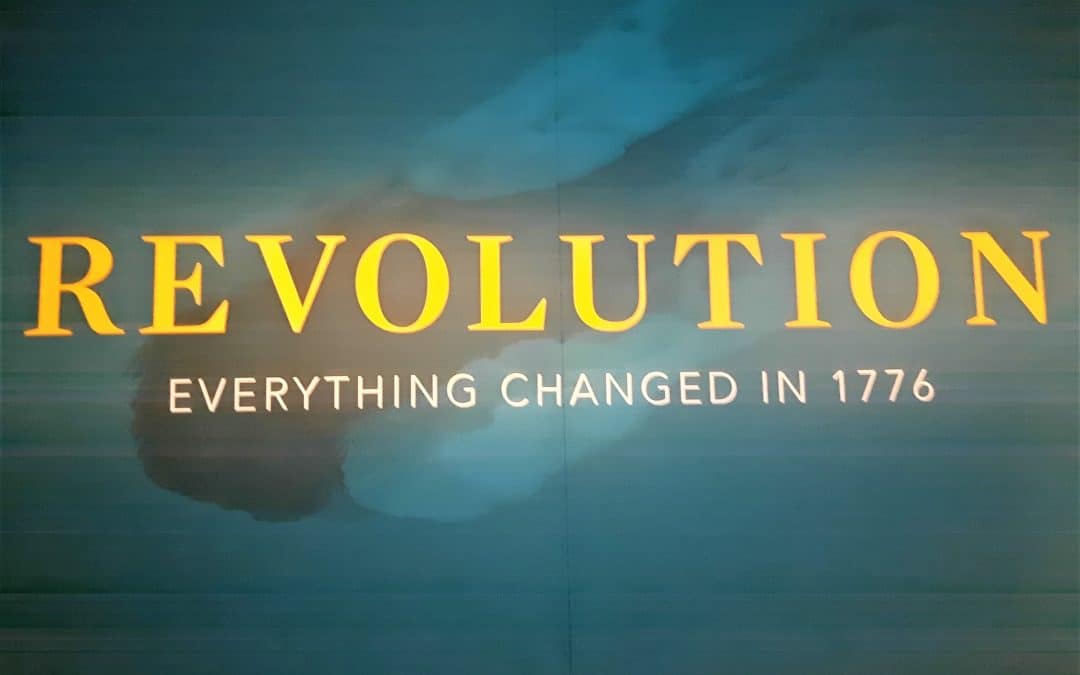 Past Lane Travels contains affiliate links and is a member of the Amazon LLC Associates Program. If you make a purchase using one of these links, we may receive compensation at no extra cost to you. Read our disclaimer for more information.
A Guide To The Museum Of The American Revolution In Philadelphia

The Museum of the American Revolution is a true gem in Philadelphia that is located just blocks away from some of the most important historical sites in the nation.

If you’re planning to visit Independence Hall or the Liberty Bell, make sure you make time to take in this museum as well.

“The Museum of the American Revolution in Philadelphia is an enthralling treasure chest of artifacts and exhibits from our nation’s founding. Engaging. Captivating. Fascinating.”
— Jessica James

Unlike the museums of yesteryear that involved walking into dimly lit rooms that showcased historical artifacts, this American Revolutionary War Museum allows you to see, touch, feel — and even smell — what it was like to live during the American Revolution.

If you love American history and are planning a trip to Philadelphia, read this guide and learn everything you need to know about the Museum of the American Revolution in Philadelphia. 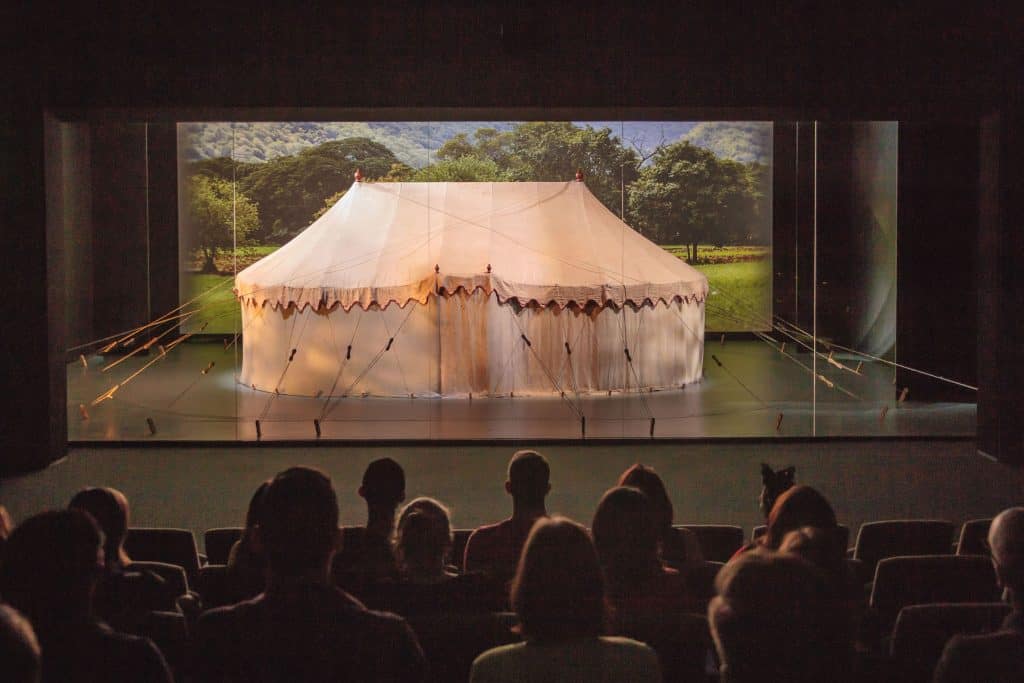 Image courtesy of the Museum of the American Revolution. Visitors gather to see the war tent used by George Washington.

Even if you’re not a history buff, prepare for goosebumps when you watch a short movie production about Washington’s Headquarters Tent — and then see the unveiling of the actual tent!

It may seem strange to feel so much emotion over a tent, but there is something special about seeing a piece of history that was used daily by such an important historical figure as George Washington.

Imagine the stories it could tell!

I ended up writing an entire blog post just on George Washington’s War Tent because it was so impressive and historic.

Guide To The Museum Of The American Revolution

Even if you don’t usually like the theater experiences at other museums, don’t be afraid to give the ones at the Museum of the American Revolution a try. They are not boring documentaries, but are rather, both informative and entertaining. (And to me, truly captivating).

A core exhibition experience begins with a short film about the angry mob that tore down the statue of King George in New York City, while another recreates a scene that took place in Independence Hall.

Visitors can become truly immersed in the moment as they watch the decision making process and see the debates that took place as our Founders laid the groundwork for this new country.

Another memorable immersive-type theater experience puts visitors on the front lines of the Battle of Brandywine, with a rumbling floor, smoke effects and the smell of gunpowder.

These productions give a more in-depth understanding to the many artifacts that can be seen.

Artifacts At The Museum Of The American Revolution

There are more than 400 artifacts on display at the Museum, which includes some that are on loan.

Some of my favorite “authentic witnesses” of the Revolutionary War era include:

✅ Original silver camp cups from Washington’s field equipment. These were so beautiful, I thought they were reproductions.

✅ A large leather bag, known as a portmanteau, that carried Washington’s tent and bedding.

✅ A number of rare American military firearms that were made in Philadelphia, Connecticut and Virginia.

✅ A pair of baby booties, made from the pilfered coat of a British soldier. The booties belongs to Sgt. James Davenport of Massachusetts who lost two brothers in the war.

One of the exhibits that I didn’t get to see was the 13-star flag, known as the Commander-in-Chief’s Standard, which was used to mark General Washington’s headquarters. Due to its light sensitivity, it is only on display on special occasions.

The exhibits in the Museum of the American Revolution begin where the Revolution actually started, which was more than a decade before the “shot heard round the world” actually sparked the War for Independence.

Seven galleries show visitors how the American Colonists, most of whom were once proud British subjects, became ardent Revolutionaries.

Get a George Washington LIBERTY OR DIE scarf: CLICK HERE!

More than 20 figures appear individually or in historical vignettes or tableaux to recreate particular moments during the American Revolution.

These are absolutely the most life-like exhibits I have ever seen in any museum.

The picture below is just part of the scene featuring George Washington breaking up a brawl among soldiers in Harvard Yard. 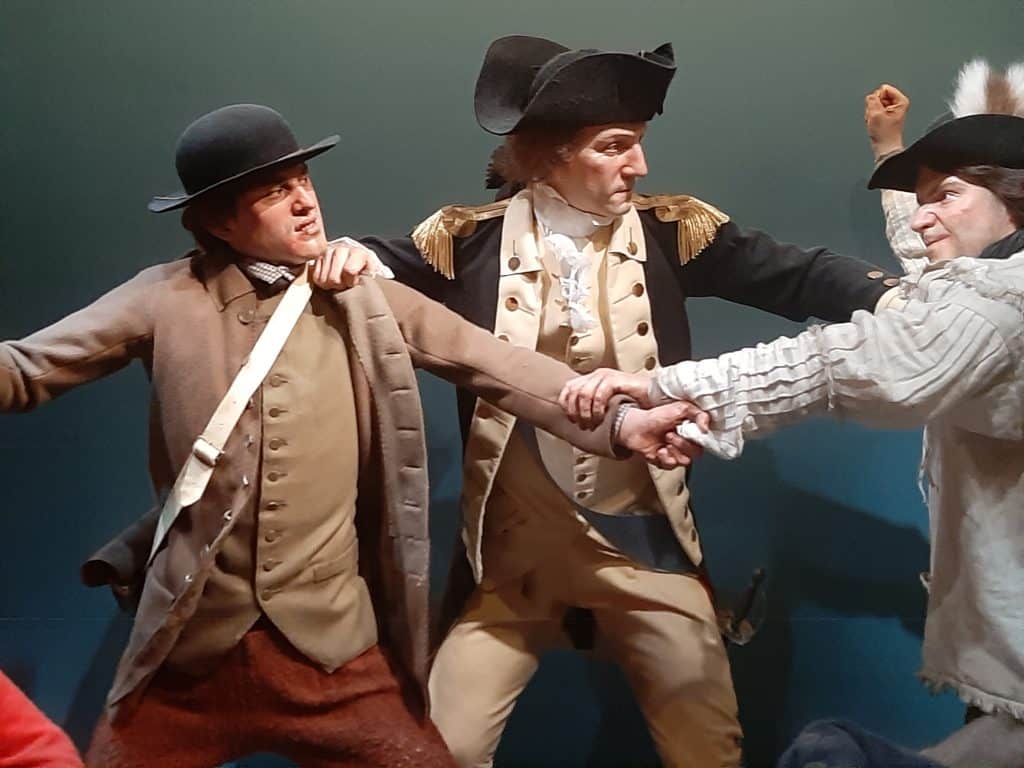 A life-like tableau of George Washington breaking up a fight in Harvard Yard.

Another displays shows the statue of King George II as it is about to be torn down by an angry mob in New York City.One of my favorite exhibits, (needless to say for those of you who know I love old trees), was the “Boston Liberty Tree.”

You can stand beneath the branches of this life-sized tree, and even touch a piece of an original Liberty Tree that stood during the American Revolution. 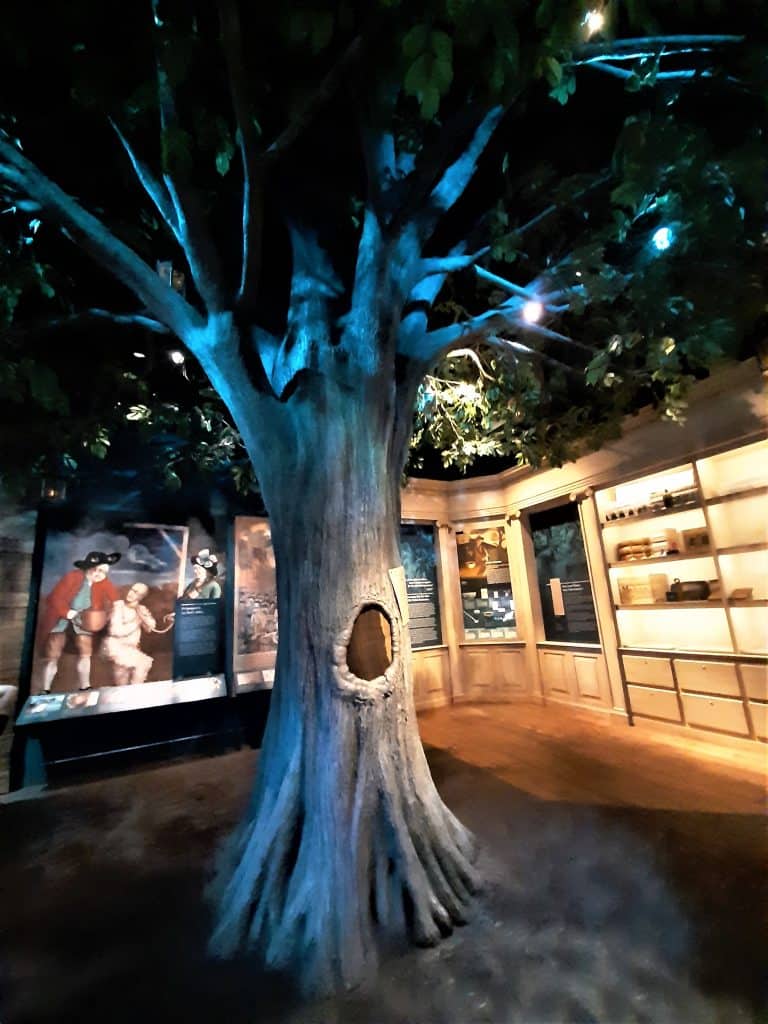 A reproduction of the Boston Liberty Tree that stands at the Museum of the American Revolution in Philadelphia.

Other exhibits include a replica of a privateer ship where you can climb aboard to experience the war at sea.

Anther interesting gallery displays life-size replicas of members of the Oneida Indian Nation. This is a very little known piece of American history and explains the tribe’s decision to break with the Iroquois Confederacy ad join the American cause.

Before you leave this exhibit, you get to see the next generation of American patriots. This is a surprise experience that you have to see in person to understand.

Is The Museum Of The American Revolution Worth It?

The Museum is truly a gem because it provides the opportunity to see, touch and even experience aromas from the Revolutionary War era.

What aromas? How about sap from pine needles used on battleships or tea leaves from the type of tea that was tossed during the Boston Tea Party.

You can also smell the scent of gunpowder when you experience the Battle of Brandywine.

You can breeze through the museum and just hit the highlights or really take your time to get a true understanding of how ordinary citizens rose up and sparked the war that gave birth to a new country.

There are lots of hand’s on activities for children as well, especially on the bottom floor.

Book Now and Save at Hotels.com 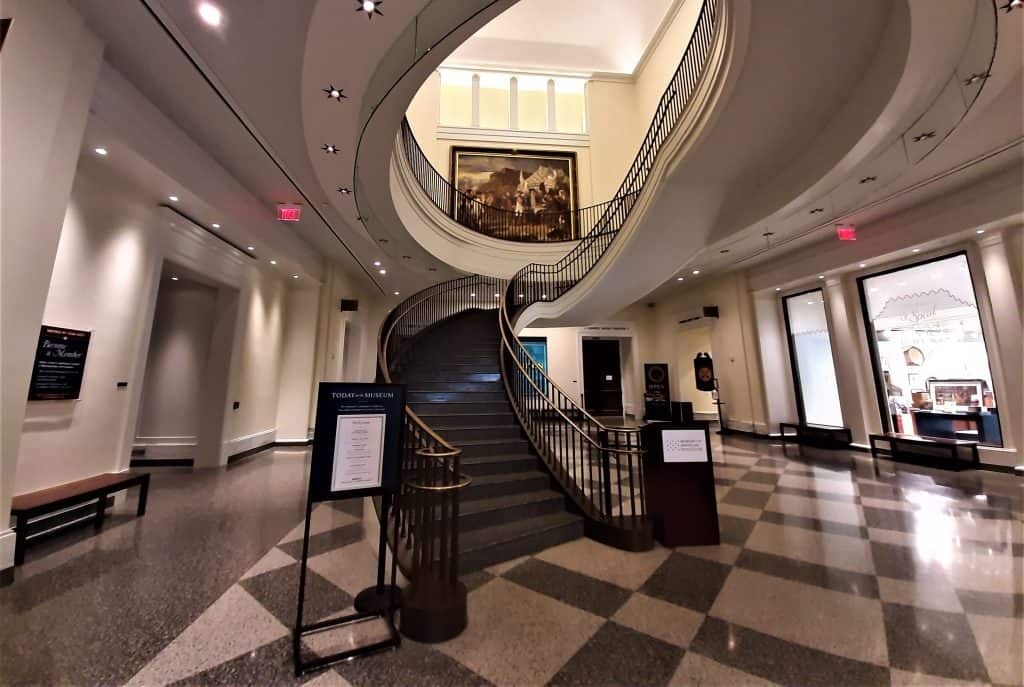 The sweeping winding staircase in the lobby of the Museum of the American Revolution.

The Museum of the American Revolution is a three-story brick building that encompasses 118,000 total square feet.

The plaza in front of the museum is a welcoming place for photographs or just sit and rest. It features a dramatic display of cannons from the Revolutionary era and words from the Declaration of Independence emblazoned in limestone on one of the walls.

When you enter the rotunda through the domed bronze-cladded entrance on Third Street, look out the window to Chestnut Street through the illuminated laylight that represents the six-pointed star from Washington’s Standard flag.

If you walk up the sweeping curved staircase, you can explore the second floor’s 18,000 square feet of galleries and the theater dedicated to George Washington’s War Tent.

The Museum’s lower level includes classrooms for students and groups, collection storage and Revolution Place, a discovery center where children can explore their own role in making history.

On weekends, the museum hosts a special event, “Revolution Place” on its lower level that’s geared especially to children (between the ages of 5 and 12 years old).

The event features several re-enactments from the 1700s, including a home, a military camp, a tavern, and a meeting house.

When To Visit The Museum Of The American Revolution

I visited during the week in September and it was not crowded at all.

Summer months as well as weekends, you can expect it to be more crowded. The Fourth of July holiday is one of the most crowded periods.

How Much Does the Museum Cost?

Admission is $24 for adults; $19 for seniors, college students, and active/retired military; and $13 for children ages 6 and up.

You can save $3 by purchasing your tickets on line at AmRevMuseum.org.

Museum of the American Revolution Parking

Visit the Museum’s website for a listing of parking options nearby.

A few of them include:

How big is the American Revolution Museum In Philadelphia?

The Museum of the American Revolution is three stories tall, contains 118,000 square feet of space, and has more than 400 artifacts on display in four main galleries:

Hours of Operation are daily 10 a.m. to 5 p.m. Closed on major holidays.

Wrap-Up Of The Museum Of The American Revolution

The museum accomplishes what it should: helping us to understand history as it unfolded — not as we think it should be.

Insider’s Guide To Museums In Gettysburg