George Washington’s Tent From The Revolution 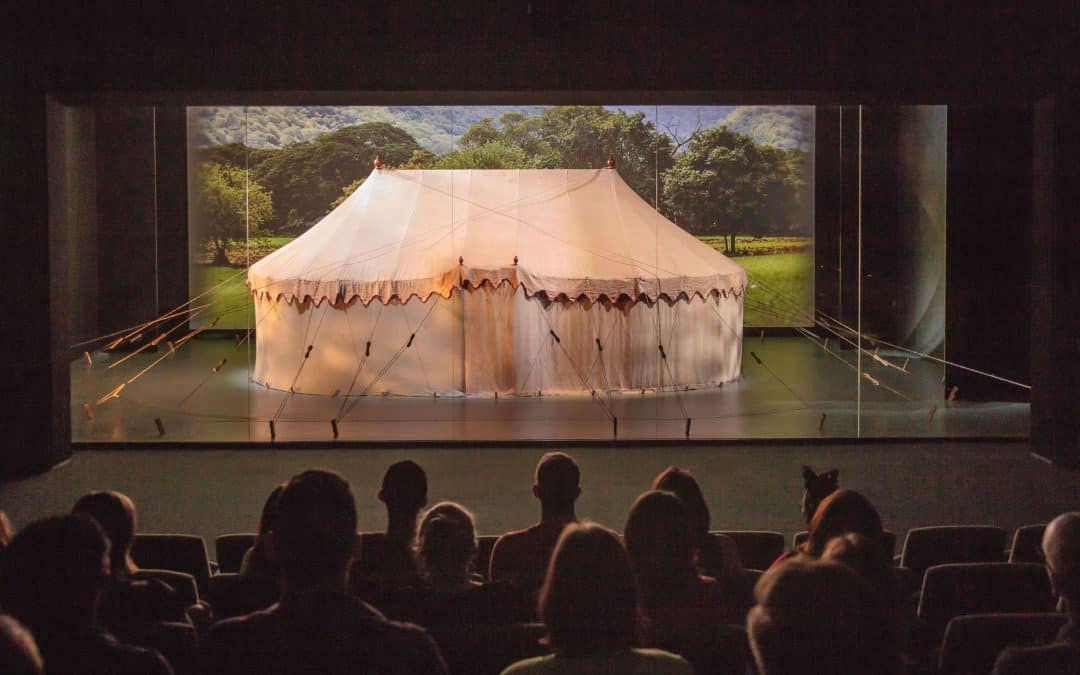 You can’t get much closer to history than seeing George Washington’s tent, a large linen marquis-style covering that he used as a headquarters throughout the American Revolution.

Considered the “First Oval Office” this tent is absolutely one of the most iconic surviving artifacts of the Revolution I have ever seen.

Used as both his office and sleeping quarters, this tent played a major role in Washington’s life and was essential to the war effort. Within its folds, key decisions were made, meetings were held and orders were recorded.

You can see this artifact for yourself at the Museum of the American Revolution in Philadelphia.

Past Lane Travels contains affiliate links. If you make a purchase using one of those links, we may receive compensation at no extra cost to you. We only recommend products and services we use and trust. Read our disclaimer for more information.

The tent was used by Washington from mid-1778 until 1783, including through the Siege of Yorktown which was the last major land battle of the war.

This tent was a “mobile headquarters” for the general and was made in Reading, Pa., during Washington’s encampment at Valley Forge in 1778.

The tent he used prior to that did not survive the test of time.

⬇️⬇️⬇️ Get Your Ticket To The Museum Of The American Revolution! ⬇️⬇️⬇️

The tent is about 23 feet long and 14 feet wide, and has three small chambers: A central office, a half-circle sleeping chamber for Washington, and a small area for luggage and sleeping quarters for William Lee, an enslaved valet who served for Washington throughout the war.

This original tent, used by General Washington as both his military office and sleeping tent, is truly one of the most iconic surviving artifacts to witness America’s fight for Independence.

“Within its venerable folds, Washington was in the habit of seeking privacy and seclusion, where he could commune with himself, and where he wrote the most memorable of his dispatches during the Revolutionary War.”

How Was Washington’s Tent Saved? 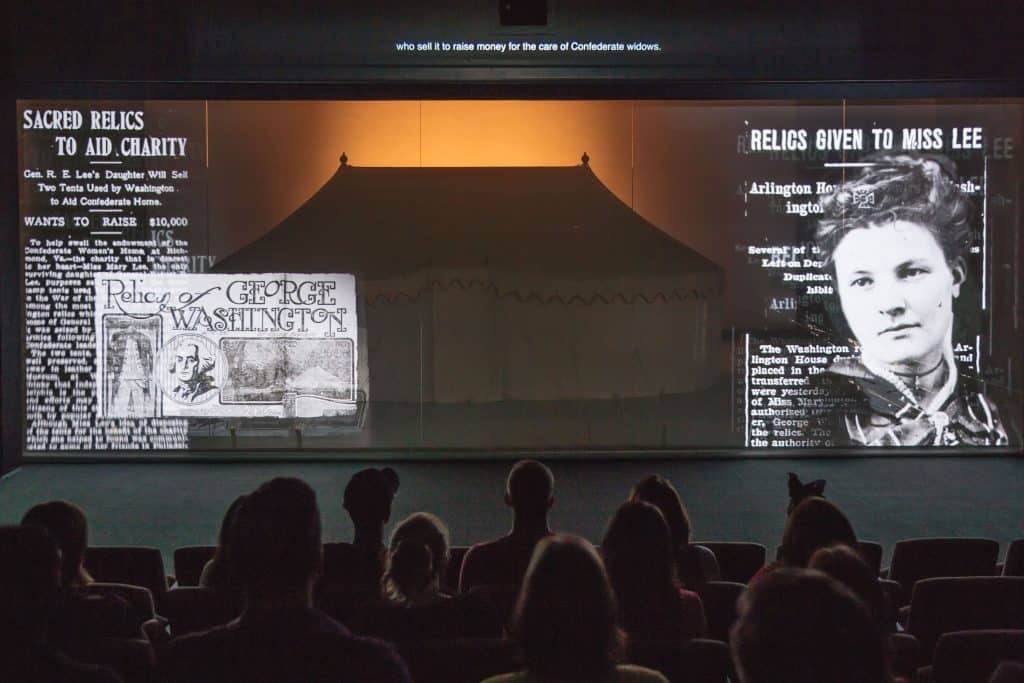 Screen grab from the 12-minute theater production about Washington’s tent.

How the tent survived for more than two centuries has ties to the American Civil War. After the Revolutionary War, the tent fell into the hands of Martha Washington’s grandson George Washington Parke Custis and was therefore stored at his Virginia estate Arlington House. 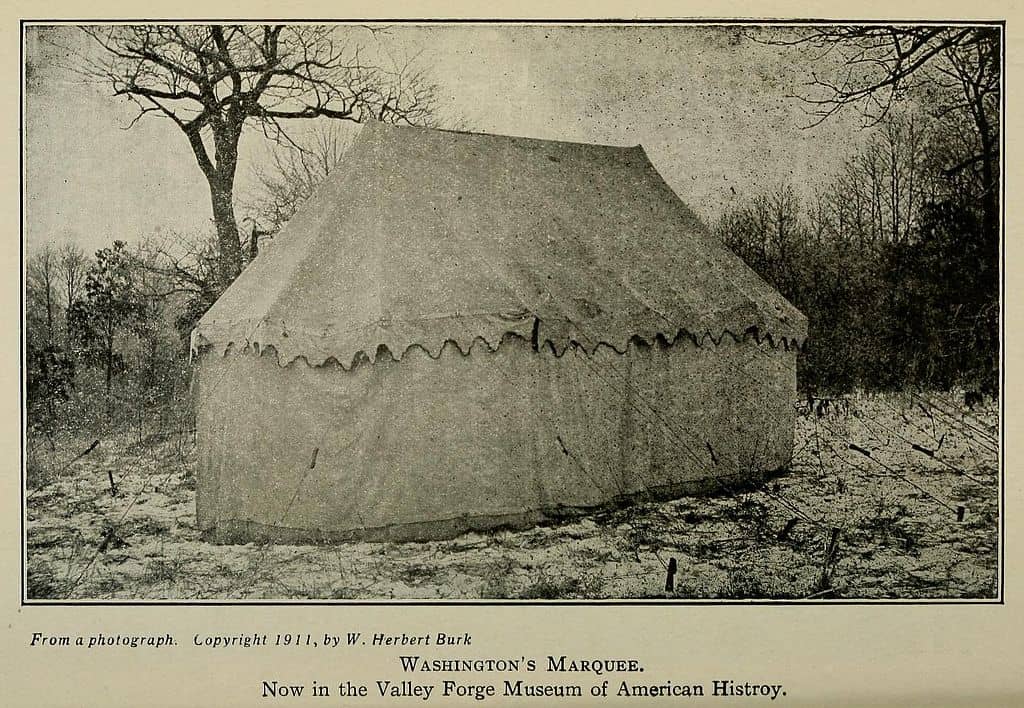 Cutis’ daughter Mary Anna, who was married to Confederate General Robert E. Lee, became the keeper of the tent until it was seized by Federal troops at the start of the Civil War. It remained in federal possession for 40 years until the Lee’s finally won a lawsuit to have it returned.

For a sad story about the plight of the family and the Arlington estate, read Cemetery Reveals Southern Heritage Tale.

The tent was bought in the early 1900’s by an Episcopal minister who collected Revolutionary War memorabilia with the hope of someday opening a museum. His collection then came under the ownership of the Museum of the American Revolution in Philadelphia.

A textile conservator at the museum in Philadelphia spent more than 500 hours conserving the linen tent that is almost 245 years old! All of the small holes that could eventually fray had to be stabilized so the original material wouldn’t be lost over time. That process involved inserting an extremely fine needle and thread between the fibers of the tent’s weaves and using virtually invisible netting to stabilize the holes. The conservation effort also entailed using digital inkjet printing to reproduce new fabric that matched the original material. The new fabric swatches were then used to repair holes, rips and a large piece that had been cut away.

The Structural Support of Washington’s Tent

The Museum of the Revolution wanted to display the tent to the public, but at the same time, didn’t want to put too much tension on the delicate fabric. A structural engineering firm, along with a team of conservators, historians and craftspeople, worked together to design an umbrella-like aluminum structure to display this important historical artifact.

A canvas sub-tent membrane stretched over the structure supports the tent. Invisible to viewers, the umbrella structure allows the tent to imitate its original shape. The ropes that originally tensioned the tent are now purely aesthetic.

Washington’s War Tent is presented as part of a 12-minute multi-media presentation in a 100-seat theater.

The tent seems close enough to touch, but is actually behind glass in a 300-square-foot climate-controlled object case.

A surround-sound track, theatrical lighting and a video presentation truly leads up to a dramatic reveal. (It really is dramatic! Amazing to see history appear right before your eyes).

Seeing Washington’s Tent For Yourself

The theater presentation about Washington’s tent is free with your ticket to the Museum of the American Revolution.

The Museum is located 101 South Third Street in Philadelphia (the corner of Third and Chestnut streets).

Insider’s Guide To Museums In Gettysburg

Gettysburg WWII Museum Is An ‘Experience’