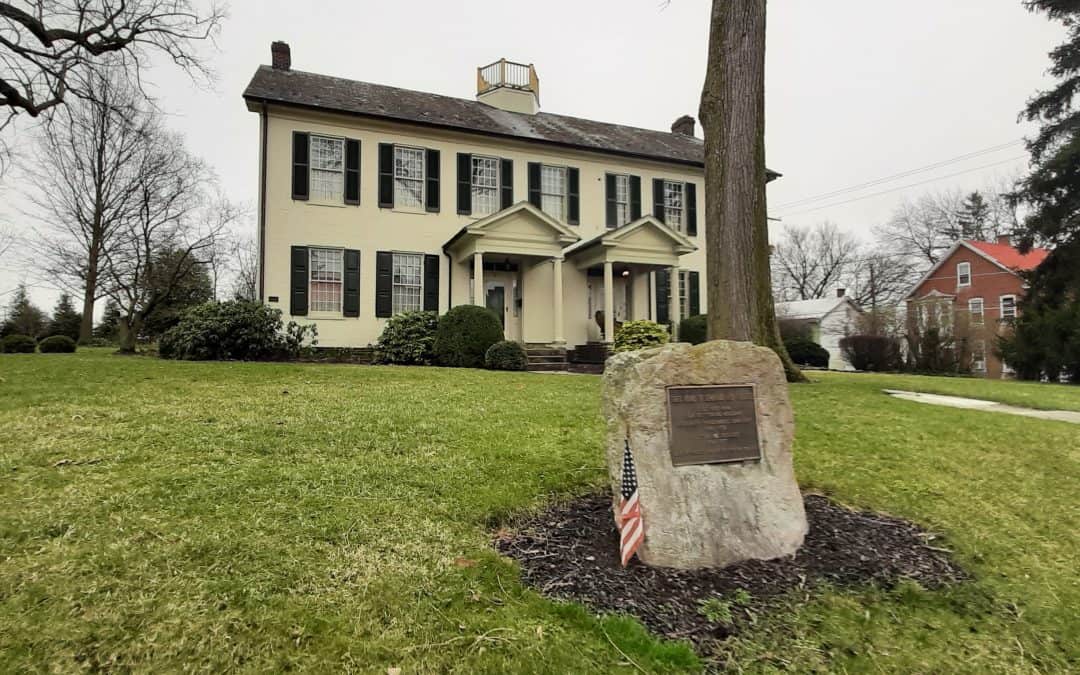 The newest Bed and Breakfast in Gettysburg is one of the oldest and most historic buildings in a town known for its rich history. Built in 1813 as an educational facility, the impressive brick structure has stood at the corner of High and Washington streets for more than 200 years.

The Gettysburg Academy Bed and Breakfast building was also used as a Civil War hospital after the Battle of Gettysburg. From students studying to soldiers dying, the walls of this remarkable building have witnessed more than two centuries of history.

Even though the building is starting a new chapter as a Bed and Breakfast in Gettysburg and special event venue, its past is still evident. A student’s signature remains imprinted on an upstairs wall and an artillery shell is still lodged in its bricks.

With such a long and storied past, it wouldn’t be surprising if this Bed and Breakfast in Gettysburg is haunted…

And some visitors claim that it is.

Bed And Breakfast In Gettysburg Has A History Of Education

In addition to starting out as a boarding school called the Gettysburg Academy, this building was also the first home of the Lutheran Theological Seminary at Gettysburg and Gettysburg College (originally known as Pennsylvania College).

This distinguished history in education has caused the building to be called the “cradle” of higher learning in Adams County and for the Lutheran Church.

The Gettysburg Academy’s history began on March 19, 1810, when the Legislature of Pennsylvania appropriated the sum of $2,000 to aid in establishing a school.

This was a common practice after the American Revolution as a way to educate local youth. When the classical school operated by Alexander Dobbin (now the Dobbin House restaurant) closed in 1799, it left a void in the community. A handful of prominent Adams County leaders pursued a state charter for a new academy.

Using the state grant, the school was constructed from 1813-1814 at the southeast corner of West High and Washington streets in Gettysburg.

The legislation mandated that part of the funds be used to provide free education to indigent children—a common practice. In fact, the State Legislature chartered about 150 academies between 1784 and 1861. Each institution received $2,000 if it promised to enroll four or five poor children without charge.

The Gettysburg Academy’s doors opened for the school year 1814-1815, and continued its operations until approximately 1825.

Since its founding, the large brick building has been the home of various educational institutions. After the Gettysburg Academy, the Lutheran Theological Seminary used the building from 1826 until 1832.

The Lutheran Theological Seminary began classes at the Academy building on September 6, 1826, calling it the Gettysburg Gymnasium. At that time there were eight students, along with Professor Samuel Simon Schmucker, who purchased the building in 1829 for $1,150.

In 1832 the Gymnasium became Pennsylvania College, now Gettysburg College. The College remained in this building until 1837 when it moved into Pennsylvania Hall on its new campus.

From 1837 to 1856 this structure was used as a school by various teachers.

In 1856 the Rev. David Eyster purchased the property. With the assistance of his wife, Rebecca, they established a Young Ladies Seminary, known as the Gettysburg Female Institute. Mrs. Eyster was described as “a lady of culture and administrative ability.”

The Gettysburg Female Institute was in operation for fifteen years serving young ladies in the Gettysburg area. After Mr. Eyster’s death, while still under the direction of Mrs. Eyster, the Institute “attained great popularity and usefulness.”

Eyster’s “School Halls” were advertised for rent in 1877 and the structure became a private residence in the 1880s. It was also used as World War I officers’ quarters and as a tourist home hotel from the 1930s to the 1950s.

The Anti-Slavery Society held meetings in the building in the 1830s.

The Civil War Comes To Gettysburg

The story of the Academy’s role in the Battle of Gettysburg in July of 1863 is a fascinating one that we get to see through the eyes of  15-year-old Matilda J. “Tillie” Pierce.

Born in 1848 in Gettysburg, Tillie was a student at the Young Ladies Seminary and recorded her memories many years after the war in a book called “At Gettysburg, Or What A Girl Saw And Heard Of The Battle.”

Tillie said of the school:

“With pleasant recollections I bring to mind the Young Ladies Seminary on the corner of High and Washington Streets. Here I received instruction; Here in the bright and happy flush of young womanhood, I was graduated and given my diploma.”

On June 26, 1863, the students of Rebecca Eyster’s Young Ladies Seminary were studying in this “old Academy Building.” Tillie went on to describe the arrival of the Confederate troops from Seminary Ridge:

“Rushing to the door, and standing on the front portico, we beheld in the direction of the Theological Seminary, a dark, dense mass, moving towards town.” 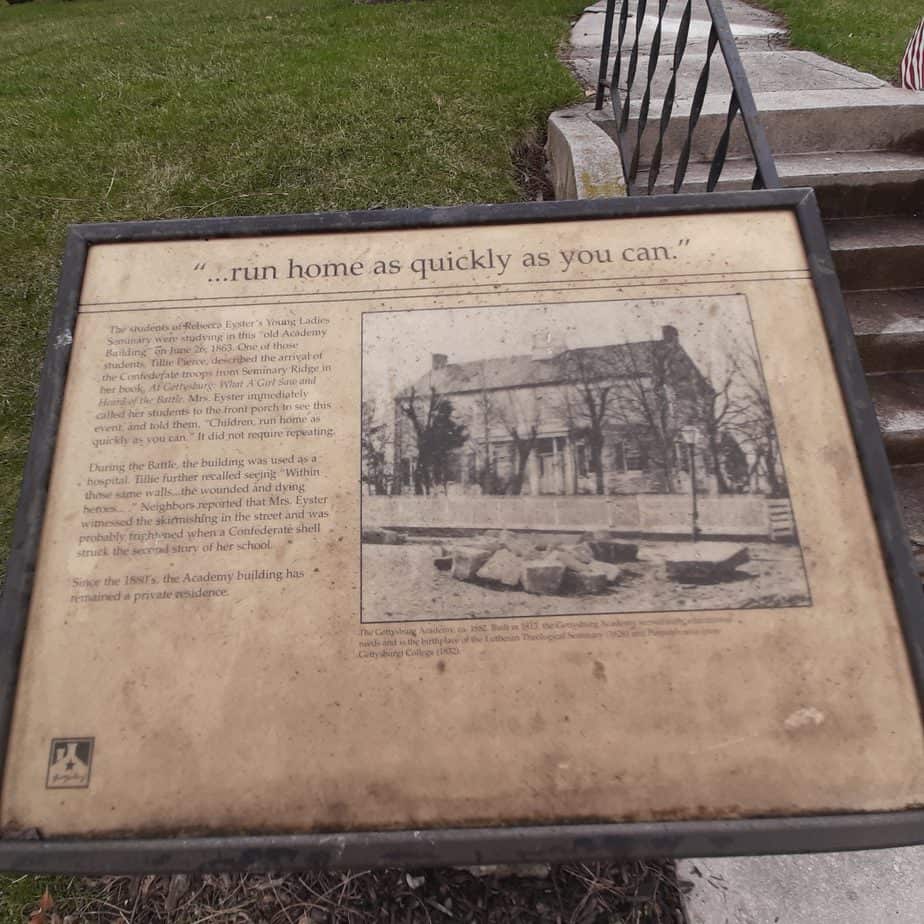 The Battle of Gettysburg Rages Near

The Battle of Gettysburg brought Tillie and her fellow students closer to the war than they expected when cavalry troops from the Union army passed right by the school building.

“A little before noon on Tuesday, June 30, a great number of Union cavalry began to arrive in town. They passed northwardly along Washington Street, turned toward the west on reaching Chambersburg Street, and passed out in the direction of the Theological Seminary.

It was to me a novel and grand sight. I had never seen so many soldiers at one time. They were Union soldiers and that was enough for me, for I then knew we had protection, and I felt they were our dearest friends. I afterwards learned that these men were Buford’s cavalry, numbering about six thousand men.”

She continues, “A crowd of ‘us girls’ were standing on the corner of Washington and High Streets as these soldiers passed by. Desiring to encourage them, who, as we were told, would before long be in battle, my sister started to sing the old war song ‘Our Union Forever.’

Thus we sought to cheer our brave men; and we felt amply repaid when we saw that our efforts were appreciated. Their countenances brightened and we received their thanks and cheers.”

At the urging of her family, Tillie and some friends left the town and went to what they thought would be a safe house. Unfortunately, Jacob Weikert’s farm was located at the base of Little Round Top, right where some of the heaviest fighting of the battle took place.

During the battle, Tillie assisted the surgeons and nurses caring for the wounded. On July 7, 1863, she returned to her home, located at the intersection of Breckenridge and Baltimore streets. This house is also a Gettysburg Bed and Breakfast rumored to be haunted. Tillie said upon her return: “The whole landscape had been changed and I felt as though we were in a strange and blighted land.”

Like many buildings in the town, the Academy was used as a hospital to treat soldiers from the Gettysburg battlefield. Tillie’s description of the building continued, “Within those same walls had been placed some of the wounded and dying heroes of the struggle; and as we passed from room to room we would speak in subdued tones of the solemn scenes which imagination and report placed before our minds as having transpired when the conflict was over.”

The Gettysburg Academy went through a restoration in the 1990s to return the building to a single family home. Many architectural features such as sealed fireplaces and doorways were revealed during that process.

Additionally, when the owners removed the old wallpaper, they discovered ivy stenciling and some students’ signatures scratched into the plaster. They decided to keep these treasures of the past uncovered for guests to get a glimpse at the history of the building.

The most legible name etched into the wall is “O O M Clean 1830.” Gettysburg College archives reveal that Oliver Ormsby McClean was a student at the Academy in 1830.

Other historical discoveries include a porch column that was used as part of a wall when the building was split into two homes in the 1930s. In May of 2013, the owners discovered a brass key next to the foundation of the kitchen addition.

In December of 1994, the cupola that had been removed in 1932 was replaced. The owners (David and Jane English at that time) carefully replicated the original version which is accessible by a spiral staircase.

You can still see the effects of the Battle of Gettysburg on the outside of this stately Gettysburg B&B as well.

An artillery shell is lodged in the brick on the Gettysburg B&B’s second story as a reminder of the historic battle. It is about three inches in diameter and was most likely fired from Oak Ridge during the first day of fighting. It has been identified as a Read shell, probably from a 10-pounder Parrott rifle within the Confederate lines. 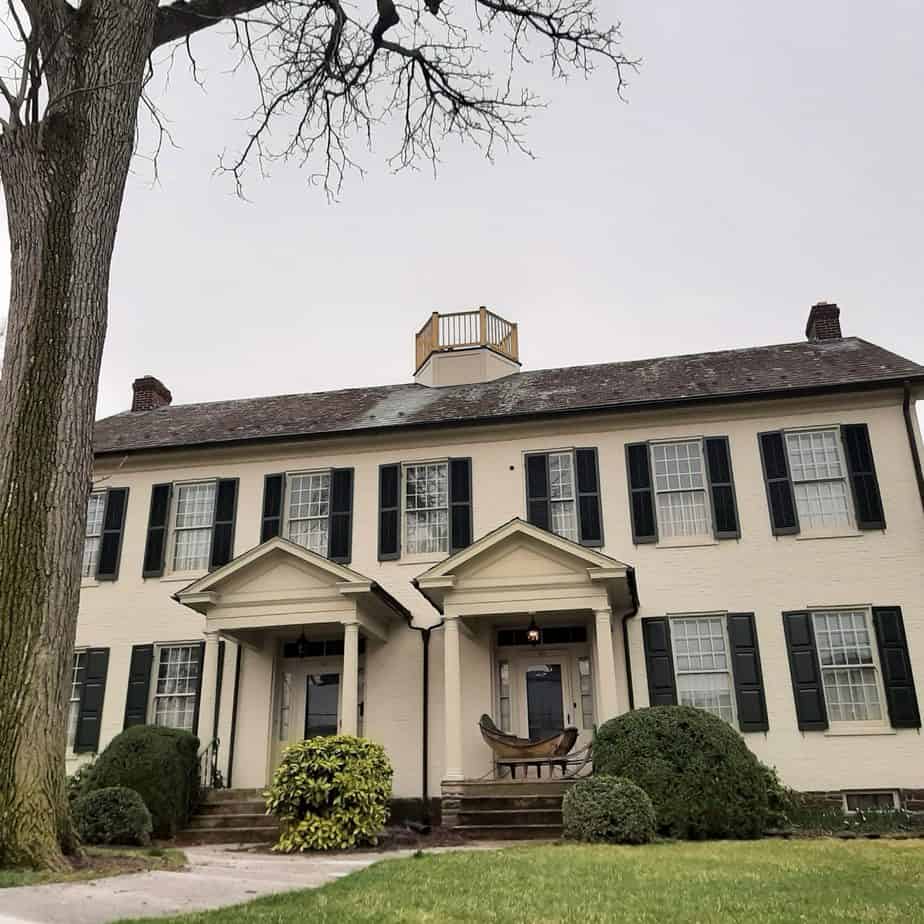 You can see the artillery shell from the Battle of Gettysburg lodged in the brick above the peak of the entrance on the right. This is one of the many historical treasures from the past at The Gettysburg Academy, Gettysburg’s newest Bed and Breakfast.

This shell is one of nine artillery shells that can still be found embedded in historic Gettysburg buildings.

The Academy Bed and Breakfast is owned by a family with deep roots in Gettysburg and a close association with the building. The Gettysburg Academy building has been owned by the same family for the past 90 years. 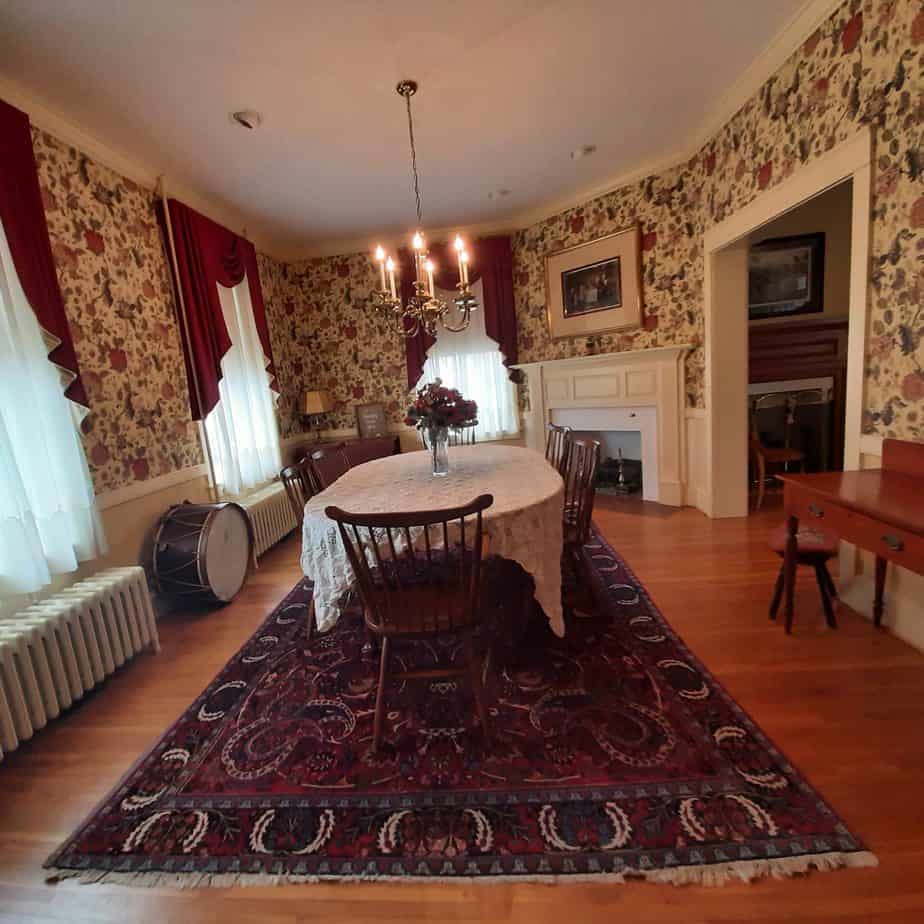 The house features an open modern kitchen and large living room with a television. An elegant dining room and magnificent great room are part of the house rental and available for event gatherings.

One of the furnishings in the great room is a tall case clock that has been in the family since 1795. Made from cherry wood that came from the family farm in Greenmount, the heirloom piece was made by craftsman Jacob Hostetter from Hanover. 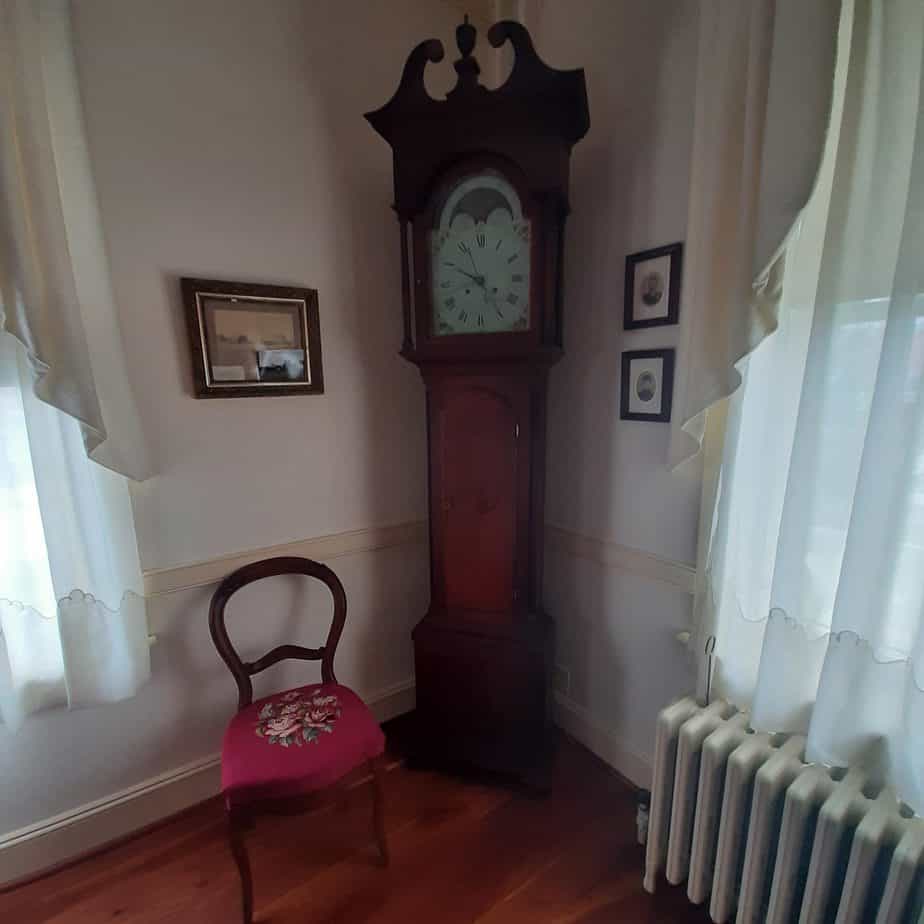 Upstairs there are five tastefully-decorated bedrooms (1 king and four queens), all with brand-new mattresses, and three full bathrooms. The high 10-foot ceilings make the rooms feel large and airy, unlike many other guest rooms in historical homes.

Each bedroom also includes a ceiling fan. Two other unique features in the house include a landing upstairs as well as an upstairs porch on the back of the house.

Modern amenities include heat and central air conditioning, free wifi, and five off-street parking spaces, including use of a garage. Additional parking is available for special events.

The new Gettysburg Bed and Breakfast is conveniently located two blocks from Lincoln Square and downtown Gettysburg. You can park your car and walk to restaurants, museums and unique boutique shops.

It’s also close to the tourist district on Steinwehr Avenue and the Gettysburg National Military Park.

Is This Bed And Breakfast In Gettysburg Haunted?

With all of the history that took place in within the walls of the Gettysburg Academy Bed and Breakfast, one would not be surprised if spirits still roam its halls. After all, Gettysburg is known to ghost-hunters and historians as one of the most haunted locations in the United States.

Though there are no specific stories of ghosts or hauntings, some people get a “strange feeling” in the house.

On your next trip to Gettysburg, check out this historic Bed and Breakfast inn that is close to the downtown and surrounded by history and the battlefield.

The Gettysburg Academy Bed and Breakfast is located in Gettysburg, Pa. at 66 West High Street.

15 FREE Things To Do In Gettysburg

The Reliance Mine Saloon

Past Lane Travels contains affiliate links and is a member of the Amazon LLC Associates Program. If you make a purchase using one of these Amazon links, we may receive compensation at no extra cost to you. Read our disclaimer for more information.

Most Haunted Places In Gettysburg