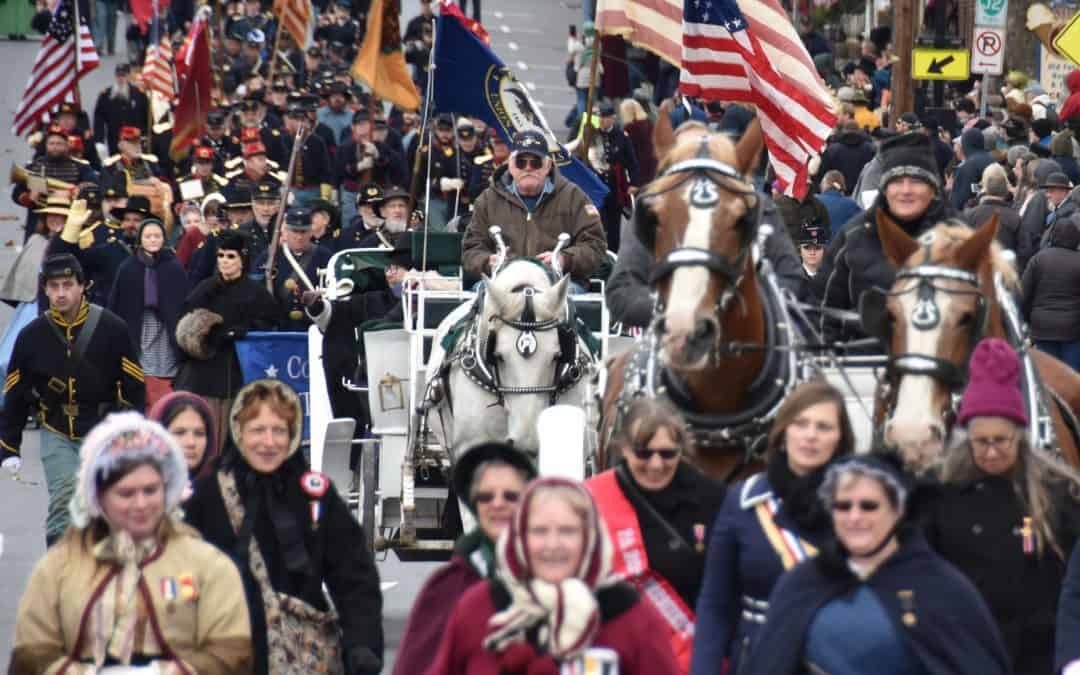 Looking for free things to do in Gettysburg? We all know that going on vacation can be expensive. Gas and hotels alone add up — and that’s not counting museums, souvenirs or the food tab.

But, if you’re looking to save some money on your trip to Gettysburg, you’re in luck.  You can explore the battlefield that surrounds Gettysburg itself for free (though there are plenty of options for paid tours, from double-decker buses to horseback). And there are also lots of activities that everyone in the family can enjoy that don’t cost a cent. This post lists some of my favorites.

Can you visit Gettysburg for free?

Absolutely. Gettysburg, Pa., is a small crossroads town where two armies met and fought for three days in July 1863 (July 1, 2 and 3). Not only does the town itself provide plenty of window shopping opportunities and hidden history, but the battlefield that surrounds the town can be explored by car, foot or bicycle for free.

Free Things to Do In Gettysburg

1. Watch the sunset from Little Roundtop.

This is one of my favorite ways to end the day and it doesn’t cost a penny. The view from the rocks on Little Round Top are spectacular any time of day, but especially when the sun is setting. Mother Nature provides this wonderful spectacle for free every day — weather permitting.

Bring a blanket, sit on a rock and enjoy the show. 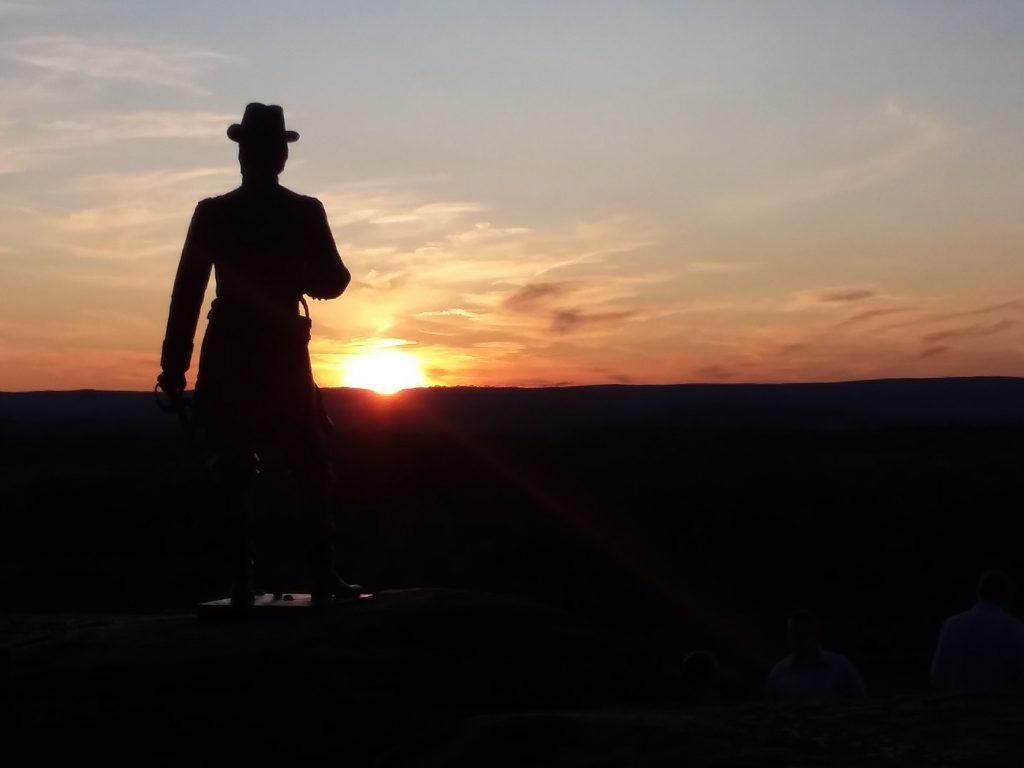 Little Round Top at sunset.

2. Climb the Castle Monument at Little Round Top.

Get to Little Round Top early so you have time climb the “castle” before dark. This monument, dedicated on July 3, 1893 at a cost of almost $11,000 is the largest & most expensive regimental monument on the field.

It is also a favorite for visitors — especially the kids. 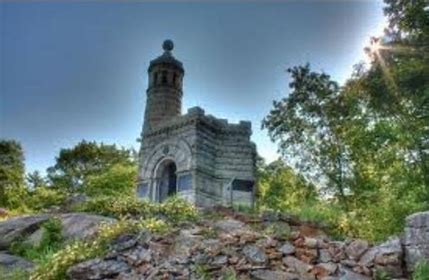 The “castle” at Little Round Top.

Climb an Observation Tower and check out the view of the beautiful rural countryside while getting a bird’s eye view of the battlefield .

There are three to choose from. Longstreet’s Tour on Confederate Avenue is a seven story metal tower with a roof. Culp’s Hill Tower is about six stories and also has a roof.

If climbing is hard for you, your best bet is the Oak Ridge Observation Tower off the Mummasburg Road near the Peace Light Memorial. It is only half a tower and features an open top, overlooking the area north of town (first day’s fighting).

Pro Tip: The smaller tower has open views to the east and west, providing great sunrise and sunset shots.

This picture was taken from the Pennsylvania Monument, but the towers offer the best overview of the battlefield.

The big draw to Sachs Bridge isn’t because it is one of only two covered bridges remaining in Adams County, but because it’s reportedly haunted. First built in 1854, the bridge spans Marsh Creek and is approximately 100 feet long.

According to legend, three Confederate soldiers convicted of being spies were hanged from beams in the covered bridge, and their bodies were discovered by Union soldiers patrolling the area. People also report smelling pipe smoke of soldiers who are still patrolling.

The bridge is located off Pumping Station Road, just south of Gettysburg. It can get very busy at night with ghost hunters, especially around Halloween.

Pro Tip: If you don’t want to try to find the bridge at night, go during the day. It’s a great spot for picture-taking and picnicking. 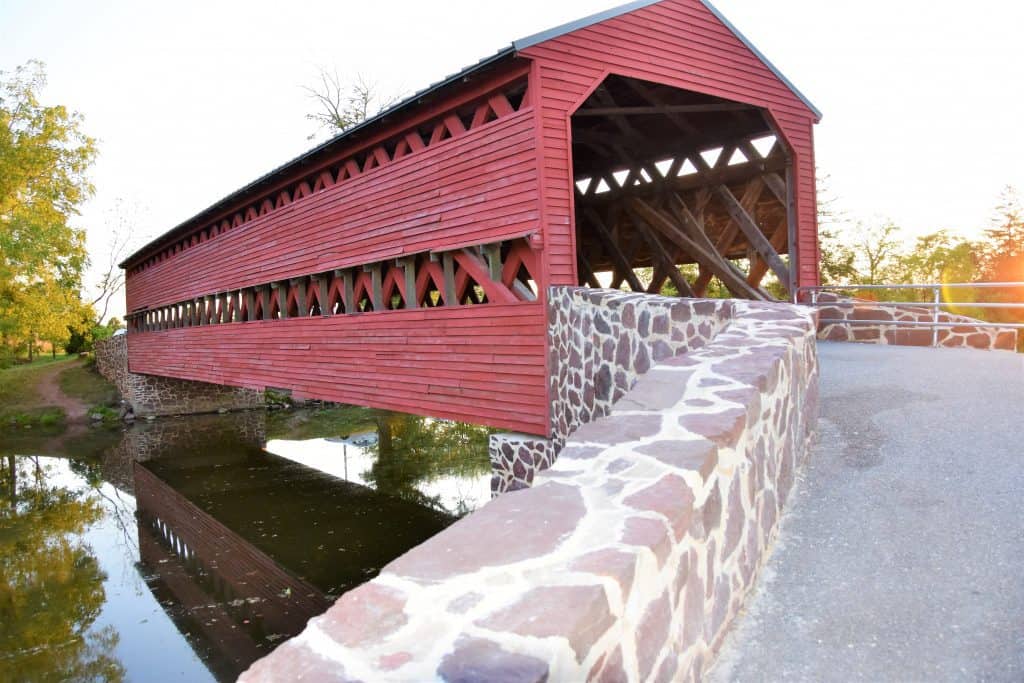 The covered bridge outside Gettysburg is a great place to go ghost hunting or just enjoy the sights.

5. Explore the rocks at Devil’s Den.

No visit to the Gettysburg Battlefield is complete without stopping at Devil’s Den. In addition to its strategic importance during the battle, this historic site is a great place to let older kids burn off some energy.

The site includes numerous cannon, memorials, wayside markers, and walkways, including a bridge spanning two boulders. Many people get their picture taken at the exact spot where a dead Civil War soldier had once lain. A wayside marker at the site depicts the scene. 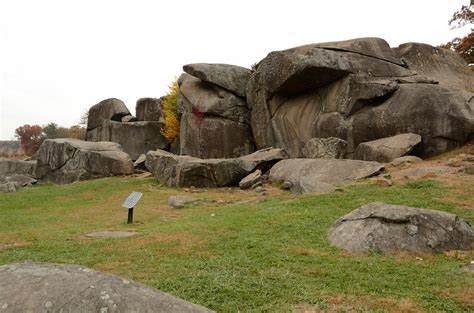 6. Hike the trail at Big Round Top.

Big Round Top is a boulder-strewn hill notable as the high point during the Battle of Gettysburg that is about a .8 mile climb. Not only will you pass battle monuments that explain the action that occurred there, it is a great place for birdwatching. Wear good shoes and bring some water.
Extra: Three dinosaur footprints sit atop the rock bridge which carries South Confederate Avenue over Plum Run, located at the foot of Big Round Top. Park at the William Wells statue and walk to the bridge. 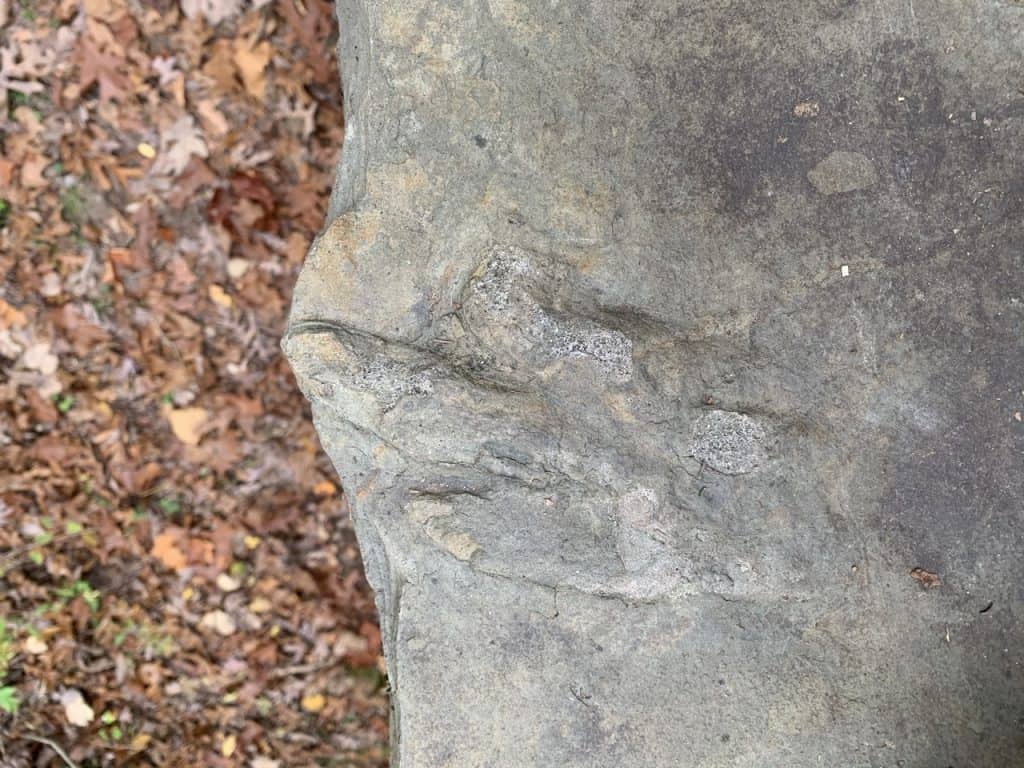 Dinosaur footprint left in the rock on the bridge over Plum Run at the base of Big Round Top.

The memorial was dedicated by President Franklin Roosevelt on July 3rd, 1938, the 75th anniversary of the battle. One Union and one Confederate veteran unveiled the 47 1/2 foot tall shaft.

The views from the Memorial, which stands on Oak Ridge northwest of town, are another free Gettysburg bonus. 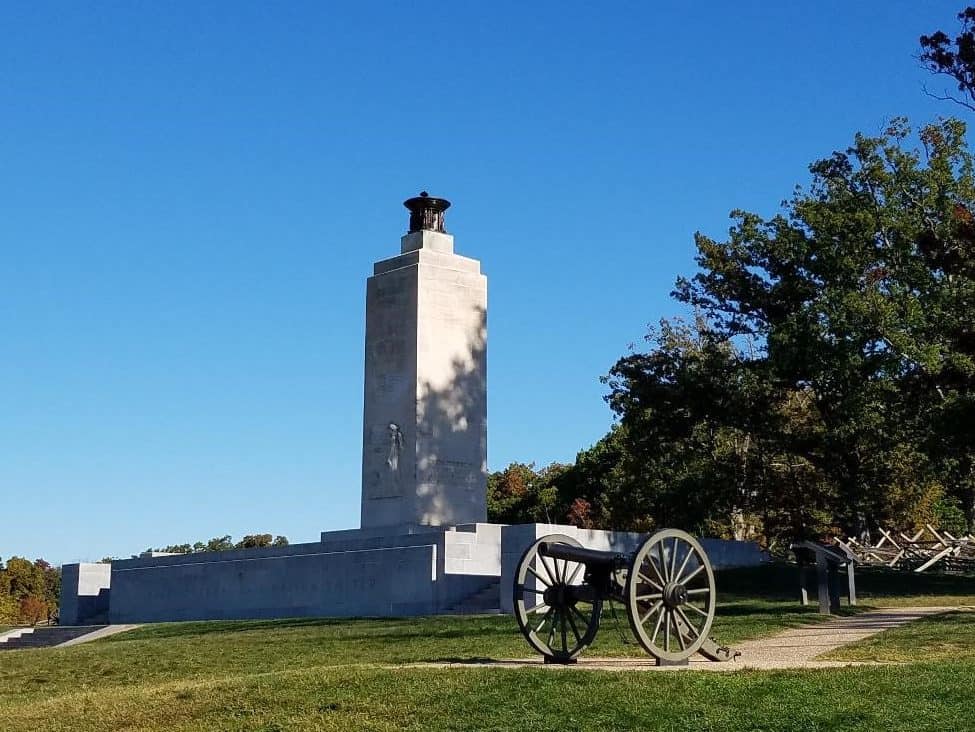 One of the least visited memorials in Gettysburg is the mural at at Kuhns Brickyard. Dedicated on the 125th Anniversary of the Battle of Gettysburg, it depicts the clash between Colonel Charles Coster’s Union forces and the Confederate brigade led by General Harry Hays.

Located in a residential area at East Steven’s Street and Hazel Alley in Gettysburg. Parking is limited. 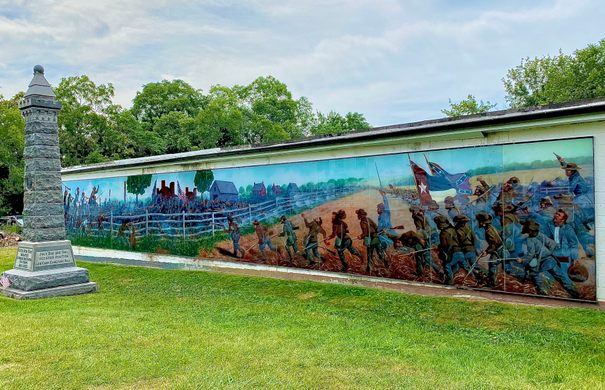 One of the least visited places on the battlefield — the Coster Mural.

9. Spot the cannonballs and artillery shells in buildings.

Although many people drive and walk by them without taking notice, there are plenty of reminders of the raging battle that took place in the town of Gettysburg still visible in the walls of buildings.

One of the most notable is a cannon ball that can be seen protruding from the building on York street between the first and second story. There is a small flag marking the spot. Another is in a building located at 304 Baltimore Street. 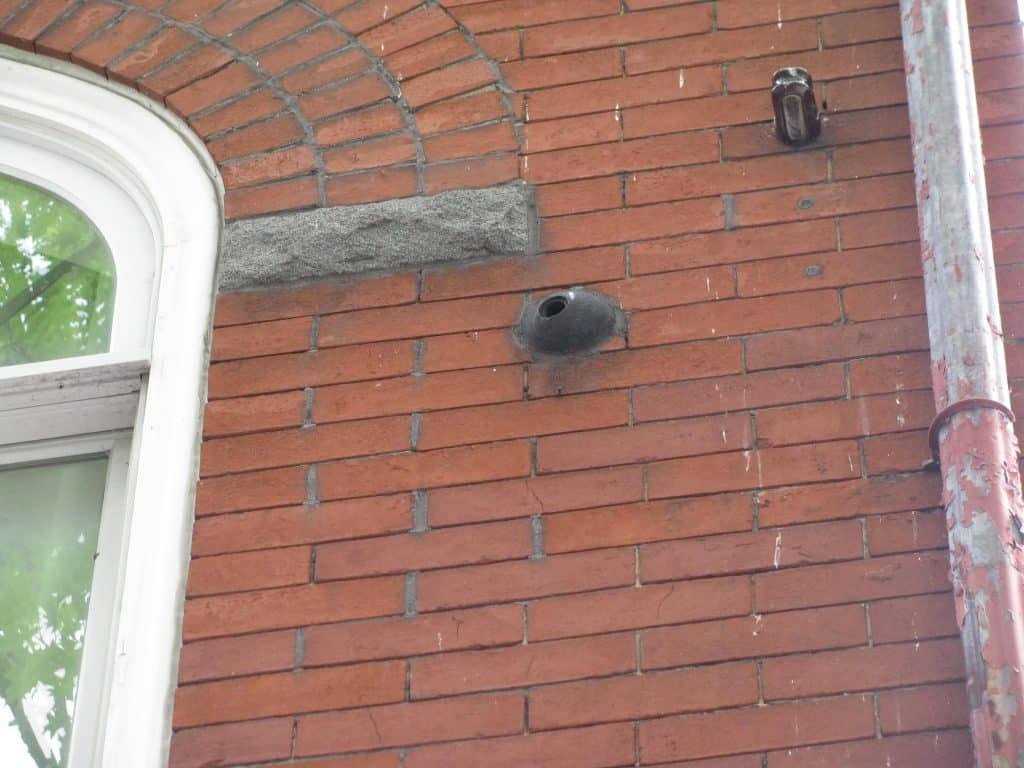 Cannon ball, still lodged in a building located at 314 Baltimore Street in Gettysburg.

The Gettysburg Train station played a big role in Gettysburg history — most notably as the place where President Abraham Lincoln arrived to give his famous Gettysburg Address in 1863.

Additionally, the station served as both a hospital during the battle and a gathering point for outgoing wounded soldiers. It also served as the place where thousands of concerned relatives arrived by train to look for loved ones.

Pro Tip: Located on Carlisle Street one block from Lincoln Square, the train station is now a Visitor’s Center that can answer any questions you may have. 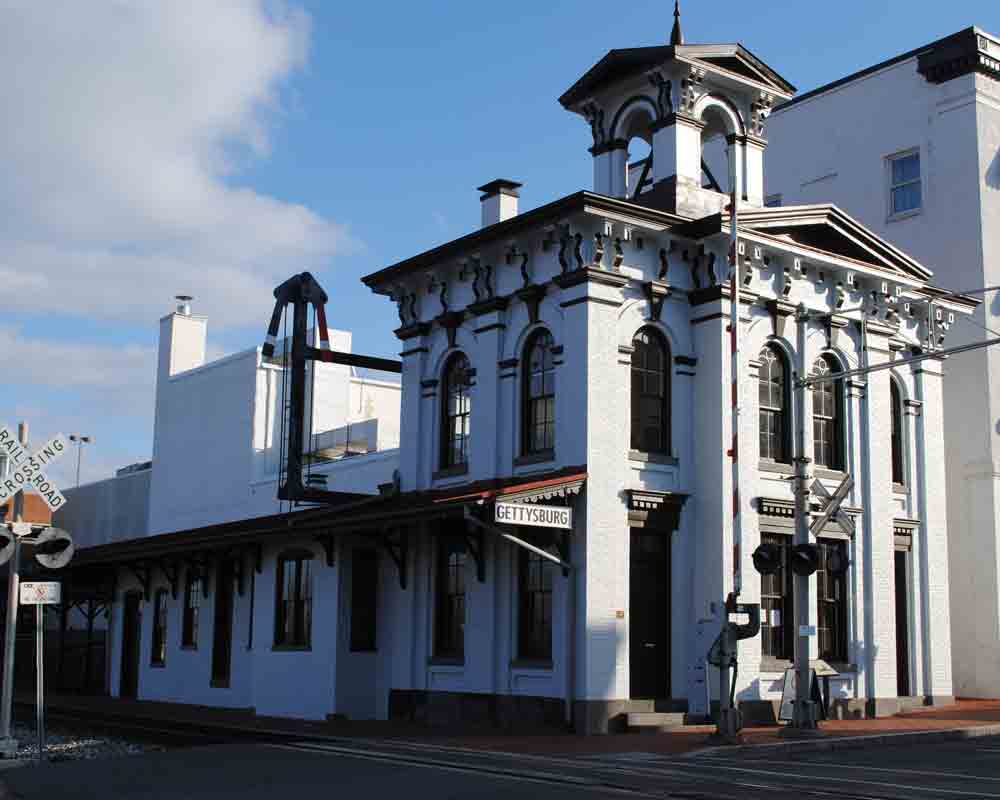 The train station in Gettysburg, where Lincoln arrived to give the Gettysburg Address.

11. Get your picture taken with President Lincoln

There are plenty of opportunities to get your picture taken with President Abraham Lincoln in Gettysburg! The most notable is the statue on Lincoln Square, but there are others scattered about as well.

Just a short distance from the square on Baltimore Street is a statue (in front of the Adams County Library), and in the other direction is a statue on the campus of Gettysburg College (Carlisle St.)

Finally, there is a bronze statue located at the Gettysburg National Park Visitor Center. 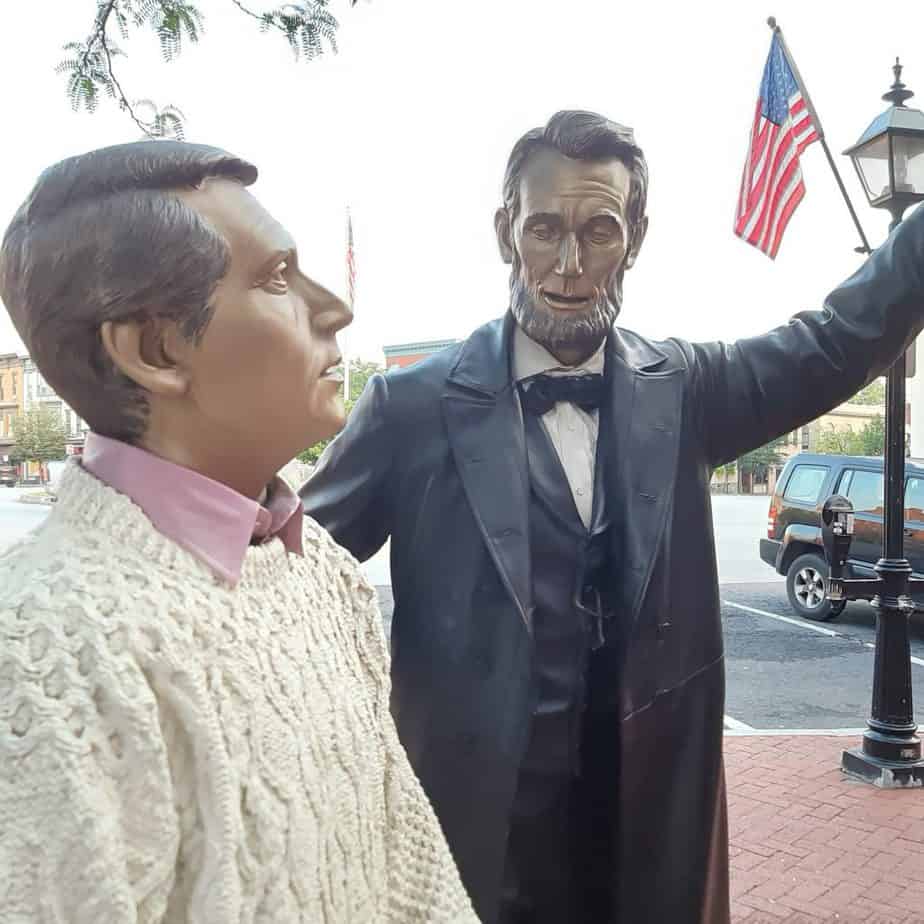 The Lincoln Statue on Lincoln Square in Gettysburg is a favorite with visitors.

You may not think that visiting a cemetery is very fun thing to do, but the Soldiers National Cemetery is a beautiful landmark where 3,500 Union Civil War soldiers, as well as WWII veterans, are buried. It is also the site of Lincoln’s Gettysburg address, and has “witness trees” that witnessed the Battle of Gettysburg.

Evergreen Cemetery, which is located right beside the Soldiers National Cemetery is a historic cemetery as well. Among the notable people buried there are Jennie Wade, the only civilian killed during the battle, and John Burns, who was a veteran of the War of 1812, and helped fight the Confederates during the Battle of Gettysburg. 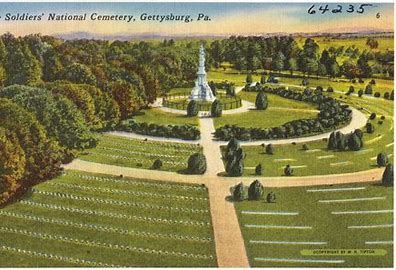 The State of Pennsylvania Monument is the largest monument on the Gettysburg battlefield, with the tip of the sword of the statue of Winged Victory standing at 110 feet high. A spiral staircase takes visitors to the roof of the monument, which offers a panoramic view of the battlefield.
One of the most interesting facts about this monument is the Winged Victory statue on the top, which weighs 7,500 pounds and which was created from melted down Civil War cannons. 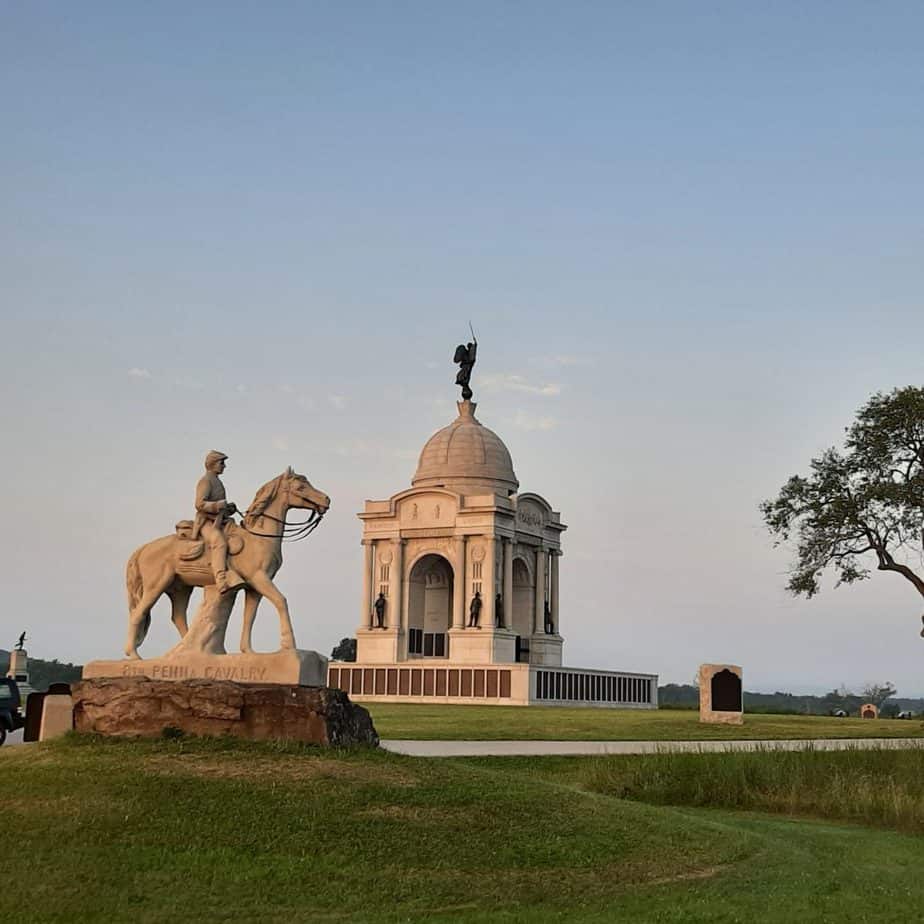 14. Find your state’s monument on the battlefield.

There are 1,328 monuments, memorials, markers, and plaques on the battlefield that commemorate and memorialize the men who fought and died during the Battle of Gettysburg.

You can drive around the battlefield for hours looking at monuments, which makes it one of the best free things to do in Gettysburg! 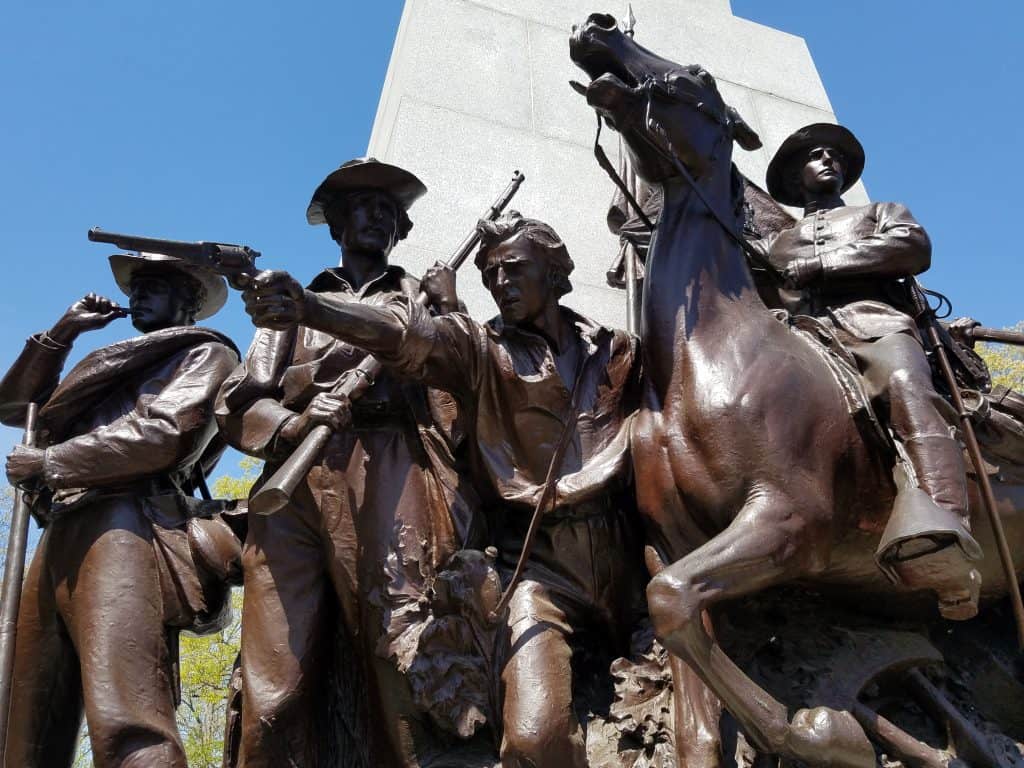 Every monument on the Gettysburg Battlefield  is a spectacular work of art, but perhaps one of the most famous is the Virginia Monument on Confederate Avenue.

15. Get your picture taken with a cannon.

There is no shortage of photo opportunities on the Gettysburg Battlefield and cannons are plentiful. If you a selfie with a cannon, I recommend stopping at the Peace Light Memorial which also offers beautiful views, or a drive down Confederate Avenue, the scene of Pickett’s Charge.

Cannons — as well as many statues — line Confederate Avenue. Keep your eyes out for the Virginia Monument, the tallest monument on the Avenue that features General Robert E. Lee on a horse at the top. 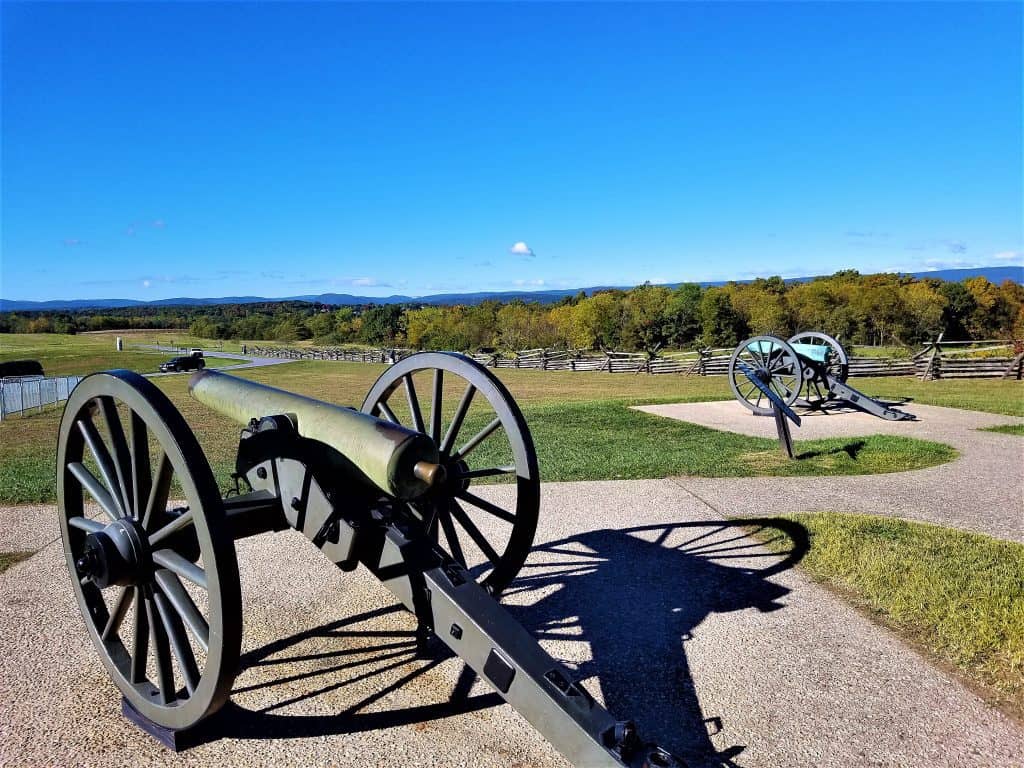 Are the Museums in Gettysburg free?

Most of the museums in Gettysburg are not free, however the Gettysburg Museum of History, located at 219 Baltimore Street is a free museum in Gettysburg. It contains one of the most extensive private collections of artifacts from the American Civil War, World War I, World War II, Presidencies and Pop Culture.

Free Things To Do In Gettysburg In November

If you happen to be visiting Gettysburg in November on the weekend closest to November 19, you can attend the one-of-a-kind Remembrance Day Parade for free.

Hundreds of uniformed reenactors and period-dressed civilians as well as dozens of cavalry horses participate in the annual parade that honors President Lincoln’s Gettysburg Address. His speech took place at the dedication ceremony of the Gettysburg National Cemetery on November 19, 1863.

The weekend is full of special activities for the whole family. The weather can be very cold so dress appropriately for this free thing to do in Gettysburg.

What Are Free Things to do in Gettysburg in the Evening?

Looking for things to do in the evening? How about a stroll down Steinwher Avenue for some window shopping? If it’s a hot summer day, don’t forget to stop by Mr. G’s on Baltimore Street for an ice cream cone. You can have a seat on a bench in Alumni Park right across the street and do some people watching.

Where to Stay in Gettysburg.

There is no shortage of places of stay in Gettysburg, from rustic cottages, to historic hotels and B&B’s that were once used as field hospitals.

Check out Destination Gettysburg for a complete list of places to stay.

Wrap-Up: Free Things To Do In Gettysburg

A visit to Gettysburg doesn’t have to be expensive. As you can see from this list, there is a lot to see and do — and certainly plenty of history no matter what your interest.

For a more complete list of Free Things To Do In Gettysburg, you can pick up a copy of the Gettysburg Handbook and Travel Guide.

Pro Tip: The most crowded time of the year is around the anniversary of the Battle (July 1, 2 and 3), but it’s important to note that there are also a lot of extra events during that period as well — and many of them are free.