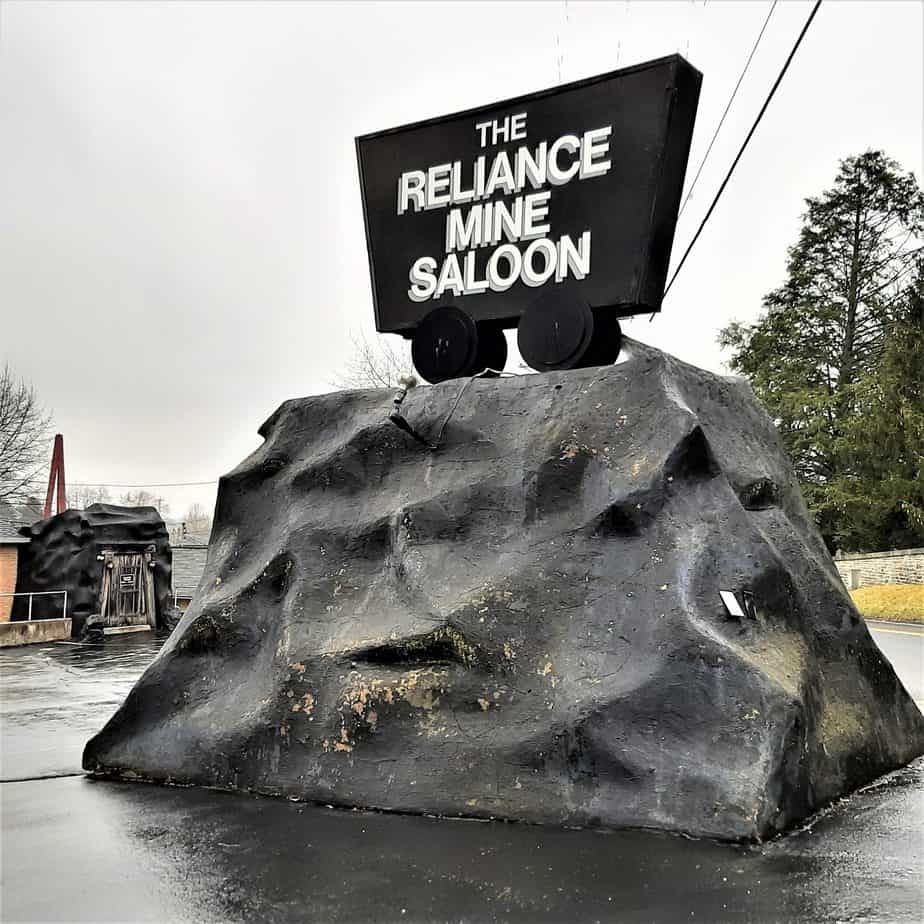 Reliance Mine Saloon in Gettysburg has been called a dive bar, a local novelty, a charming watering hole and a hidden gem. But thanks to social media, the “Mine Bar” is no longer Gettysburg’s best kept secret.

If you want to know what makes Reliance Mine Saloon so special, picture a cozy pub-like bar with a roaring wood-burning fireplace during the winter months.

Add in an eclectic array of local characters, tour guides and historians who frequent the establishment, and you have the ingredients for a fun-filled and memorable Gettysburg experience.

Past Lane Travels Contains Affiliate Links And Is A Member Of The Amazon LLC Associates Program. If You Make A Purchase Using One Of These Links, We May Receive Compensation At No Extra Cost To You. Read Our Disclaimer For More Information.

If you’re thinking that the Reliance Mine Saloon is something new in town, you’d be wrong. In fact it has been in operation for 49 years!

Many locals grew up frequenting the bar and some notable local political figures even bartended there in their younger days.

The idea for the business started in 1973 when local businessman Paul Witt graduated from college and decided he wanted to open a bar.

His father, who owned the adjacent Quality Inn, offered him a seldom-used meeting room that had no windows. For that reason, Paul came up with the idea to use mining as the theme for the establishment.

The young entrepreneur’s next step was decide on a name. He searched through the table of contents of mining books at the Gettysburg College Library and came across the long-defunct “Reliance Mine.”

Then, as they say, the rest is history. The Reliance Mine Saloon opened its doors in November of 1974 and has been open ever since.

Going Underground At The Reliance Mine Saloon

You aren’t really underground when you go to the Reliance Mine Saloon, but when you enter the bar from the parking lot along the Taneytown Road, you feel like you’re entering a mine shaft.

A creaky door takes you down a narrow hallway that leads to another door where you enter the bar.

Dim lighting, enhanced only by a blazing fire during winter months, adds to the feeling that you’re below ground.

A Museum And A Bar

Being a history enthusiast, I enjoy being able to see the mining memorabilia that is displayed on the walls. When Paul was just starting out, he traveled to mining towns and advertised in the local papers that he was looking for artifacts.

Some of the items that are now on display at the Reliance Mine Saloon include vintage lights on the walls (now electric), that had originally been used for both illumination and detecting gases.

There is also a variety of old mining hand equipment. Calipers used to measure sizes and huge hand drills hang on the wall, along with tampers with copper heads. (Copper was used because it didn’t give off sparks).

There are also vintage mining photos displayed throughout.

Another one-of-a-kind item in the Reliance Mine Saloon is a mural of a mining colliery created by artist Jean di Ricardi.

The piece of art takes up an entire wall, and if you look closely, you will see two small figures on the left. One of them is owner Paul Witt and the other is the artist.

Canary In The Coal Mine

Every detail of the mining theme is covered at Reliance Mine Saloon, including the proverbial canary in the coal mine that hangs over one of the booths—albeit with a fake canary in the bird cage.

What does canary in the coal mine mean?

The phrase canary in the coal mine refers to the former practice of taking live canaries into mines to test for the presence of toxic gases. In coal mining, carbon monoxide was particularly dangerous because it is odorless and deadly.

Why canaries? Canaries are good early detectors because birds get a double dose of air when they breathe. That makes them more vulnerable to gases, providing an early warning.

Canaries were phased out by automated equipment in 1986, but some were still in use as late as 1996. They were also used to detect dangerous gases during both World Wars, and The New York Times reported that canary breeders could barely keep up after September 11, 2001.

The canary’s role in mines became so engrained in the English language that “a canary in the coalmine” is now a well-known phrase, used to refer to early indicators of potential hazards.

For Civil War enthusiasts, the Reliance Mine Saloon is a place where they can meet up with local historian William Frassanito.

Frassanito or “Frazz” is best known for revealing that one of the most iconic images of the war had been staged by the famous Civil War photographer Alexander Gardner.

An earlier writer had noticed that the body had been moved, because the same soldier appeared in another photo at a different place.

But it was Frassanito who first provided the details in his popular 1975 book Gettysburg: A Journey In Time, and who first began to use Civil War photographs as historical documents.

It is now well known that Gardner and his crew found the well-preserved body a few days after the battle and carried it across a swath of rocky terrain to a more photogenic spot at a stone barricade. That site is still marked today with a picture and marker at Devil’s Den.

Frazz keeps a fairly regular schedule, appearing at the bar on Wednesdays and Fridays.

(Note: He drinks Coors Light, if you want to buy him a beer).

What To Drink At The Reliance Mine Saloon

“The beer is good and the company is great.”

Reliance Mine Saloon does not serve food, but guests are welcome to bring their own and eat there.

The Saloon is known for having a long list of unique beers, a large variety of whiskey labels and a number of enticing drink specials.

One of their beers on tap is Cloud Sourced. This is a newcomer to their year-round lineup that has citrus juiciness balanced with a soft malt core.

They also have a large variety of beers in bottles and cans, including Camp Amp, a milk stout brewed with graham crackers, cinnamon, marshmallows, cocoa powder and vanilla beans added.

Another one that caught my eye is Peanut Butter Porter, a classic Porter, rich with the delicious harmony of peanut butter. The description says, “Open the top on this flavorful beer for a silky smooth drinking experience. No spoons required.”

Under “Last Call” on the website menu, Reliance Mine has Lagerkoller, a traditional Baltic Porter, as well as a Nana Bread Beer. (Sounds good!)

The bar also has a wide selection of whiskey and bourbons, including Michter’s 20-year-old bourbon, which is a bargain at $75 a shot. (It sells in bars in Louisville and other places for more than $200 a shot).

Old Rip VanWinkle 10-year for $25 a pour and Thomas Handy Sazcarac Rye for $14. At the lower end is Knob Creek Rye Singel for $9 and Buffalo Trace for $7, among others.

You can find the Reliance Mine Saloon’s most up-to-date information on their Facebook page.

Where is the Reliance Mine Saloon Gettysburg?

The parking lot can be found when heading out of Gettysburg on Taneytown Road. There is no street address but you can’t miss the giant coal cart sign on the right hand side. The GPS address is 29 Taneytown Road.

Does the Reliance Mine Saloon serve food?

No, they do not serve food, but you are welcome to bring your own.

What are the hours of operation for the Mine Bar?

At the moment the bar is open Tuesday – Saturday from 6 p.m. to midnight. (Give or take)

Does the Reliance Mine Have specials?

What kind of selection does Reliance Mine have?

This bar prides themselves on the best craft beer and whiskey selections in Gettysburg and beyond. Follow them on Untappd for updates to their beer menu and Facebook for special whiskey releases.

What’s Near the Reliance Mine Saloon?

Gettysburg Diorama: 241 Steinwehr Avenue. See the ENTIRE battlefield at one time and watch the troop movements for all three days of battle. The battlefield covers 6,000 acres, an area large enough to be difficult to visualize.

Lincoln Train Museum: 425 Steinwehr Avenue. Celebrating the history and the heroes of America with Abraham Lincoln! Experience the spirit of the men and women who achieved our American independence as you ride the rails.

Planning a Trip to Gettysburg?

If you’re planning a trip to Gettysburg, you might also enjoy Mistakes To Avoid When Visiting Gettysburg and The Best Time To Visit Gettysburg Battlefield.