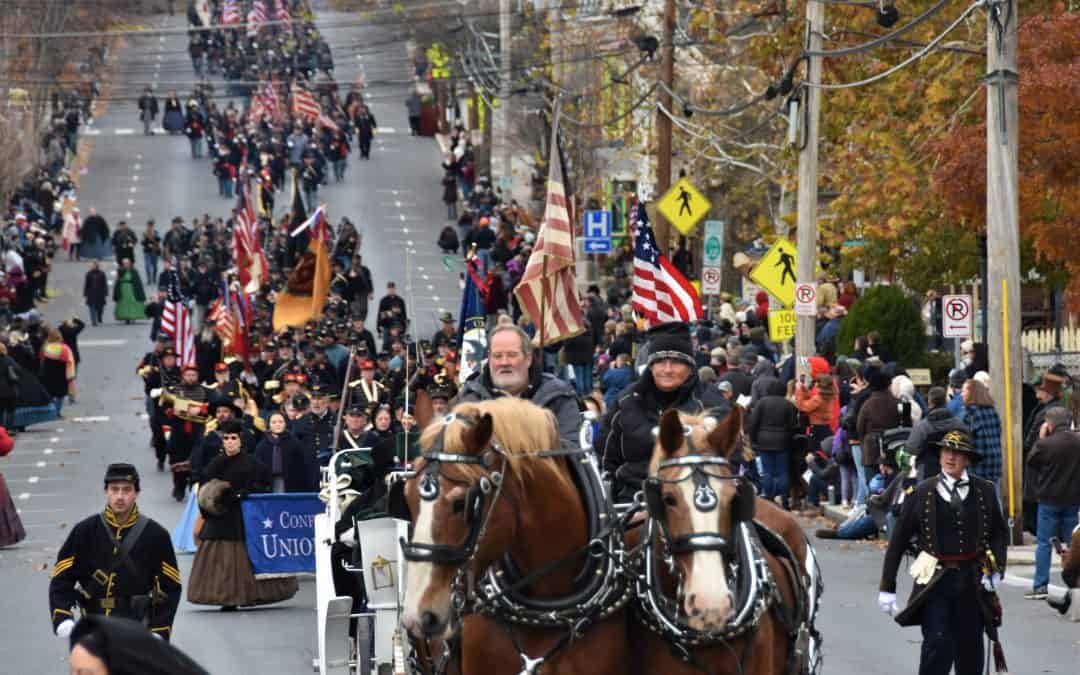 If you’re not from Pennsylvania you may have never heard of Gettysburg Remembrance Day — but it’s a big deal here! In fact, it’s one of my favorite “holidays.”

If you want visit Gettysburg, I recommend Remembrance Day weekend as one of the best times to do so. Yes, the weather is unpredictable and often cold, but nothing compares to seeing the sidewalks filled with period-dressed living history enthusiasts and reenactors as they stroll throughout the town.

In fact, if you visit a local pub, you might find yourself sitting beside a Civil War general or a beautifully dressed Victorian lady. There are more period-dress visitors strolling around Gettysburg during Remembrance Day weekend than modern-dressed people.

For those of you who are not familiar with Remembrance Day in Gettysburg and the one-of-a-kind events held throughout the weekend, read on to find everything you need to know.

What Is Gettysburg Remembrance Day?

While a cemetery dedication may not seem like a big deal, it became an important page in our nation’s history because of a short oration given by President Abraham Lincoln. Perhaps you’ve heard of it? It’s now better known as the Gettysburg Address.

The 271-word speech came just four and a half months after the two armies clashed during the three-day Battle of Gettysburg (July 1, 2 and 3, 1863). Today, the weekend nearest to November 19 is celebrated with Remembrance Day activities… lots of them.

So keep reading to find out what’s happening throughout this wonderful Civil War-themed weekend.

Remembrance Day in Gettysburg kicks off at 10:15 a.m. on November 19 with a wreath-laying ceremony at the Soldiers’ National Monument, followed by the Dedication Day program at 10:30 a.m. at the cemetery Rostrum.

There is a different keynote speaker each year, usually someone well known in the field of history or the Civil War. The program also features a U.S Naturalization and Citizenship ceremony.

Spectators to this ceremony can stand or bring a lawn chair to the event. A limited number of seats are available.

Parking is provided at the Gettysburg National Military Park Museum and Visitor Center in Lot 3, with free shuttle service on Rabbittransit’s Gold Line Shuttle. The shuttle operates from 9 a.m. until 5:30 p.m. 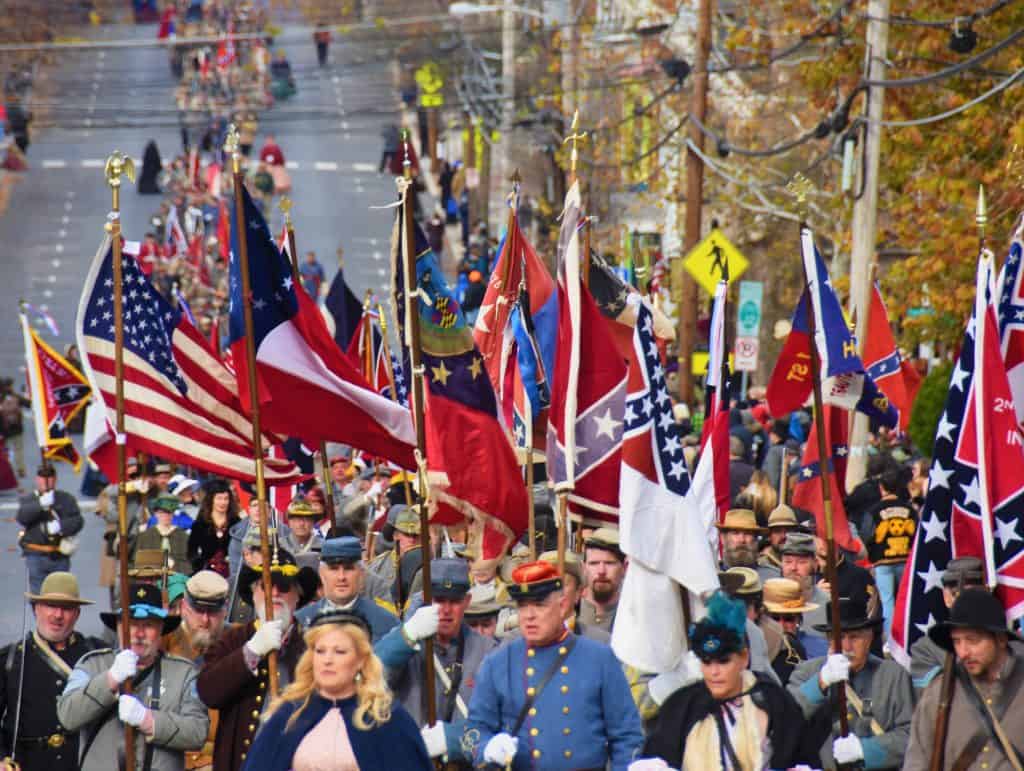 The highlight of the weekend for locals and visitors alike is the Gettysburg Remembrance Day Parade.

Hundreds of living history enthusiasts and reenactors take part in the parade — from civilians and ladies in mourning, to cavalry, infantry and artillery units.

Don’t be surprised if you see Robert E. Lee, General Ulysses S. Grant or even Abraham Lincoln! Bands play patriotic tunes and the atmosphere on the streets is one of commemoration and celebration.

Hot cider is always on tap — and most years you will want a cup because the weather is cold in November.

Pro Tip: Parking is somewhat hard to find and street closures make navigation very tricky. Plan to arrive early and wear comfortable walking shoes. Water or a thermos of coffee are also good ideas, though both are available from street vendors along Steinwehr Avenue.

What Times Does the Remembrance Day Parade Start?

The Gettysburg Remembrance Day Parade kicks off at 1 p.m. It can take 15 minutes or so for the participants to make its way to the bottom of the hill on Baltimore Street to Steinwehr Avenue, which is about the halfway point. 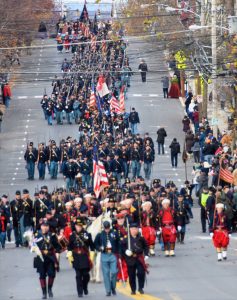 The parade forms on Lefever Street, and proceeds onto East Confederate Avenue, taking a left onto Middle Street, and then left onto Baltimore Street.

The parade then takes a slight right onto Steinwehr Avenue until it reaches the Gettysburg National Park entrance opposite General Pickett’s Buffet, (Cyclorama Drive) and turns left where participants disperse.

Pro Tip: Spectators can get a good view of the parade anywhere along the route. The intersections of Confederate Avenue/Middle Street, Middle Street/Baltimore Street and Baltimore Street/Steinwehr Avenue provide the best places for photographs.

Just like days from the past, the activities of Remembrance Day are highlighted by historic balls in Gettysburg.

The Remembrance Day Banquet and 1860s Period Ball takes place at the Eisenhower Inn on Friday, November 18. The banquet starts at 6:30 p.m., followed by a Civil War Period Ball at 8 p.m.

This  is a costumed evening of commemoration, fellowship and fun. No dance partner is needed and beginners are welcome. However, period attire (either civilian or military) is required. Music for this ball is provided by Susquehanna Travellers, and the Dance Masters are Tom & Leslie Mack.

The National Civil War Ball of Remembrance Day is held on Saturday at the Gettysburg Wyndham Hotel. Period dress is encouraged and requested but is not required.

There is no dance experience is required for this Ball. All dances are demonstrated and friendly instructors are on the floor to assist those who are new to period dancing. Authentic Civil War music will be provided by the Philadelphia Brigade Band and the steps are led by the Victorian Dance Ensemble.

Proceeds from this ball are donated to the Gettysburg National Military Park for monument preservation, which raised more than $80,000 over the years. This Ball is sponsored by the Sons of Veterans Reserve, the Military Dept. of the Sons of Union Veterans of the Civil War.

Members of Civil War hereditary groups, both Union and Confederate, all military and civilian re-enactors, and supporters of Civil War preservation are welcome to join in the festivities.

Another one-of-a-kind event during Gettysburg Remembrance Day weekend is the Illumination at the Gettysburg National Cemetery. This year marks the 20th anniversary of this solemn tribute.

This free event takes place every year and features 3,512 luminary candles being placed on the gravesites of those who fell at Gettysburg. During the commemoration, the soldiers’ names are read throughout the evening.

This event takes place Saturday from 5:30 to 9 p.m. and is subject to weather conditions. 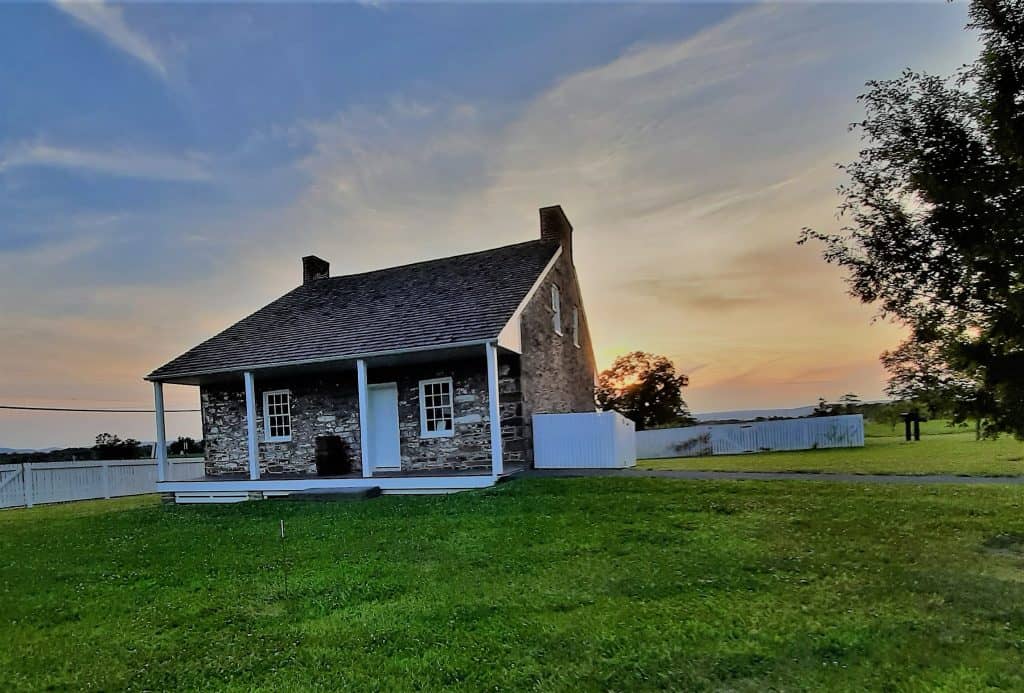 As part of this year’s Remembrance Day in Gettysburg Robert E. Lee’s Headquarters on Buford Avenue is open, giving visitors a chance to take a peek inside one of the most historic buildings on the battlefield.

This is the last time the house will be open in 2022. During the Battle of Gettysburg, this small stone house was the home of 69-year-old widow Mary Thompson.

The property surrounding the house played a pivotal role in the severe fighting on July 1, 1863, and was a key position in the Confederate line for the rest of the engagement.

The landscape and building have been preserved and restored to its wartime appearance by the American Battlefield Trust.

In addition to being able to go inside the house, there is a self-guided interpretive trail with five signs explaining the events at the headquarters from July 1-3, 1863. The trail is open dawn to dusk.

The Wills House Opens Its Doors

The home where Abraham Lincoln completed the Gettysburg Address will also be open, free of charge, during Gettysburg Remembrance Day weekend from 1 to 5 p.m.

The three-story brick house at 8 Lincoln Square was the home of David and Catherine Wills before, during, and after the Battle of Gettysburg.

President Abraham Lincoln was one of their house guests the night before the dedication of the Soldiers’ National Cemetery. Lincoln finished composing his Gettysburg Address in the second story bedroom the evening of November 18, 1863.

The David Wills House exhibits provide visitors the opportunity to learn about the Wills family and the events that happened in Gettysburg, and the legacy of Lincoln’s Gettysburg Address.

Pro Tip: Street parking is hard to come by, but the Race Horse Alley Parking Garage is located one block north between Carlisle and Stratton streets. 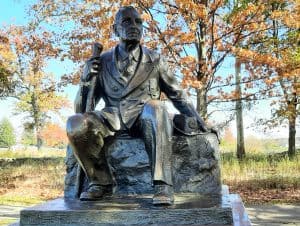 You may also hear people refer to Remembrance Day as Dedication Day because the two events have blended together over the years.

The Sons of Union Veterans, who organize many of the activities, call it Remembrance Day in honor of those who gave their lives in the war.

In fact their parade ends at the Albert Woolson memorial, who was the last surviving Union soldier. (Woolson was born in 1850 and enlisted as a Drummer Boy. He died in 1956).

The U.S. Senate and House of Representatives issued a joint decree in 1947 designating the anniversary of the Gettysburg Address on November 19 as “Dedication Day.”

Each year since 1938, the Lincoln Fellowship of Pennsylvania has commemorated the speech and the rededication of the  Gettysburg National Cemetery where Lincoln gave his address.

Many people chose to visit Gettysburg on the anniversary of the Battle of Gettysburg, which coincides with the Fourth of July weekend. (The battle took place July 1, 2 and 3, 1863).

If you like hot and humid weather and don’t mind crowds, the battle anniversary is a great time to experience this small town in Adams County, Pa. There are lots of extra events that weekend and everyone is in a celebratory mood.

But for a more relaxing and less-crowded weekend, Remembrance Day in Gettysburg is highly recommended.

If you’re planning a visit to Gettysburg, make sure you check out the post Historical Sites No One Ever Sees and explore the Best Time To Visit Gettysburg Battlefield.

You may also want to take a look at The Gettysburg Handbook: Insider’s Travel Guide.