Old John Burns In The Battle Of Gettysburg 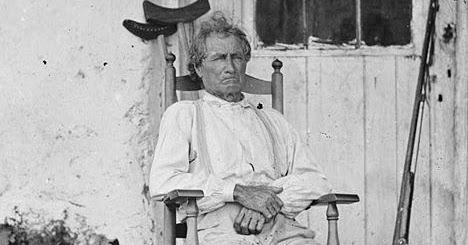 The story of old John Burns, who fought in the Battle of Gettysburg, is an interesting one. I call him “old” because was a veteran of the War of 1812, and was 69 when he picked up his musket during the first day of the Battle.

The fire of patriotism obviously burned bright in John Burns. Here is his Gettysburg story.

John Lawrence Burns was not from Gettysburg originally. He was born in Burlington, New Jersey in September of 1793. In addition to serving in the  War of 1812, Burns also served in the American-Mexican war.

Nonetheless, Burns was a patriot and devoted to his country. When the Civil War broke out, despite being almost 68, he attempted to enlist in the Union army.

Needless to say, Burns was rejected, but was given the job of serving as a constable in Gettysburg.

When Confederate General Jubal Early arrived in Gettysburg,  Burns resisted the Confederates’ authority and was jailed. As the enemy troops departed, Burns was released from jail — but he didn’t just sit around.

Instead, he went out and arrested any Confederate stragglers he could find.

Some of the links in this post may contain affiliate codes.

On the first day of the Battle of Gettysburg (July 1, 1863), John Burns heard the sounds of the battle. Grabbing his flintlock musket and powder horn, he told his wife, “I’m going to see what is going on.”

Making his way toward the chaos of battle, Burns came across a wounded Union soldier. Since the soldier no longer needed his weapon, Burns asked if he could use the injured man’s more modern rifle.

The soldier agreed and Burns moved on with the rifle, sticking the gun cartridges in his pocket.

When Burns found Major Thomas Chamberlin of the 150th Pennsylvania Infantry, he requested to be allowed to fall in with his troops.

“His somewhat peculiar dress consisted of dark trousers and a waistcoat, a blue “swallow tail” coat with burnished brass buttons, such as used to be affected by well-to-do gentlemen of the old school about 40 years ago, and a high black silk hat, from which most of the original gloss had long departed, of a shape to be found only in the fashion plates of the remote past.”

Despite his skepticism about the request, Chamberlin referred him to the regimental commander, Colonel Langhorne Wister. Colonel Wister sent the aged Burns into the woods next to the McPherson Farm, where he would find better shelter from the sun and enemy bullets. 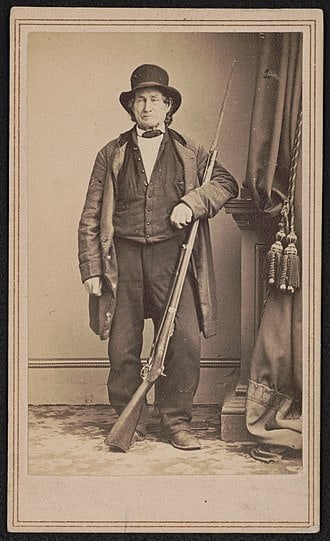 Anyone who knows about the Battle of Gettysburg realizes that the McPherson Farm was the scene of intense fighting.

John Burns ended up fighting with the famous Iron Brigade throughout the afternoon. In fact, he served as a sharpshooter, in one case shooting a charging Confederate officer from his horse.

But as the Union line began to give way and fall back to the Seminary, Burns received wounds in the arm, the leg, and even his breast. With their lines being overrun, the Union soldiers ended up leaving him behind on the battlefield.

Despite his injuries, the old man crawled away from his rifle and buried his ammunition. When the Confederates overtook the field and discovered him, he convinced them he was a noncombatant, seeking aid for his invalid wife.

The Confederates believed him and even had his wounds dressed by their surgeons.

This was a truly narrow escape for old man Burns. According to the rules of war, he was subject to summary execution as a non-uniformed combatant, otherwise known as a bushwhacker.

After having his wounds dressed, Burns crawled to the cellar of the nearest house later that evening, and was then conveyed to his own home.

As the story of John Burns exploits at the Battle of Gettysburg began to spread, it captured the interest of famed photographer Mathew Brady. Two weeks after the battle, Brady’s assistant Tim Sullivan went to Gettysburg and photographed old man Burns.

Burns posed for the photo while recuperating in a rocking chair, with a pair of crutches and a musket beside him, that is now famous. 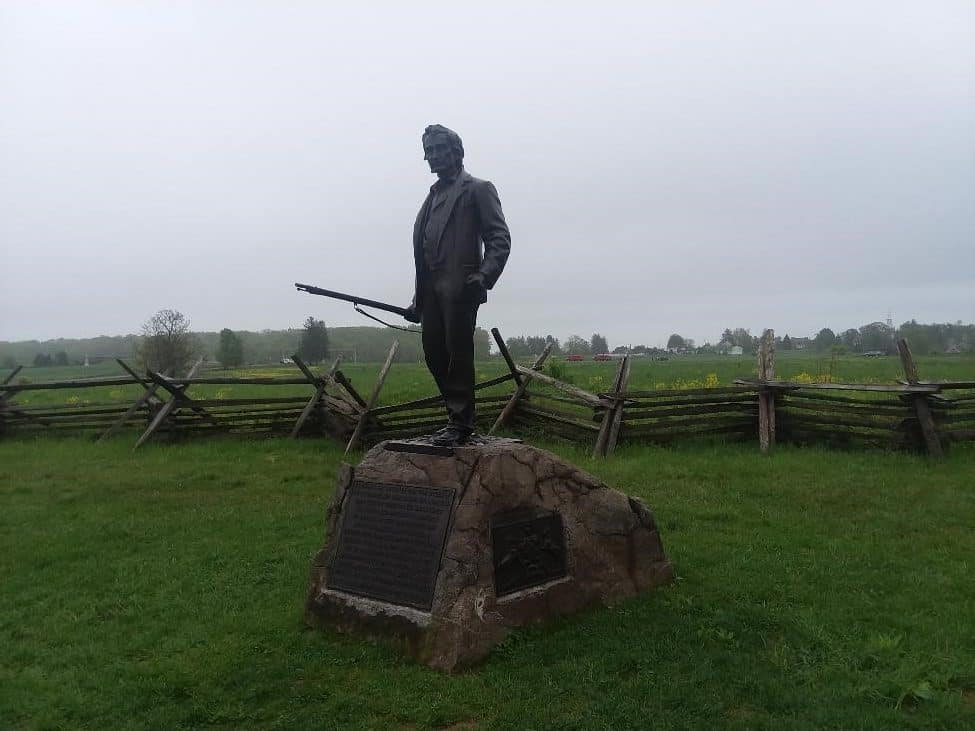 The monument to John Burns, who fought in the Battle of Gettysburg as a civilian at the age of 69.

Monument To John Burns in Gettysburg

The popularity of John Burns’ participation in the battle grew in the post war years. His home on Chambersburg Street was razed after his death and veterans of the battle thought something should be done to commemorate his services.

A monument was eventually placed on the field where Burns had fought with the 150th Pennsylvania and 7th Wisconsin regiments, next to Herbst Woods. Burns looks defiant, with a clenched fist, carrying his borrowed rifle.

Placed upon a boulder taken from the battlefield, the monument was dedicated on July 1, 1903, on the occasion of the 40th anniversary of the battle.

The tablet on the monument to John Burns in Gettysburg reads:

My thanks are specially due to a citizen of
Gettysburg named John Burns who although
over seventy years of age shouldered
his musket and offered his services
to Colonel Wister, One Hundred and
Fiftieth Pennsylvania Volunteers.
Colonel Wister advised him to fight in the
woods as there was more shelter there
but he preferred to join our line of
skirmishers in the open fields. When the
troops retired he fought with the Iron
Brigade. He was wounded in three places.”
-Gettysburg report of Maj.-Gen. Doubleday.

If you want to visit the monument to John Burns, it is located west of Gettysburg on the east side of Stone Avenue just south of Chambersburg Road (U.S. 30).

Burns is buried in Evergreen Cemetery in Gettysburg, and is one of only two graves with permission to fly the American flag twenty-four hours per day. The other grave is that of Jennie Wade, the only civilian killed during the battle.

His original gravestone was vandalized, but replaced in 1902, bearing the inscription “Patriot.”

Planning A Trip To Gettysburg?

Romantic Things To Do In Gettysburg