What Is Fort Macon Known For?

If you’re asking the question: “What is Fort Macon Known for?” read on! I ran across Fort Macon while on a brief getaway to Bogue Island in North Carolina.

Though I had hopes of doing some research for my next book while there, I never dreamed I’d run across an old fort that had been used during the Civil War.

What Is Fort Macon Known For?

Fort Macon’s original purpose was to guard the eastern North Carolina coastline, specifically to protect Beaufort Inlet and Beaufort Harbor. Named after Nathaniel Macon, who was a U.S. Senator from the State of North Carolina, the fort was built by the US Army Corps of Engineers.

This part of the eastern North Carolina was highly vulnerable to naval attacks in the 18th and 19th centuries from both plundering pirates and enemy warships.

The famous pirate, Blackbeard, along with other lesser known pirates, passed through Beaufort Inlet at will, while successive wars with Spain, France and Great Britain during the Colonial Period set the stage for potential attacks. 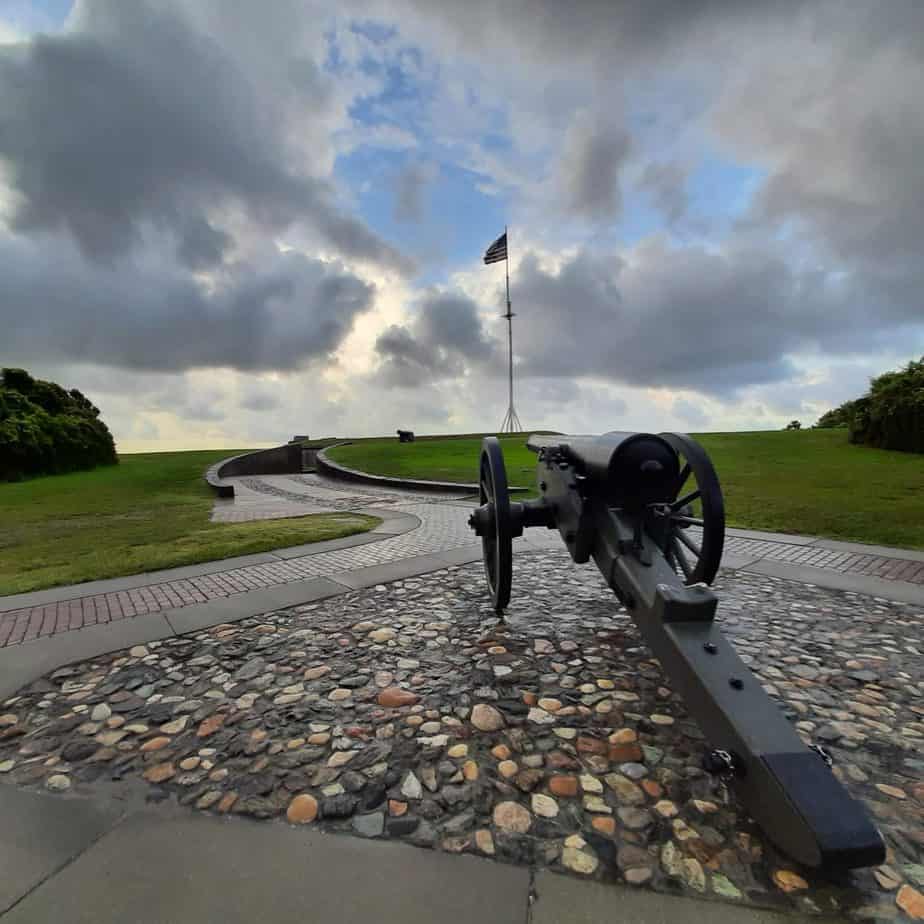 Fort Macon was constructed between 1826 and 1834 to guard against an invasion from England or Spain, both of whom had invaded the port in the eighteenth century.

An invasion from a foreign country never came but the fort was used during the War Between the States, the Spanish American War, and World War II. It also served as a military prison from 1862-1877. 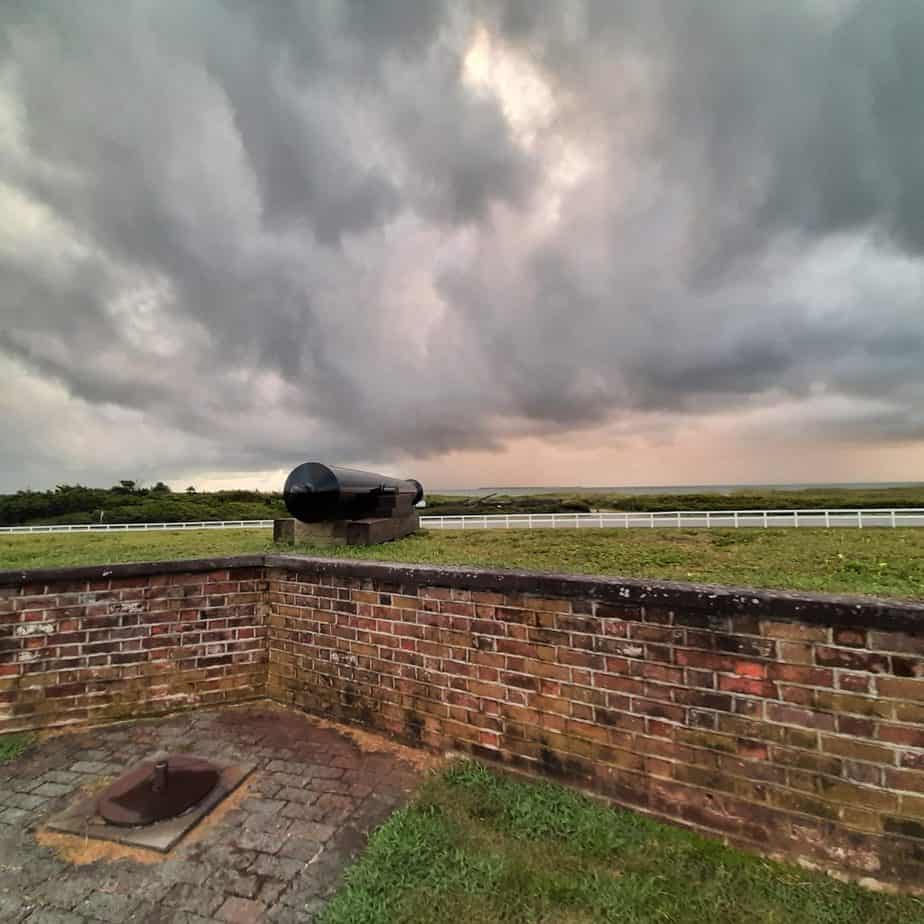 What Is Fort Macon Known For During The Civil War?

Confederate forces occupied the fort for a year, preparing it for battle and arming it with 54 heavy cannons. Early in 1862, Union forces commanded by Maj. Gen. Ambrose E. Burnside swept through eastern N.C., and part of Burnside’s command under Brig. Gen. John G. Parke was sent to capture Fort Macon.

Colonel Moses White and 400 North Carolina Confederates in the fort refused to surrender even though the fort was hopelessly surrounded.

On April 25, 1862, Parke’s Union forces bombarded the fort with heavy siege guns for 11 hours. They were aided by the fire of four Union navy gunboats in the ocean offshore and by floating batteries in the sound to the east.

There was such extensive damage that Col. White was forced to surrender the following morning, April 26. The Union army held Fort Macon for the remainder of the war.

Five-sided Fort Macon is made up of 2,379,546 bricks – more than any other U.S. fort. Twenty-six vaulted rooms (or casemates) are enclosed by outer walls that are 4.5 feet thick.

Other features of the fort include powder magazines, counterfire rooms with cannon emplacements, and a wide moat, which served to protect the fort when flooded with waters from Bogue Sound. An inner court or parade ground is now the scene of historic reenactments during special events. 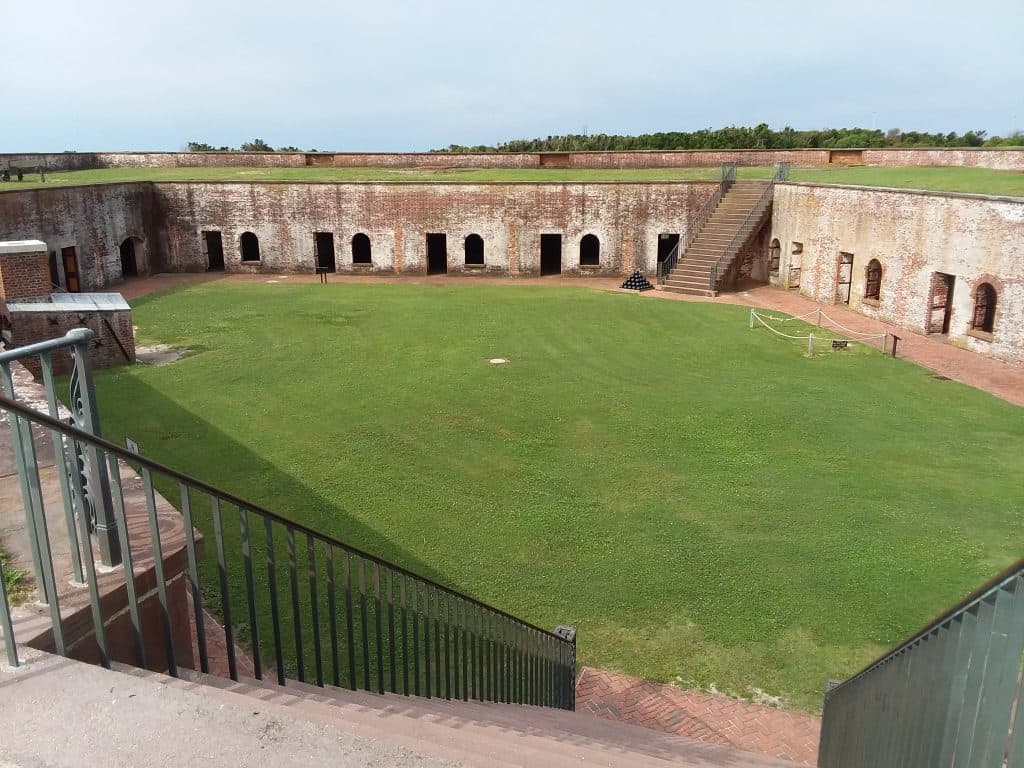 Even though Fort Macon is the second most visited park in North Carolina, we mostly had the entire place to ourselves. It was really fun to get to wander around and look out over the water.

It was warm that day with a nice breeze…I can’t imagine the heat of summer pounding down on soldiers in hot uniforms.

Fort Macon made my getaway even better than I’d hoped. It’s always fun to find some unexpected history. It’s all around us, just waiting to be found.

How Many People Visit Fort Macon?

Fort Macon is one of North Carolina’s most visited state parks, welcoming more than 1 million visitors each year.

More To Do At Fort Macon State Park

If exploring the fort is not to your liking, check out the park’s hiking trails.

The beach is always available for hikes. As you walk along the beach you may see one of the 302 different species of birds found in the park or experience the thrill of watching dolphins playing in the ocean.

If you want a short walk, check out Yarrow’s Loop. It’s a quarter mile nature trail that starts and ends at the north end of the fort parking lot. Information signs along the trail tell about some of the common plants and animals that can be found in the park.

If you’re looking for a longer trail, then the Elliott Coues Nature Trail is for you. It’s a new hiking trail that connects the Fort area with the Swim Beach. It stretches approximately 3.2 miles round trip and travels along the marsh, through the maritime forest, and through the sand dunes.