Remembering the Sabers and Roses Ball 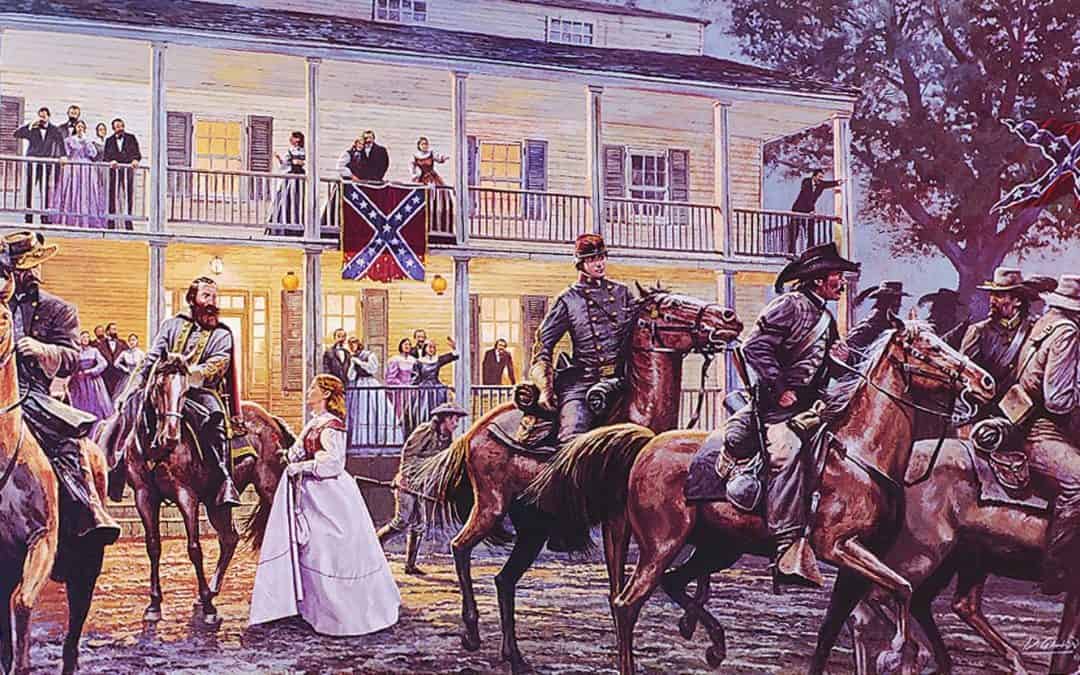 Visiting the house where the Sabers and Roses Ball took place has long been on my bucket list of Civil War destinations.

During my trip to the National Museum of Civil War Medicine, I decided to visit this historic building that is located just south of Frederick, Md., in Urbana. Though it once stood at the edge of a small village it is now surrounded by urban sprawl. That doesn’t take away from the history it witnessed when it served as the scene of the Sabers and Roses Ball, hosted by the legendary Confederate General J.E.B. Stuart.

Artwork Of the Sabers and Roses Ball

The above artwork by renowned Civil War artist Dale Gallon depicts a scene from the famous Sabers and Roses Ball in 1862 during the Maryland Campaign.

Painting description: After saying goodbye to Anne Cockey at a ball in Urbana, MD, on Sept. 8, 1862, J.E.B. Stuart and his men attack and drive off nearby Yankee raiders.

Thankfully, the building in the background of this beautiful painting by Dale Gallon still stands, although it is now bordered by major highways and noisy commercial establishments.

Known as the Landon House (and as the Stancioff House), the large three-story frame house has a notable two-story full length galleried porch that makes it easily recognizable as the site of the Sabers and Roses Ball. 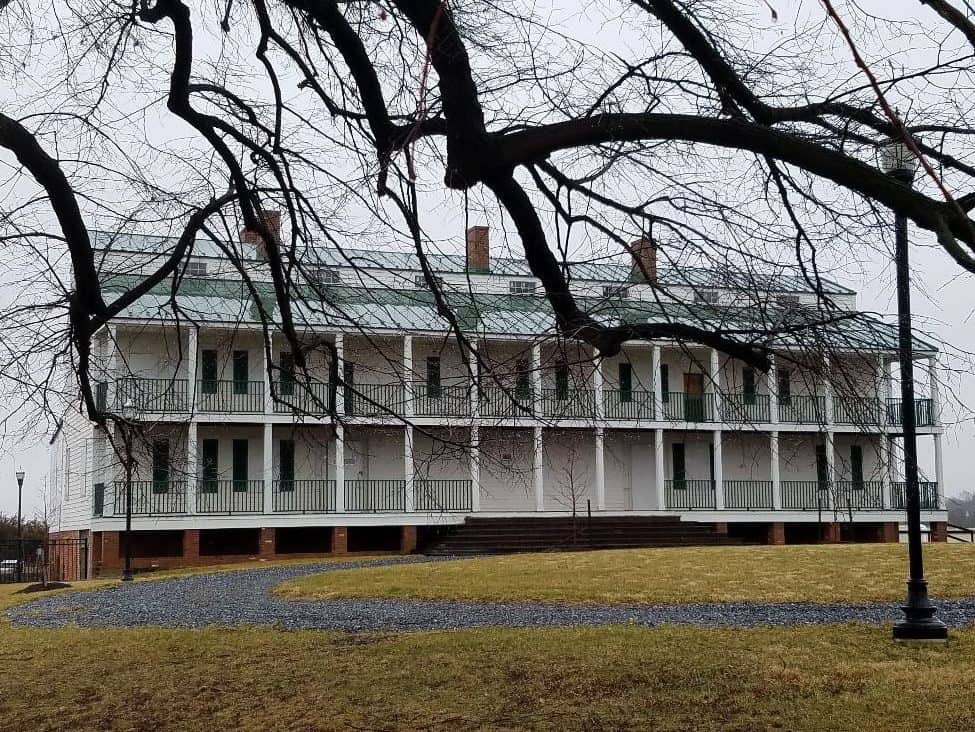 The Landon House in Urbanna, Md., still stands, but is surrounded by sprawl.

The romantic story of the legendary Sabers and Roses Ball involves dashing cavalry, local belles, and gallant combat between dances.

I first heard about the event when reading the memoirs of Heros von Borcke, a Prussian officer who came to America to take part in the war. He served under General J.E.B. Stuart, and the two became good friends.

The Story Behind The Sabers and Roses Ball

According to von Borcke, the Sabers and Roses Ball came about quite by accident when General Stuart and his men were encamped in Urbana, Md. von Borcke is a bit wordy in his description, as is typical of the period, but it does paint a romantic picture of the events that led up to the ball. He writes:

“Leaving to our fair friends the choice of their partners, we were guided by them to a large building, crowning the summit of a gentle hill on the edge of the village, from which a broad avenue of trees sloped downwards to the principal street. The building had been occupied before the breaking out of the war as an academy, but was now entirely deserted, and our footsteps echoed loudly as we walked through its wide, empty halls, once so noisy with human voices.

Each story of the house had its ample veranda running round it, and from the highest of these we had a magnificent view of the village and the surrounding country. The night was calm, the dark blue firmament was besprinkled with myriads of stars, and the moon poured over the landscape a misty bluish light that made it all look unreal. One might have thought it a magical scenic effect of the theatre… had not the camp-fires of our troops and the constant neighing of the horses reminded him of the realities by which he was surrounded.”

Von Borcke notes that, as they were walking through the empty building, General Stuart mentioned that it would be a wonderful place to give a ball in honor of the Confederates’ arrival in Maryland.

“It was at once agreed that the ball should be given. I undertook to make all necessary arrangements for the illumination and decoration of the hall, the issuing the cards of invitation, &c., leaving to Stuart the matter of the music, which he gladly consented to provide…

“A soldier’s life is so uncertain, and his time is so little at his own disposal, that in affairs of this sort delays are always to be avoided; and so we determined on our way home, to the great joy of our fair companions, that the ball should come off on the following evening.”

This is Civil War artist Mort Kuntsler’s depiction of the scene.

Von Borcke describes what happened next:

“Invitations to the ball were sent out to all the families in Urbana and its neighborhood, and to the officers of Hampton’s brigade. The large halls of the Academy were aired and swept and festooned with roses, and decorated with battle-flags borrowed from the different regiments.”

The Prussian officer then goes into some detail about the kick-off of the ball and discusses the difference between American and European societal customs before continuing with his tale.

“Louder and louder sounded the instruments, quicker and quicker moved the dancers, and the whole crowded room, with its many exceedingly pretty women and its martial figures of officers in their best uniforms, presented a most striking spectacle of gaiety and enjoyment.

Suddenly enters an orderly covered with dust, and reports in a loud voice to General Stuart that the enemy have surprised and driven in our pickets and are attacking our camp in force, while at the same moment the sound of shots in rapid succession is distinctly borne to us on the midnight air.

The excitement which followed this announcement I cannot undertake to describe. The officers rushed to their weapons and called for their horses, while the young ladies ran to and fro in most admired despair. General Stuart maintained his accustomed coolness and composure. Our horses were immediately saddled, and in less than five minutes we were in rapid gallop to the front.”

The Confederates soon found that things were by no means so desperate as they had been represented — so of course they returned to the scene of the ball!

“It was about one o’clock in the morning when we got back to the Academy, where we found a great many of our fair guests still assembled, awaiting with breathless anxiety the result of the conflict. As the musicians had never dispersed, General Stuart ordered them again to strike up…

“The dancing was resumed in less than half an hour, and kept up till the first glimmer of dawn. At this time the ambulances laden with the wounded of last night’s engagement were slowly approaching the Academy, as the only building at Urbana that was at all suited to the purposes of an hospital. Of course the music was immediately stopped and the dancing ceased, and our lovely partners in the quadrille at once became ‘ministering angels’ to the sufferers.”

Enjoying The Ball In A Time Of War

Some may think it strange that there was so much merriment among the citizens when they were surrounded by war, But music and dancing played a large role in American culture during the era of the Civil War. At the time, the Sabers and Roses Ball was not seen as the least bit unusual or out of the ordinary.

In fact, it was a bit of a necessity. The Civil War disrupted the normal social habits of both men and women, who were raised with the idea that the timely procuring of a spouse was essential. (Especially for women).

A military ball was an opportunity for “respectable” men and women to mingle at a time when such opportunities were obviously rare.

“Our horses stood saddled day and night, and Stuart and his staff slept in the open air in the shady yard of the residence of Mr. Cocky, with clothes, boots, spurs and arms on, ready for the instant action, but with these precautions we enjoyed the society of the charming girls around us to the utmost. One hour’s acquaintance in war times goes further towards good feeling than months in the dull, slow period of peace.”

Wrap-Up Of The Sabers And Roses Ball

I am very glad that the building where the Sabers and Roses Ball took place still stands, even though blacktop now surrounds the once-majestic structure and the roar of nearby traffic detracts from its graceful bearing.
The property has gone through a number of owners in the last dozen years, and was last used as a wedding and large event venue.It is marked as private property.

Your Guide To An Oak Alley Plantation Tour

A Visit To Historic Arlington House