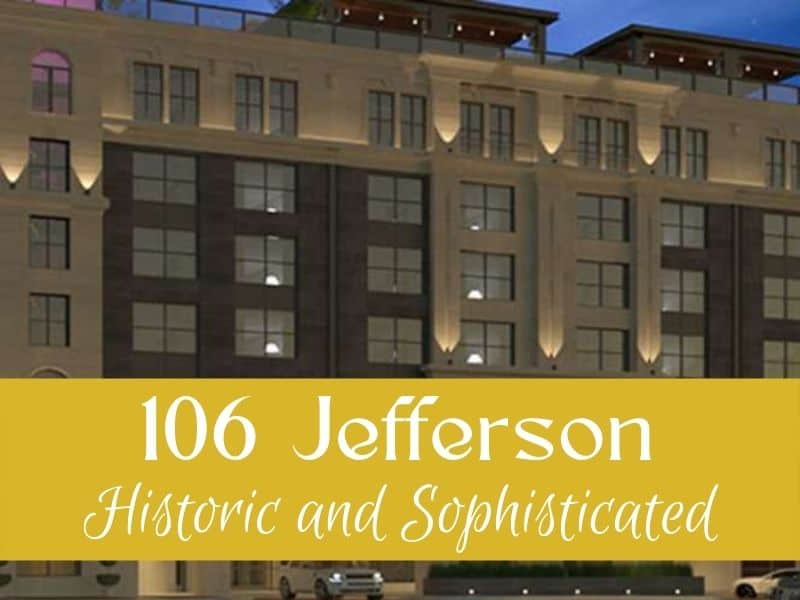 I had the pleasure of staying at the 106 Jefferson hotel while attending a travel blogger’s conference in Huntsville, Alabama, in February.

As an avid traveler, I want high quality in a hotel room. The term affordable luxury is more my style these days, and frankly, my standards are pretty high.

Here’s my experience at the historic 106 Jefferson.

I arrived at 106 Jefferson only a few minutes before the first scheduled gathering of the Southern Travelers Explore (STE) conference.

Thankfully, check-in was an absolute breeze with a friendly and welcoming front desk staff so I had enough time to get to my room and drop off my bags.

Unfortunately, I was in such a hurry that I didn’t notice the fresh flowers or the sheer magnificence of the lobby until later.

In fact I got to spend some time relaxing on the comfortable curvy couch during my stay, and found the layout of the room inviting yet luxurious—like sitting in a friend’s large, well-appointed living room.

History And Luxury At 106 Jefferson

More on my experience at the hotel in a moment. First I want to discuss one of the major draws to me in the first place.

The hotel—though modern and full of local charm—is actually a historic building that has been part of downtown Huntsville for more than a century.

History and Luxury. What could be better?

106 JEFFERSON is located on the historic site of the former Huntsville Hotel. This Victorian-era establishment stood as a hub for the growing city of Huntsville back when it was known for being a cotton town—not “Rocket City.”

Built in 1858, the hotel, was an elegant inn known far and wide for both its comfort and extravagance, and was described as “the town’s first real hostelry.”

I could almost imagine walking down the street in the 1890s and watching the traveling elite being escorted from their horses and carts to the massive doors of the Huntsville Hotel.

Descriptions of the early four-story hotel say it exuded the elegance of its time. The main parlor was inviting, with comfortable leather armchairs, an ornate fireplace, and curtains that reached from the ceiling to the floor.

The hotel was successful for many years, including during the Civil War and an outbreak of Yellow Fever. It continued to stand as a beloved Huntsville landmark until two separate fires destroyed the building.

The first fire in 1910 did much damage to the building, but the owner had plans to rebuild. The fire in 1911 extinguished those plans. Reported as being “the most devastating fire in the city’s history,”  it destroyed the entire block.

(Strangely enough, the hotel that had stood on the site before the Huntsville Hotel also burned).

The next building constructed on the site became home to the Alabama Power Company and the Jefferson Theater, and later, to the Hale Brothers Furniture store, which was another well-known local landmark.

Hale Brothers Furniture remained in operation until 2002 when it liquidated its stock and officially closed its doors.

Comfort, Hospitality And Charm at 106 Jefferson

Back to my experience at 106 Jefferson, where I was made to feel like a valued guest as soon as I walked through the door of this luxury boutique hotel.

The Room At 106 Jefferson

The 410-square-foot standard king room I had was spacious and comfortable, but it’s the little things that matter even more.

The first thing I noticed when I entered was the message on the 55-inch HD TV welcoming me by my first name. Having the soft illumination of a light along with my name on the screen of the television was a small thing, but made me feel at home.

And that was just the beginning of my 106 Jefferson hotel experience.

The hotel somehow melds its historic past with a reinvented present. Every aspect of the hotel features the sophistication of its Victorian roots, but wraps it up in a modern style.

For me though, design and amenities aren’t enough to set a hotel apart from all the others.

It’s paying attention to detail, and making guests feel truly at home that makes a hotel memorable to me.

Comfort And Class at 101 Jefferson

One of the reasons I’m very picky about what hotel I stay in is that I have a bad back. After sleeping at some hotels, I have to lie on the floor in the morning to let everything fall into the right place before I can even walk.

At the 106 Jefferson hotel, I slept (soundly!) in a bed with a Serta Suite Dreams mattress, down pillows (yay), luxurious sheets and a down duvet cover.

I just love crawling into bed with quality linens and thick blankets when I’m on the road!

The marble bathroom was roomy with plenty of space to store my things. (Another pet peeve of mine is tiny hotel bathrooms).

The spa-like walk-in shower provided a hot shower with great water pressure (Yes, I’ve had my share of half-warm showers with water trickling out at other hotels).

My room was just one of the options that guests have to choose from at the 106 Jefferson hotel.

Others room include a Double Queen; King Corner Suite (614 sq. ft.); a one-bedroom king suite; or the 985-square-foot Suites, which sleep four guests in an apartment style room.

Little things that make a big difference at 106 Jefferson hotel

Oh my, the food… and the atmosphere to go with it!

The Revivalist Restaurant at 106 Jefferson is located on the ground level of the hotel and exudes all of the charm of the South with an old-parlor appearance. They offer breakfast, lunch and dinner with a wide and varied menu.

I only ate breakfast there, and had the Stuffed Cream Cheese Praline French Toast with Berries. It was honestly one of the best breakfasts I have ever eaten. Ever!

Baker and Able Lounge/Bar: It’s nice to be able to relax with a cocktail after a long day of traveling or meetings, so I enjoy staying in hotels with a bar.

Of course, the 106 Jefferson hotel goes a step beyond that by having a “rooftop bar” called Baker and Able.

The bar/lounge is named for the notorious primates that made Huntsville famous for its efforts in space travel. You can sip on a drink and nibble on appetizers while enjoying a spectacular view of Huntsville.

Even if you don’t drink, the rooftop bar is a wonderful place to meet with friends and enjoy some light food, the ambience and spectacular views.

Location! When I travel I’m usually by myself, so I like to park my Jeep and walk as much as I can.

The 106 Jefferson hotel is close to restaurants, shopping and Big Spring International Park. The hotel is also not far away from Broadway Theatre League and the Huntsville Museum of Art.

If you’re a history lover like I am, you will find that Huntsville is full of beautiful historic homes. The hotel is located in the Twickenham district and many historic and antebellum houses are just a 15-minute walk away.

As part of the conference, I had the opportunity to visit other historic sites in the city including the Weeden House Museum and Garden and Harrison Brothers Hardware.

Alabama’s Constitution Hall Park, where the state’s constitution was signed, is another site worth a visit for taking a trip back in time. And, if you’re in the city to experience the space program, the 106 Jefferson hotel is 11 miles from NASA Marshall Space Flight Center.

Other Spaces: Since I was there for a conference, I spent a good deal of time in 106 Jefferson hotel’s conference room.

In addition to their 1,600 -square-foot Century Ballroom just off the lobby, they also have convenient, adjacent pre-function space. The accessibility to their restaurant and rooftop bar, and their location near nightlife and shopping makes it a wonderful space for both business and pleasure.

Other Special Touches at 106 Jefferson

While this hotel is a newer property, many of the items from the previous building on the property were repurposed. I appreciate this extra effort from both a historical and environmental standpoint.

The walls are decorated! The 106 Jefferson hotel is filled with custom artwork that reflects the city of Huntsville’s space race and showcases the spirit of the community.

Even the name is special. 106 Jefferson was chosen because it is also the hotel’s address.

It’s very convenient to not have to remember an additional address. When you say 106 Jefferson–it is both the location and the name.

Hospitality And Service at 106 Jefferson Hotel

All of the things listed above set the 106 Jefferson hotel apart from every other hotel I’ve stayed at…but there’s more.

I mentioned that the front desk staff was friendly and courteous, which is always nice after a long day of travel.

But when we travel bloggers returned from being bussed to different locations in Huntsville, we were always greeted at the door with someone with a big smile saying “Welcome, home.”

No matter how tired I was from meetings and sightseeing, it made my day better every single time.

Another small thing that made a big difference to me, was arriving back to my room after a long day of touring Huntsville, and finding a small stuffed monkey on my dresser from the hotel staff.

Not only was it a nice reminder of the rooftop lounge, Baker and Able, it was also just another thing to make me feel like a truly valued guest.

The Most Appreciated Gesture Of All

I left out two details about my arrival to the room, because they are two things that left the biggest impression on me.

(Yes, I had to leave the best for last)

When I walked into my room after a 7-hour drive, I saw a tray with a jar of “Sweet Dreams Infused Vodka.”

The notecard on the tray read: This vodka infusion is a relaxing blend of green tea, lavender and fresh lemon. Mix with your choice of Free Club Soda or Mediterranean Tonic. We hope you enjoy as you drift off to sleep!

What a wonderful welcome!

I don’t know about anyone else, but I hate having to go search for the ice machine. Most hotels give you a plastic container and you have to go on a hunt for the machine, which may or may not be on your floor.

That evening, after I returned from my initial meeting, I was so surprised when I picked up the elegant (heavy) ice bucket and found ice in it! I don’t know when it was placed there, but it wasn’t melted!

That sealed the deal for me. I have always been a big fan of the Hilton brand, but 106 Jefferson hotel is hands down my favorite place to stay.

What is the Curio Collection? The 106 Jefferson hotel is a Curio Collection by Hilton property. This means that it’s part of a special group of hotels curated for their one-of-a-kind character, history and artisanal touches.

Properties in the Curio Collection are all different, but they share the common goal of providing guests with an unforgettable travel experience.

Ready to book a room at 106 Jefferson?

When you book your stay, don’t forget to tell them that Past Lane Travels sent you!

If you enjoy staying in old hotels and B&B’s, you might also enjoy The Gettysburg Academy: New Bed and Breakfast in Gettysburg or El Rancho Hotel in New Mexico.