The spark that ignited a sacred tradition 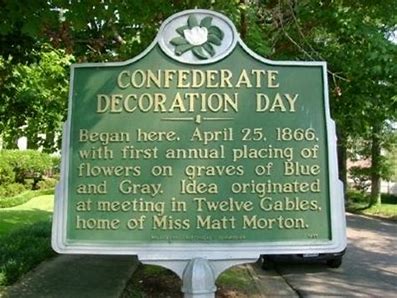 Many towns claim the honor of being the first to celebrate Memorial Day, but according to the Library of Congress, Decoration Day preceded our modern day Memorial Day by many years, with one of the first taking place in Columbus, Miss., on April 25, 1866.

The sacred tradition of honoring our war dead in Columbus began as a result of the Battle of Shiloh in April 1862. Registered as one of the bloodiest battles in American history, the conflict left 23,000 soldiers dead and thousands more injured. The wounded were transported by train to Columbus for medical care, where residents opened their homes to care for them.

Historic records say that the carpets at First Baptist Church were ripped up and used for blankets. Nearby, at the home called Twelve Gables, Martha “Matt” Morton put floor mats out for soldiers to lay on in her dining room. 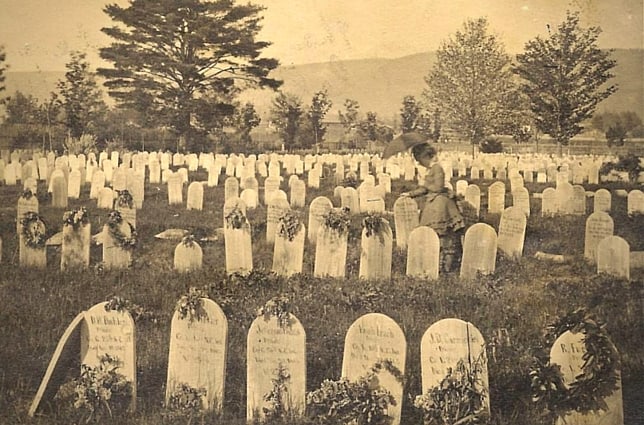 More than 2,000 of the soldiers who came to Columbus ended up succumbing to their injuries and were buried at Friendship Cemetery, just a few blocks from Morton’s home.

A few years later, on April 25, 1866, Morton and her friends were gathering for their weekly sewing club when they decided to decorate the graves. The older women reportedly dressed in black as a sign of mourning and rode in carriages down to Friendship Cemetery. The younger women dressed in white and followed the carriages. 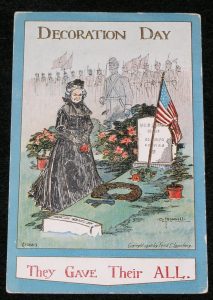 When Matt Morton, Jane Fontaine, Kate Hill and Augusta Sykes were done placing flowers from the Twelve Gables gardens on Confederate graves, they did something that shocked the nation.

They decorated the graves of 40 Union soldiers as well.

To pay respects to the enemy had been unheard of before that time. But Morton and her friends understood that the Union soldiers were not unlike the men they had loved and lost. They understood they were somebody’s sons, somebody’s husbands, somebody’s brothers, and they died serving their country.

Helping a Nation Heal
Decoration Days were not uncommon during and after the Civil War, but when the Twelve Gables flowers were set upon the graves of both kin and former adversaries, it seemed the entire nation began to heal. Newspapers spread word of the gentle gesture, and it became the spark that ignited the tradition of honoring those lost in war.

Others Claim the Title

Many other cities claim to be the birthplace of the formal celebration of Memorial Day as well. For almost as long as there’s been a holiday, there’s been a rivalry about who celebrated it first. Boalsburg, Pennsylvania, bases its claim on an 1864 gathering of women to mourn those recently killed at Gettysburg.

In Carbondale, Illinois, they’re certain that they were first because of an 1866 parade led, in part, by John Logan, the commander-in-chief of the Union veterans’ group, the Grand Army of the Republic. Two years later, he led the charge for an official holiday.

Also vying for the title is Columbus, Georgia, which claims a woman named Mary Ann Williams suggested “a day be set apart annually” to decorate the graves of fallen soldiers.

But only one town has received the official seal of approval from the U.S. government. In 1966, President Lyndon Johnson signed legislation declaring Waterloo, New York, as the “official” birthplace of Memorial Day. The tiny update village had been shuttering its businesses and taking to the streets for the first of many continuous, community-wide celebrations for about 100 years.

In May 1868, General John A. Logan,  issued a decree that May 30 should become a nationwide day of commemoration for the more than 620,000 soldiers killed in the Civil War.
On Decoration Day, as Logan dubbed it, Americans should lay flowers and decorate the graves of the war dead “whose bodies now lie in almost every city, village and hamlet churchyard in the land.”

According to legend, Logan chose May 30 because it was a rare day that didn’t fall on the anniversary of a Civil War battle, though some historians believe the date was selected to ensure that flowers across the country would be in full bloom.

When Logan died, his body laid in state in the rotunda of the United States Capitol, making him one of just 33 people at that time to have received the honor. Today, Washington, D.C.’s Logan Circle and several townships across the country are named in honor of this champion of veterans and those killed in battle.

No matter where or when it began, Memorial Day offers us a sacred day to remember the sacrifices of our fallen and to honor their memory.