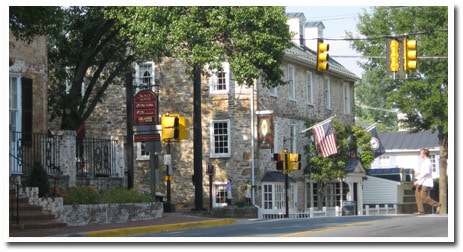 Sophisticated elegance in a small town

To say that Middleburg, Va., is one of a kind would be an understatement. Steeped in history and surrounded by horse farms, Middleburg offers something for everyone, including boutiques, historical landmarks and fine cuisine.

You can hardly drive anywhere around Middleburg without running into someone on horseback or a pack of hounds, so its not hard to figure out why its known as the nation’s horse and hunt capital.

Of course, I like it for its history as much as its horses. Middleburg was established in 1787 by American Revolutionary War Lieutenant Colonel and Virginia statesman John Leven Powell, who purchased the property from Joseph Chinn, a cousin of George Washington. Powell changed the name from “Chinn’s Crossroads” to Middleburg because of its location halfway between Arlington and Winchester on the Ashby Gap trading route (now Route 50).

One of the most historic — and well known — buildings in the town is the Red Fox Inn. Established in 1728, the Inn & Tavern rests in the heart of the historic village.

General J.E.B. Stuart and Colonel John Mosby were known to frequent the tavern during the Civil War, but other notables have visited the Inn as well.

Some of these include President John F. Kennedy, who held a press conference in the upper Tavern, and Jacqueline Kennedy Onassis who often overnighted at the Inn while on fall foxhunting holidays.

Still others include Elizabeth Taylor and U.S. Senator John Warner, who often dined in the tavern during their courtship and after their marriage. Hollywood notables who regularly entertain friends there, include Joann Woodward, Paul Newman, Tom Cruise, and Robert Duvall. 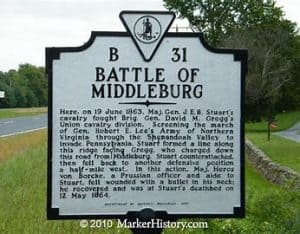 Of course, in addition to its small town ambience, I love its Civil War and Revolutionary War history. The Battle of Middleburg took place in around the town in 1863.

Rolling hills and eighteenth-century architectural treasures provide dramatic backdrops to the small-town charm of this village that is located only an hour from Washington, D.C.

I have had the opportunity to visit many of the historic homes that surround Middleburg and will have posts on them in the “Old Houses” section in the future.