A hero’s death in May

May is a beautiful month, but in Civil War history, it is also a sad one. The South lost both Thomas “Stonewall” Jackson and General J.E.B. Stuart in May, one year apart.

If you venture off I-95 near Fredericksburg, you can visit the site that was, until recently, called the Stonewall Jackson “Shrine.” Due to political correctness, the name has now officially been changed to The Stonewall Jackson Death Site so as not to glorify one of the greatest commanders in U.S. history.

After being wounded by friendly fire while scouting the battlefield at night on May 2, 1863, General Jackson was taken to a field hospital where his badly injured left arm was amputated.

Fearing there was danger of capture by the Federals, Confederate army commander Robert E. Lee selected Guinea Station as the best location for Jackson to be taken, mainly because of its proximity to the railroad to Richmond where he could then be transported to a hospital.

The General’s surgeon Dr. Hunter McGuire recorded an incident that took place on the long ambulance ride to safer territory. He said: “The rough teamsters sometimes refused to move their loaded wagons out of the way for an ambulance until told that it contained Jackson, and then, with all possible speed, they gave the way and stood with hats off and weeping as he went by.”

The building where General Stonewall Jackson died in May, 1863.

General Jackson ended up in a plantation office building on Thomas C. Chandler’s 740-acre plantation named “Fairfield.” Although offered the use of the Chandler house, Jackson’s doctor and staff officers chose a quiet and private outbuilding as the best place for Jackson to rest.

The Chandlers prepared the room using the same bed frame and one of the same blankets that is still on exhibit today. They also added the clock on the mantel with the hope that it would make the room look more homelike and cheerful.

Despite his condition and the grueling 27-mile ambulance ride, Jackson remembered his manners upon arrival to the property by apologizing to Mr. Chandler for being unable to shake hands with his host.

On May 7, Mrs. Jackson and baby daughter Julia arrived at Guinea Station and found lodging in the Chandler home. Earlier that month, the Jackson’s had spent a nine-day reunion together that had been interrupted by the renewal of fighting that called the general away.

Amazingly, that reunion was the first time General Jackson had seen his wife in a year, and the first time he met his five-month-old daughter. Mrs. Jackson wrote of that visit:

It was raining and he was afraid to take her in his arms with his wet overcoat, but upon arrival at the house, he speedily divested himself of his overcoat, and, taking his baby in his arms, he caressed her with the tenderest affection, and held her long and lovingly. During the whole of this short visit when he was with us, he rarely had her out of his arms, waking her, and amusing her in every way that he could think of—sometimes holding her up before a mirror and saying, admiringly, “Now, Miss Jackson, look at yourself.” Then he would turn to an old lady of the family and say, “Isn’t she a little gem?” When she slept in the day, he would often kneel over her cradle, and gaze upon her little face with the most rapt admiration, and he said he felt almost as if she were an angel in her innocence and purity. 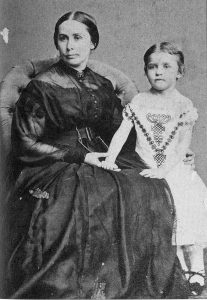 This second reunion was not nearly as pleasant. Mrs. Jackson spent most of her time at her husband’s bedside in the office, which lifted the spirits of the general. As Dr. Hunter McGuire observed:

“The General’s joy at the presence of his wife and child was very great, and for him unusually demonstrative. Noticing the sadness of his wife, he said to her tenderly: ‘I know you would gladly give your life for me, but I am perfectly resigned. Do not be sad. I hope I may yet recover. Pray for me, but always remember in your prayers to use the petition, Thy will be done.’”

Interior room of the building in which Stonewall Jackson died.

While Jackson was making progress in his recovery from his battle wounds, he took a turn for the worse after contracting pneumonia. Despite the efforts of specialists, nothing seemed to help him improve.

In recording the details of Jackson’s wound and treatment, McGuire wrote: “When his child was brought to him to-day he played with it for some time, frequently caressing it and calling it his “little comforter.” At one time he raised his wounded hand above his head and closing his eyes, was for some moments silently engaged in prayer. He said to me: “I see from the number of physicians that you think my condition dangerous, but I thank God, if it is His will, that I am ready to go.”

About daylight on Sunday morning Mrs. Jackson informed him that his recovery was very doubtful, and that it was better that he should be prepared. He was silent for a moment, and then said: “It will be infinite gain to be translated to Heaven.”

His exhaustion increased so rapidly that at 11 o’clock Mrs. Jackson knelt by his bed and told him that before the sun went down he would be with his Saviour. He replied: “Oh, no; you are frightened, my child; death is not so near; I may yet get well.”

Mrs. Jackson fell over upon the bed, weeping bitterly, telling him again that the physicians said there was no hope. After a moment’s pause he called for Dr. McGuire, and said: “Doctor, Anna informs me that you have told her that I am to die today; is it so?” When he was answered, he turned his eyes toward the ceiling and gazed for a moment or two as it in intense thought, then replied: “Very good, very good, it is all right.” He then tried to comfort his almost heart-broken wife, and told her that he had a great deal to say to her, but he was too weak.

Jackson’s Assistant Adjutant General Sandie Pendleton was so busy with the affairs of the Corps that he didn’t have time to visit the General until May 10. When he entered the room around 1 o’clock, Jackson asked him who had preached at headquarters. Pendleton replied that the whole army was praying for him, and Jackson responded: “Thank God, they are very kind. It is the Lord’s Day; my wish is fulfilled. I have always desired to die on Sunday.”

The relationship between Pendleton and Jackson was a close one. It was said that Jackson “loved him like a son.” Sandie was so affected by the conversation that he went to the porch and wept.  He later told Mrs. Jackson, “God knows I would have died for him.”

A few moments before he died he cried out in his delirium, ‘Order A.P. Hill to prepare for action! Pass the infantry to the front rapidly! Tell Major Hawks’ — then stopped, leaving the sentence unfinished. Presently a smile of ineffable sweetness spread itself over his pale face, and he said quietly, and with an expression, as if of relief, ‘Let us cross over the river, and rest under the shade of the trees.’” 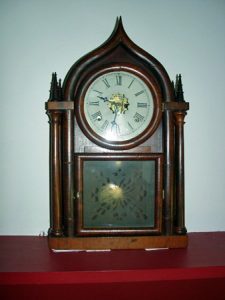 The clock still sits on the mantel where Stonewall Jackson died.

When the building is open to the public, visitors can stand in the room where Jackson died, see his bed, and hear the ticking of the same clock that he heard the last moments of his life. It is the clock that Dr. McGuire used to record the time of his death: 3:15 p.m. on May 10.

The clock, blanket and bed are said to have been saved thanks to a 12-year-old girl named Lucy Chandler, the daughter of the plantation’s owner. When Jackson passed away, Lucy was distraught. She told her mother that she wanted to trade places with Jackson because only her parents would be upset if she died, but the whole South would be upset if Jackson died.

When she became older, Lucy tucked away the clock, blankets, and some relics and kept a diagram of what the room looked like when Jackson passed away. The room and the building are set up with the help of that diagram.

It is said that Lucy also placed four Confederate flags on the posts of the bed, and that is how the site became known as a shrine. Needless to say, that piece of history has been removed and is likely lost forever.

By the time the train carrying General Jackson’s remains entered the outskirts of Richmond, an immense crowd had gathered, the largest in the history of the city. The train slowed to a crawl, then proceeded ahead for two miles to the station, surrounded by thousands of bareheaded men and weeping women. Church bells tolled and guns split the air. All businesses in the city were closed, and black crape hung everywhere.

The entire South was in mourning.

The Stonewall Jackson Shrine can be reached from I-95 by taking Exit 118 (Highway 606) and driving east on 606 for about four miles.

During your visit you may hear a CSX Transportation train rumble past the site on the old Richmond, Fredericksburg, and Potomac line.

An Earlier Love Letter to His Wife

I love to read about the personal side of the Civil War’s greatest hero’s, so here is a letter General Jackson wrote to his wife on September 25, 1862.

Darling, my heart turns to you with a love so great that pain flows in its wake. You cannot understand this, my beautiful, bright-eyed, sunny-hearted princess. Your face is the sweetest face in all the world, mirroring, as it does, all that is pure and unselfish, and I must not cast a shadow over it by the fears that come to me, in spite of myself. No, a soldier should not know fear of any kind. I must fight and plan and hope, and you must pray. Pray for a realization of all our beautiful dreams, sitting beside our own hearthstone in our own home – you and I, you my goddess of devotion, and I your devoted slave. May God in his mercy spare my life and make it worthy of you!