Caught in the Crossfire: Your sister is dead 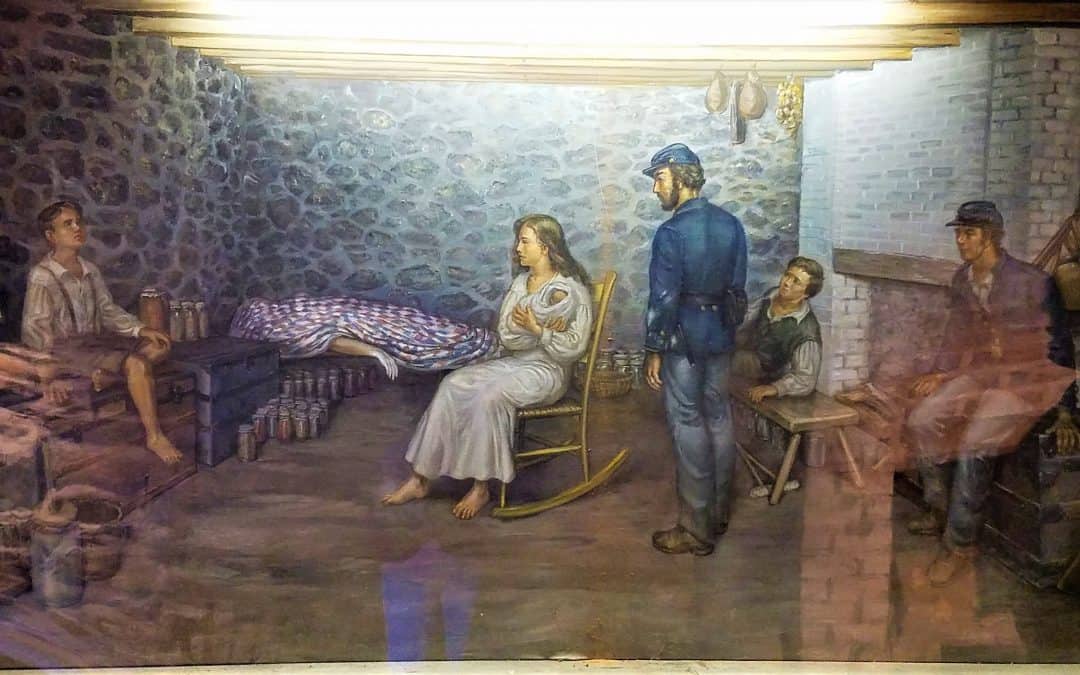 The Fourth of July holiday is a jubilant occasion for Americans as they celebrate Independence Day with fireworks and festivals. But imagine the opening days of July 1863 when the residents of a small, bucolic town in Pennsylvania came face-to-face with devastation, destruction—and even death—as two armies converged in the bloodiest battle ever fought on American soil.

The Battle of Gettysburg is one of the best-known battles in American history, yet many don’t realize that it took place over three long days and resulted in more than 50,000 casualties. Civilians were caught in the crossfire on numerous occasions when fighting spread from the fields and farms onto the very streets.  Soldiers, therefore, weren’t the only ones to pay the price. Many of the residents lost their crops, their houses, and their livelihoods. One young lady even lost her life—caught in the crossfire while performing the innocent task of kneading bread. 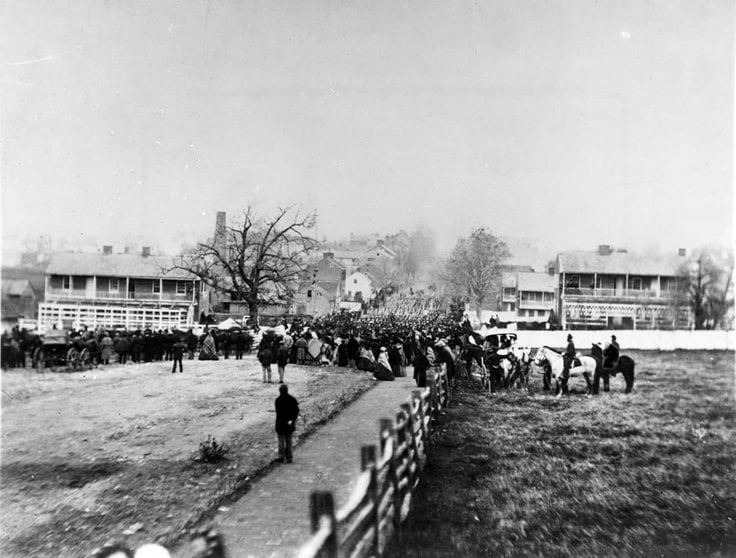 Though the citizens of Gettysburg were on alert during the waning days of June, 1863, most assumed that any major conflict would take place in Harrisburg, Philadelphia or Washington rather than in their little community. As local resident Fannie Buehler recalled “We thought the bulk of the Union soldiers were far away…and no one dreamed of a battle being fought in our town.”

For that reason, life in the town of about 2,400 went on as usual. Georgia McClellan, whose husband was away serving in the Union army, gave birth to their first child on June 26. On July 1, Georgia’s mother, Mary Anne Filby Wade, and 20-year-old sister, Mary Virginia “Jennie” (or “Ginny”) Wade, came to her brick double-house on Baltimore Street to help care for the new baby. Located just outside of town, Georgia’s house seemed a safer place than the Wade’s home on Breckenridge Street as rumors of increased military activity intensified.

But they soon found out that no place was safe. On July 1, as fighting erupted north and west of town, a bullet flew through the window and hit the bedpost where Georgia was lying with her infant. Bullet holes are still visible in the mantle of that room, which can be seen when visiting the Jennie Wade House Museum.

That same day, an artillery shell crashed through the roof, tearing a hole in the second-story brick wall between Georgia’s house and the McClains, who occupied the other side of the small duplex. Perhaps unknown to the family at the time, the armies had arrived and were maneuvering. The Confederates occupied the town to the north and the Union was setting up defenses to the south.

Georgia’s house sat in between.

Despite the harrowing sounds of the battle, the clatter of musketry and the booming of cannons, Jennie continued baking bread and furnishing water to the Union troops who were manning a nearby picket post. 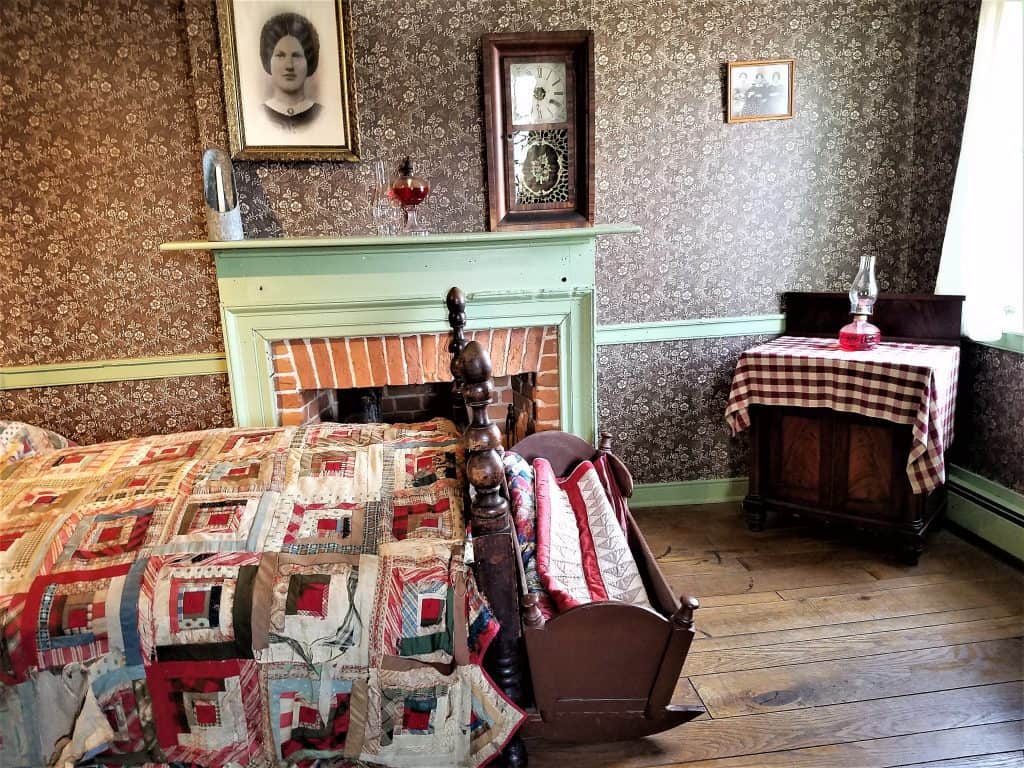 The bed where Jennie Wade’s sister was lying. Notice the bullet hole on the fireplace mantel.

Day Three of the Battle

On the morning of July 3, 1864, Jennie read her devotions aloud as was her regular routine. The message that day was from Psalms 27 and Psalms 30: “The Lord is my light and salvation, whom shall I fear? The Lord is the strength of my life, of whom shall I be afraid?”

Georgia became uncomfortable hearing the words and asked Jennie to stop reading. Jennie reportedly replied, “If there is anyone in this house that is to be killed today, I hope it is me, as George has that little baby.”

Jennie then began kneading dough for the day’s supply of bread. Despite the added precaution of standing behind the open parlor door to help protect her, a stray bullet passed through both the heavy outer door as well as the inner door. 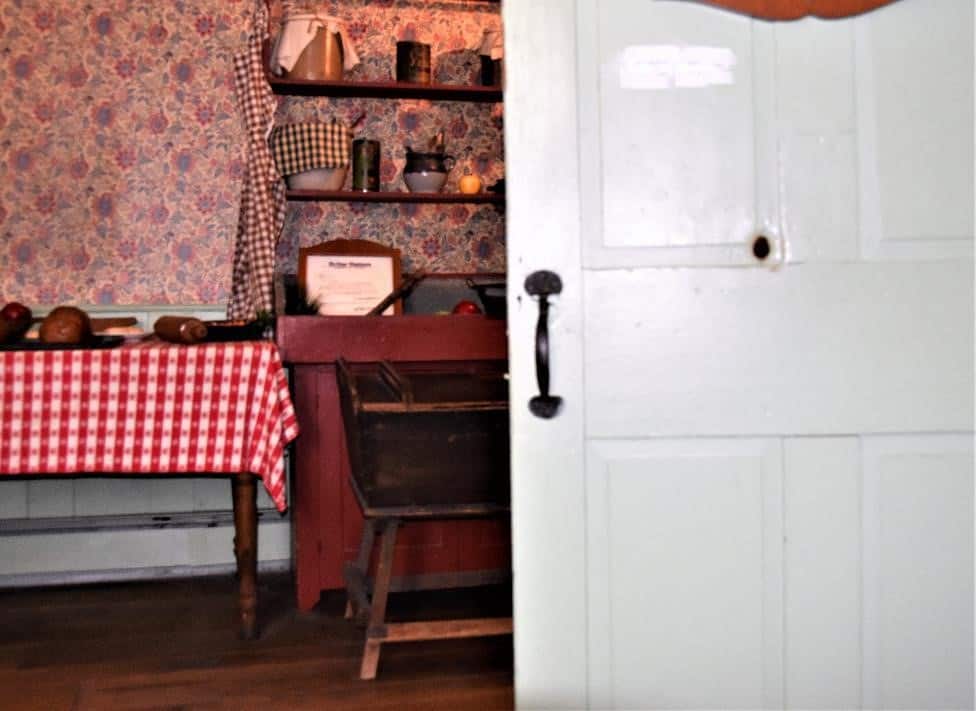 Notice the bullet hole in the door that Jennie Wade was standing behind. The original dough trough can also be seen.

The bullet struck Jennie in the back, passed through her heart and became stuck in her corset. With flour still on her hands, she fell to the floor, the white powder getting strewn across the room and mixing with the blood of her wound. Her mother saw her fall, and told Georgia, “Your sister is dead.” Georgia’s screams brought Union troops running.

Wanting to get the family to safety, but unable to exit the dangerous north side of the house in order to go down in the cellar, the soldiers wrapped Jennie’s body in a blanket and carried her up to the second floor. They then enlarged the hole the artillery shell from July 1 had made and conveyed her body into the adjoining house of the McClain’s, and then down their stairs. Back to the ground floor, they exited the south side of the house where the cellar doors are located, and everyone was moved to the safety of the small underground space.

In the small dirt-floored cellar, the family was forced to sit and stare at the body from approximately 9 a.m. July 3 until 1 p.m. July 4. 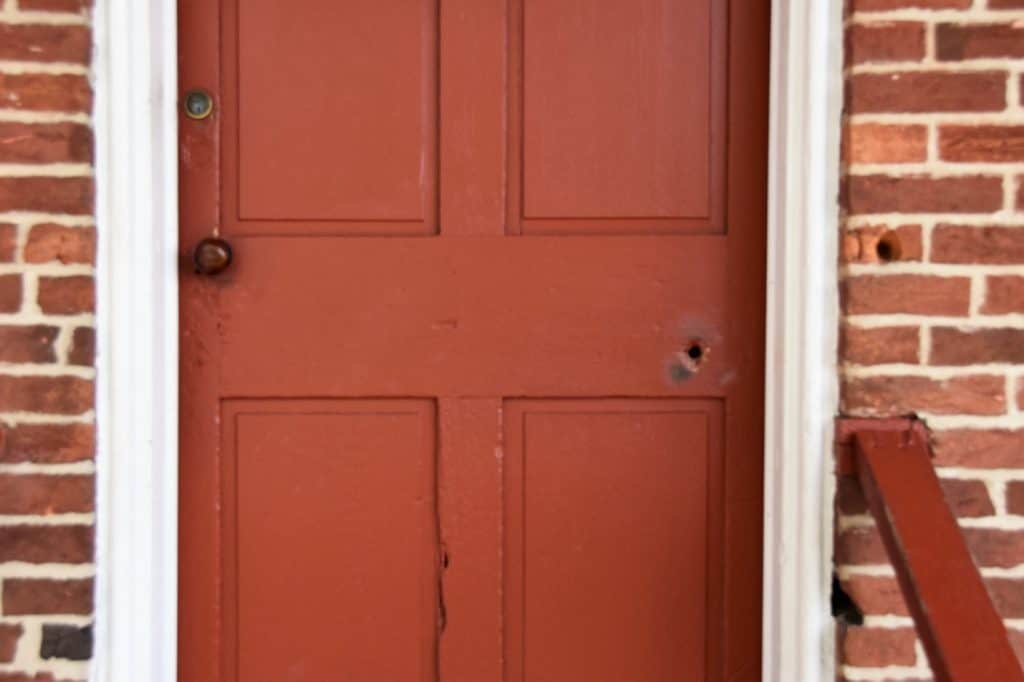 Outside door with bullet hole. Other holes can be seen on the exterior brick.

With the heat of July and the perils that surrounded them, the family finally buried Jennie in Georgia’s garden on July 4. Even then, the people of the town didn’t know if the battle was over or who had won.

One resident said they did not know Union forces had been victorious until July 5, though they “suspected it because of the lack of jubilation by the rebels.” Tillie Pierce, another resident said, “We were glad that the storm had passed and that victory was perched on our banners, but oh, the horror and desolation that remained.”

According to journals written by local residents, the ground was covered with dead horses, broken wagons, pieces of shells, battered muskets and swords. Many farmers fared worse than the townspeople because the artillery made roads over their grain fields, destroyed fences, and damaged barns. In 1886 a local historian wrote that so completely were the farm fences destroyed that you could ride out of Gettysburg in any direction and never run into a fence.

By far the most distressing aftermath of the battle were the thousands of dead, dying and wounded men left behind by the departing armies. Of the approximately 170,000 troops at Gettysburg, one of every four was a casualty—killed, wounded, or reported missing.

A medical officer described the scene as “an occasion of the greatest amount of suffering known to the Nation since its birth.” Gettysburg resident Fannie Buehler found the sights and sounds of the hospital established in the courthouse across the street from her home “too horrible to be described.”

In addition to caring for the wounded and burying the dead, the town had to deal with a wave of between 10 and 12,000 visitors who descended upon Gettysburg looking for loved ones—or merely wishing to see the famous battlefield where history had been made. 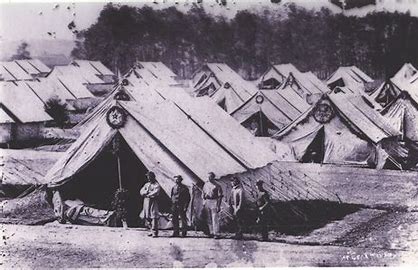 Camp Letterman was set up to deal with the wounded after the Battle of Gettysburg.

When at last things began to settle down—some six months later—Jennie’s body was moved to the cemetery of the German Reformed Church where the family attended services. Then, about a year later, she was reinterred once again to Evergreen Cemetery.

Money for a monument was raised in 1900 and still marks the site where Jennie is buried. Additionally, she is one of only two women in the United States to have a perpetual flag fly over her grave 24 hours a day. The other is Betsy Ross.

Jennie Wade grew up in Gettysburg and had two dear friends. One was Wesley Culp, whose uncle owned, what is now known as Culp’s Hill. As an apprentice to a harness maker that moved to Virginia before the war, Wesley ended up living in the Old Dominion and fighting in Stonewall’s Brigade for the Confederacy during the war.

The other friend was Jack Skelly, who fought on the Union side. Some say he was engaged to Jennie at the time of her death.

When Jack Skelly was wounded in the Battle of Carter’s Woods near Winchester and captured, he asked to see his friend Wesley Culp whose regiment was nearby. Skelly requested that Wesley deliver a note to Jennie Wade the next time he made it back to Gettysburg.

Wesley found himself back in the town he knew so well quite soon, but it was a town in which he was considered a traitor—even by his own relatives. Several family members had threatened to shoot him on sight. He did, however, visit his sisters on the night of July 1, and told them about the letter.

Wesley then ended up fighting on the very ground where he had spent so much time exploring, hunting, and hiking as a youth.

It is the same ground he died on. 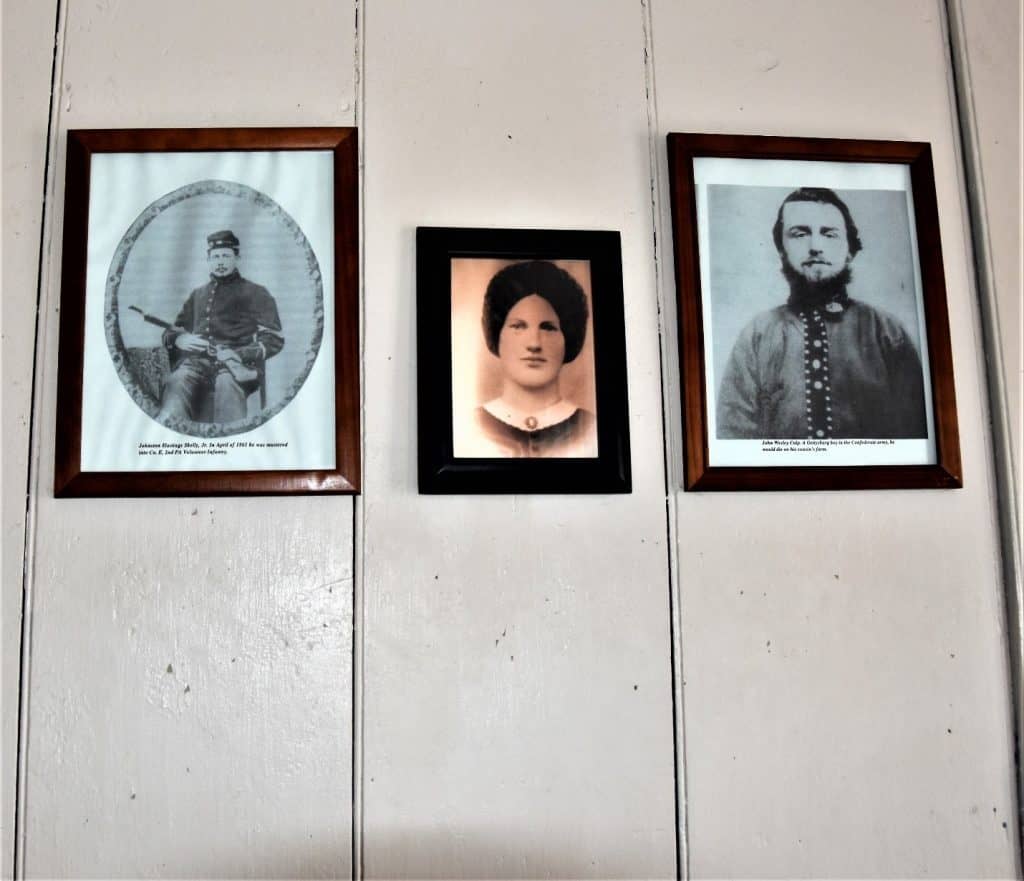 Portraits of the three friends hang on the wall at the Jennie Wade Museum.

The letter was never delivered, so Jennie never knew that Jack Skelly was wounded. Neither was the letter ever found. Wesley Culp was reportedly killed on July 3 on Culp’s Hill, but since his body was never recovered, it is unknown exactly when or where.

Jack Skelly succumbed to his injuries on July 12, nine days after his friends died, but he likewise did not know of their demise. He is buried near Jennie at Evergreen Cemetery.

His tombstone says: “My country needs me, mother. May I go? 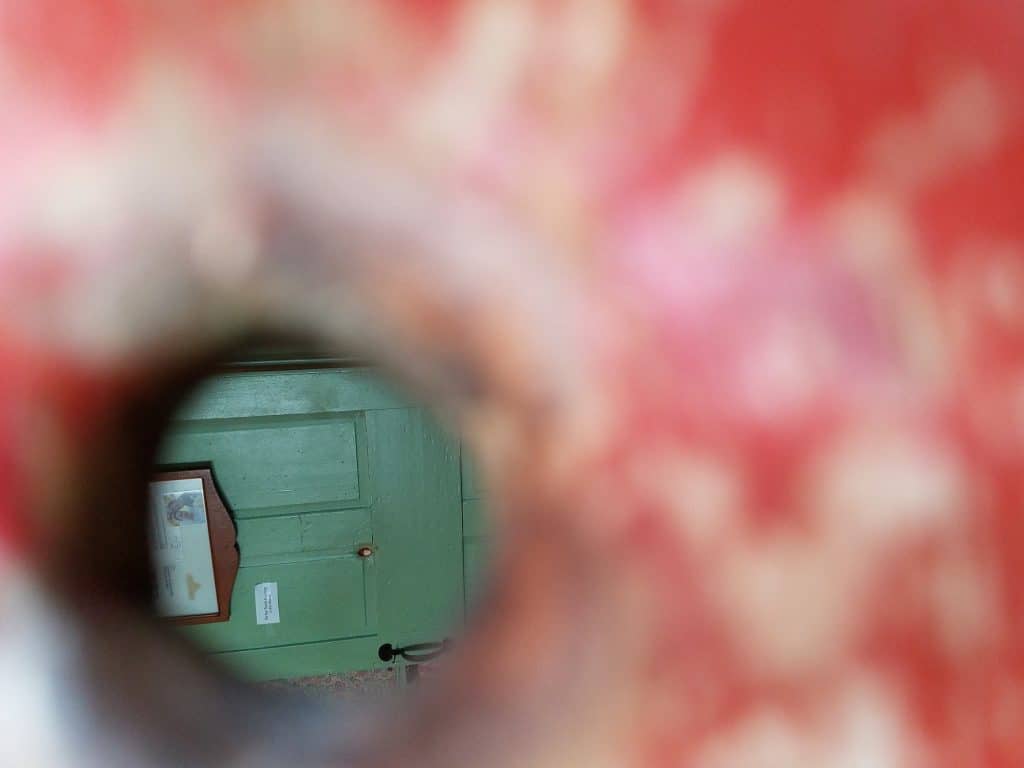 Photo of second bullet hole in the Jennie Wade house, taken through the hole of the outside door.