The Delta Queen Hotel in Chattanooga 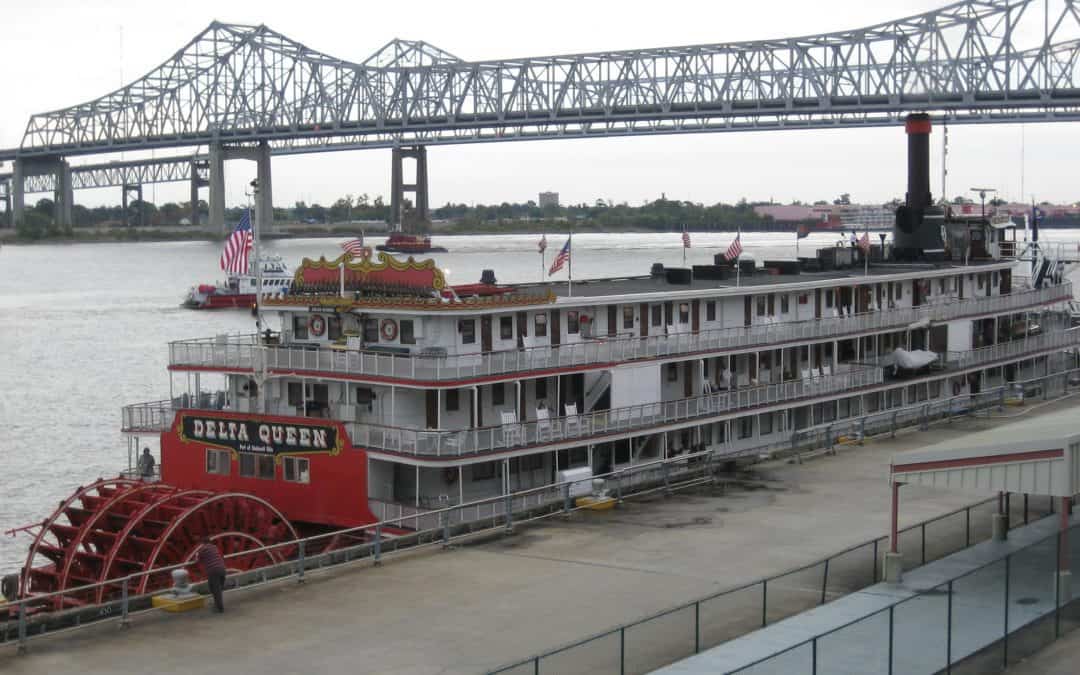 Staying aboard the Delta Queen hotel in Chattanooga, Tennessee,  was a unique lifetime experience that I can now check off my travel bucket list. You see, the Delta Queen is not your typical hotel. The Delta Queen Paddlewheel Steamboat was actually the last fully operational, overnight passenger steamboat in the country.

On this memorable trip in 2013 (which I called my “Magical History Tour”), I logged 2,581 miles, visiting nine states in seven days, and got to stay aboard this historic and legendary paddlewheel boat.

Considering the turn of events, I feel really lucky to have had the opportunity to sleep on this riverboat while she was moored and used as a stationary hotel in Chattanooga. She was bought by the Delta Queen Steamboat Company and moved to Houma, Louisiana, in 2015 for a restoration project. When Hurricane Ida hit in August, 2021, the Delta Queen was damaged.

All Aboard The Delta Queen Hotel

Stepping board the Delta Queen hotel is like taking a nostalgic trip back in time. Built in the 1920s, the boat is lavishly decorated and retains its historic atmosphere. As someone said, it’s like staying at a Victorian bed-and-breakfast on water. 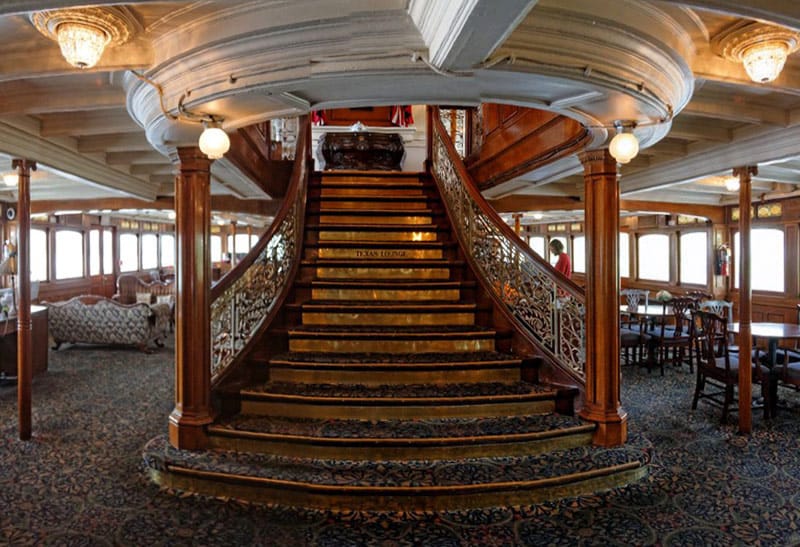 The elegant staircase in the Delta Queen hotel.

In her storied historic career, the Delta Queen logged more than  two million miles and carried over half a million passengers. 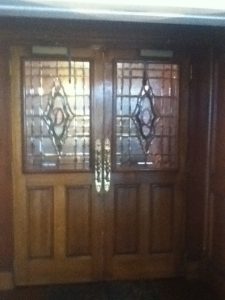 When you see the Tiffany-style stained glass windows, rich hardwood paneling, gleaming brass, and the beautiful Grand Staircase crowned by an elegant crystal chandelier, you can understand how the costs added up. The lounges and public areas are roomy and comfortable; and the entire boat features mahogany and cherry wood trim.

As a result of her stylish and luxurious trimmings, the Delta Queen entertained U.S. presidents, foreign dignitaries and a multitude of celebrities.

But lots of not-so-famous people had the opportunity to experience the hospitality of the Delta Queen over the years as well. For instance, on June 26, 1938, the Delta Queen raced the Port of Stockton for a distance of 17 miles. She carried 900 passengers who paid 50 cents each, and, unfortunately lost the race by a whisker.

As if that history wasn’t enough, the Delta Queen served the U.S. Navy as a floating barracks, training facility and troop ferry from 1940-1946. She is even credited with ferrying (as many as 3,200 men at once) wounded Pearl Harbor victims ashore from large ships.

For that feat, she was awarded two medals: An American Campaign Medal and World War II Victory Medal.

In 1989, the Delta Queen was designated a National Historic Landmark, and in January of 2004, she was inducted into the National Maritime Hall of Fame.

Some of the links in this post may contain affiliate codes at no cost to you.

A Peek Inside The Cabin Aboard The Delta Queen 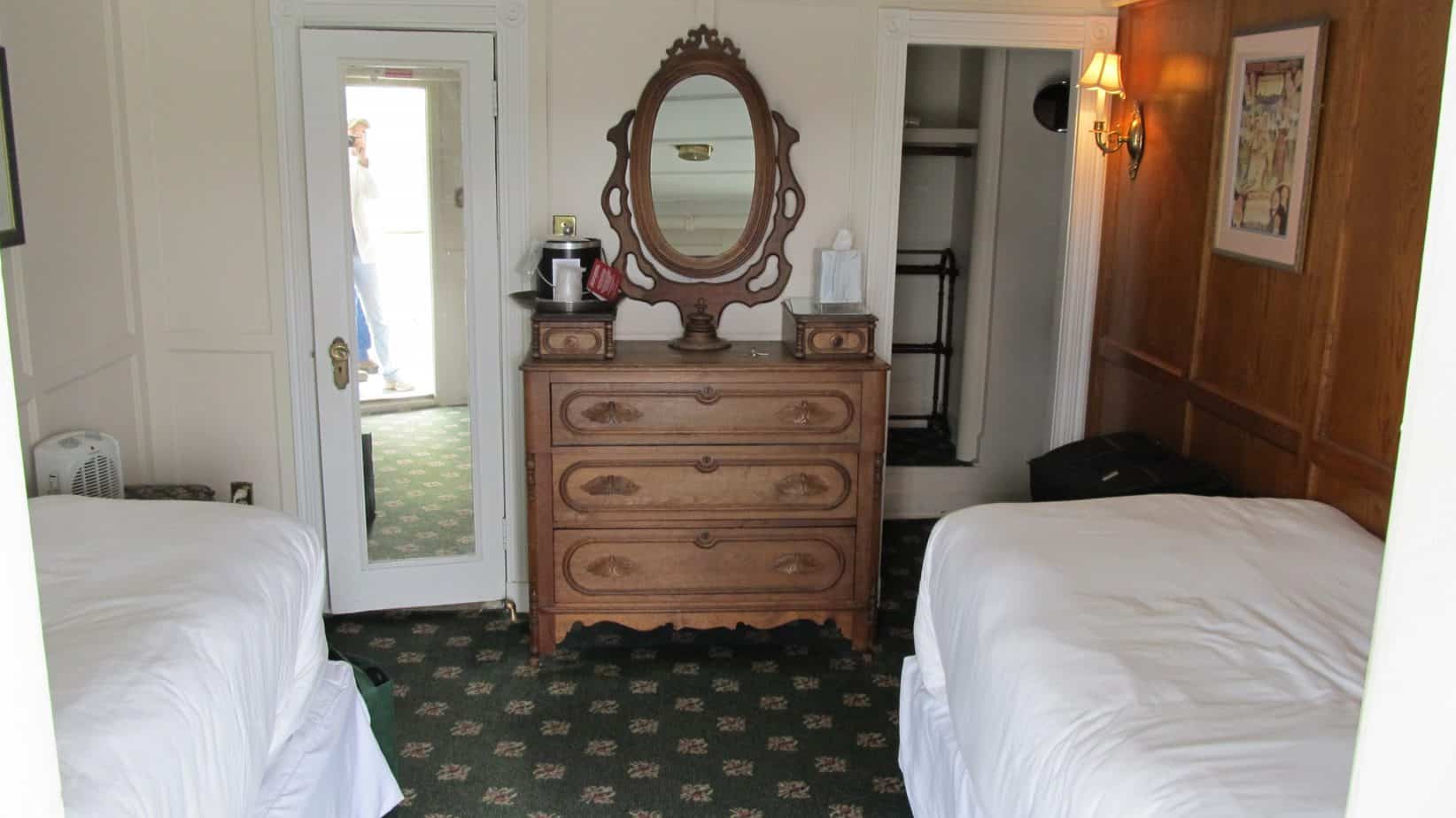 Close quarters in my cabin at the Delta Queen hotel.

I have to admit, by today’s standards the regular quarters in the Delta Queen hotel were small and the doorways were short. I’m 5’ 9” so I had a little trouble in the low doorway department. The door of the bathroom gave me the most trouble. It was very narrow and even shorter than the cabin door… something I had to get used to. 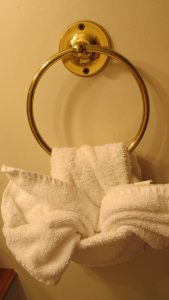 Still, I enjoyed seeing the brass fixtures and the lights that remain just as they were in the 1920s.

It’s hard to imagine what it would cost in today’s world to start from scratch and replicate the accents of quality that abound. The brass, the Tiffany glass, the polished wood, all contribute to the charm and extravagance of the by-gone era and make it easy to imagine that you have stepped back in time.

I often stay at historic Bed and Breakfasts or restored hotels, but being on the water and being surrounded by so many special touches adds another level of allure. It’s impossible not to feel and sense the presence of history at every turn — a truly unique experience!

And what could be more romantic or wonderful for a historical fiction author than to experience the traditional southern charm of a Mississippi riverboat?

Getting the opportunity to spend a night at the Delta Queen hotel was something I will never forget.

Passing The Time Aboard A Floating Hotel

The afternoon we arrived was pleasant so we sat on the deck in rocking chairs and watched the boat traffic on the river. Although not as busy as the Mississippi, which I had the opportunity to see later in my trip, there were a few tourist boats on the Tennessee River. 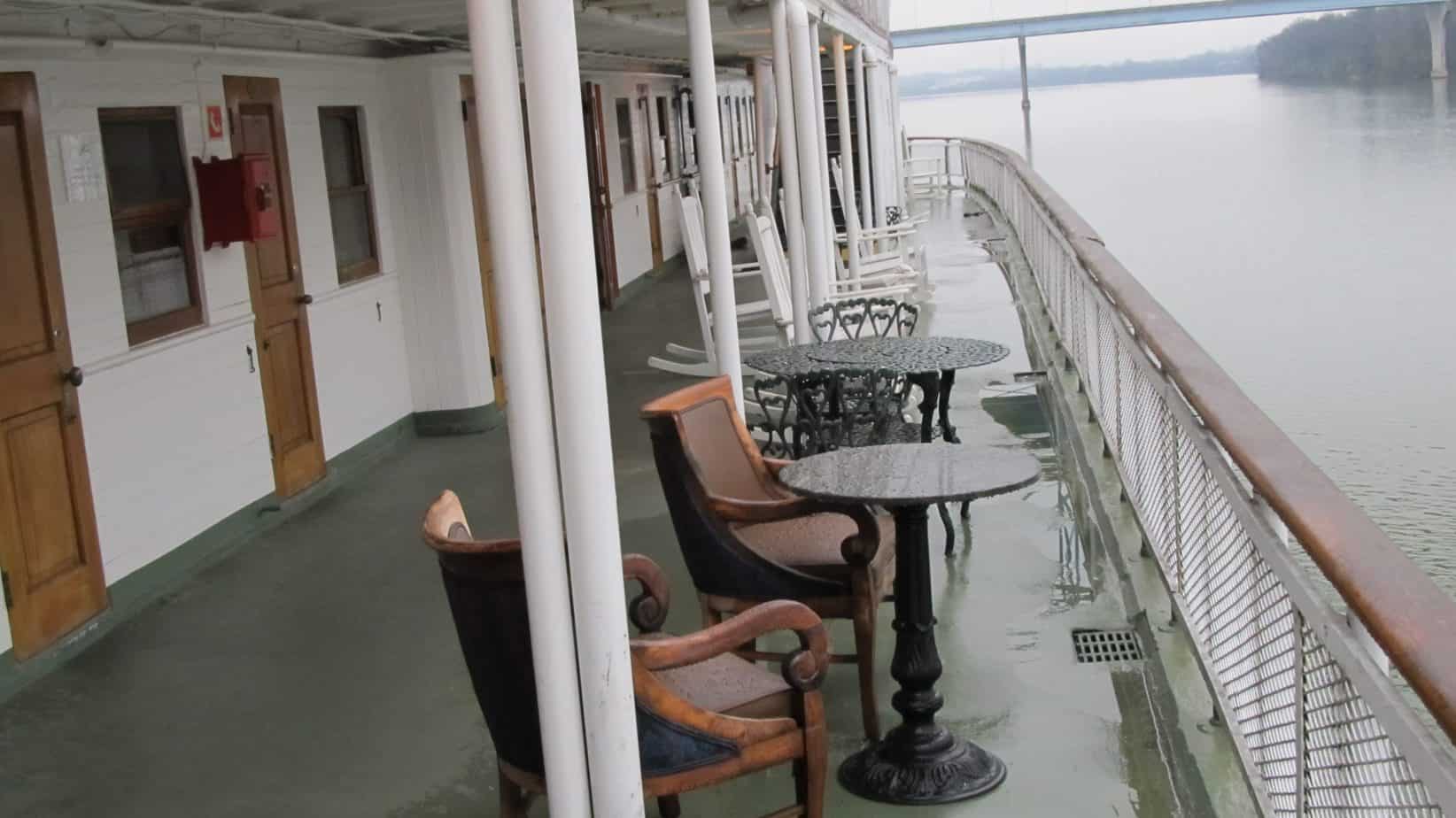 Tables and chairs lined up on the deck of the Delta Queen hotel when it was moored in Chattanooga.

In the evening I went a few doors down to check out the bar, then relaxed in the downstairs lobby in a deep, comfortable leather chair.

Right beside where the Delta Queen was moored, I discovered a park, complete with an old-time (indoor) carousel. The Tennessee Aquarium is also close by, accessed by the world’s longest walking bridge across the Tennessee River. This also takes visitors to the city’s Arts District and museums in Chattanooga. There are shops located in an old mill near to the Delta Queen as well so it’s a great location to use as home base during a visit to Chattanooga.

After dark, we were treated to a fireworks show over the water that was spectacular! I didn’t do very well in the picture-taking, but trust me, it was loud and colorful! 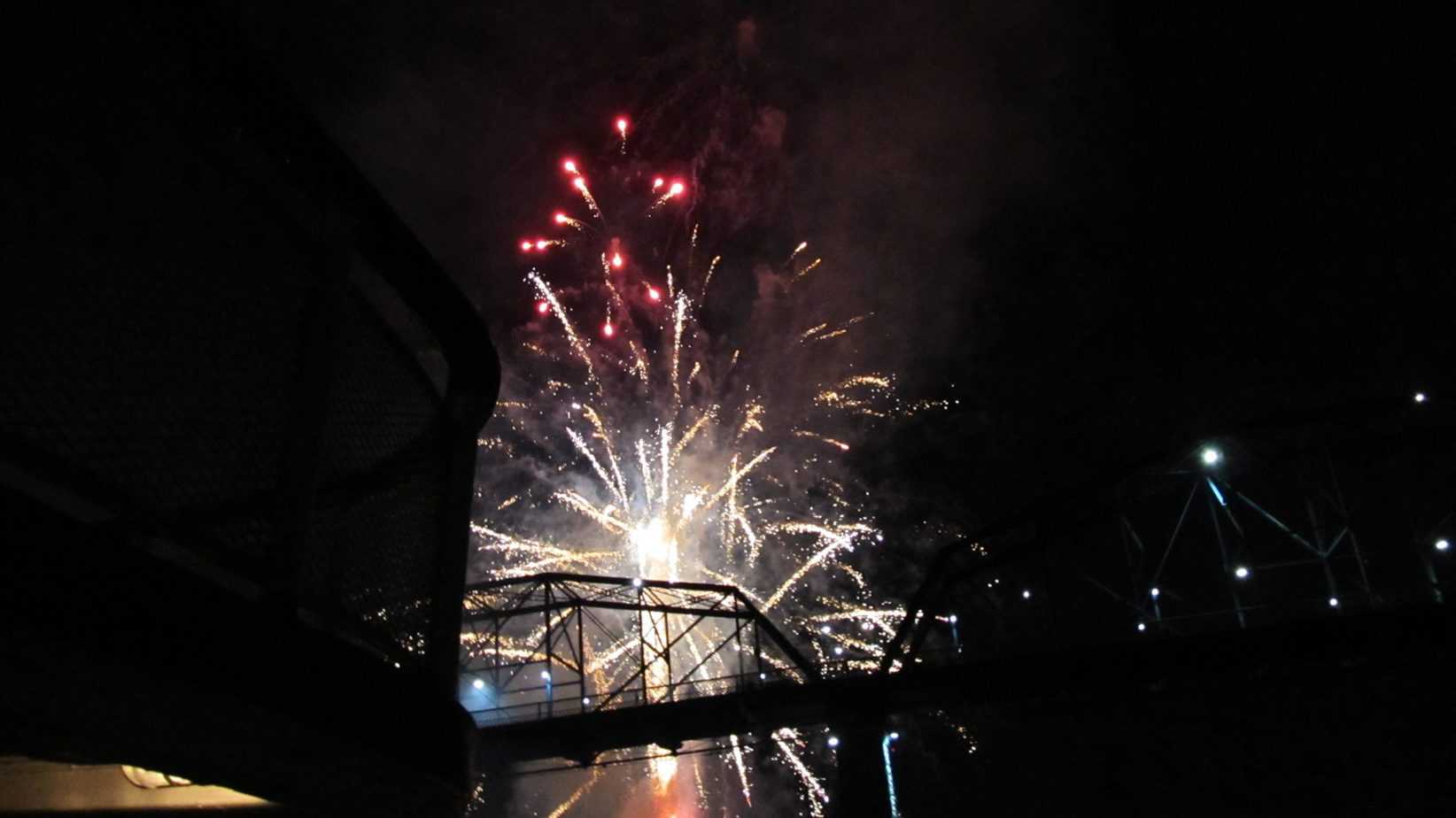 Is The Delta Queen Steamboat Haunted?

For all of the ghost hunters out there, I did get up in the middle of the night and walk around the deck, but I didn’t see anything — not even the spirit of the captain that supposedly haunts the boat. 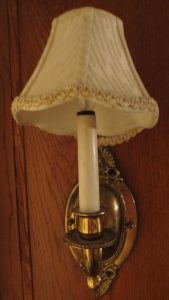 Victorian brass lamp that hangs in the cabin of the Delta Queen.

The only problem I found while staying board the Delta Queen Steamboat Hotel was falling in love with the past and not wanting to return to the hectic pace of the present.

Facts About the Delta Queen

Another unusual feature of Delta Queen is her steam calliope, mounted on the Texas deck aft of the pilothouse. It covers approximately three octaves, and used to play while she was docking and undocking.

Here is a video of the Delta Queen’s final voyage in 2015 featuring the calliope.

Is The Delta Queen Hotel Still In Service?

While moored in Houma, Louisiana for restoration, the Delta Queen was impacted by a direct hit from Hurricane Ida on August 21, 2021.

Amazingly, despite being subjected to winds in excess of 150 mph for more than an hour, the Delta Queen did not suffer any major structural damage.

The storm did manage to rip away some of the waterproofing membrane on the roof, as well as several sections of handrail along the stern (rear) of the vessel. Several doors were damaged and about a dozen windows were broken.

It’s a true testament to the craftsmanship of the Delta Queen riverboat’s builders that she held up so well, especially when compared to adjacent structures in the area.

The Delta Queen Steamboat Company plans to renovate the riverboat and once again offer cruises. You can sign up for alerts and updates HERE.

All Aboard The Delta King

If you feel like you’ve missed out on a great opportunity to spend the night in an authentic riverboat, don’t despair. The Delta Queen Steamboat has a twin brother, the Delta King!

Moored in Sacramento, California, the Delta King is a riverboat hotel that offers 44 beautiful high-class rooms with breakfast.

Historic Timeline Of The Delta Queen

☑️ The Delta Queen and Delta King were created in Scotland from 1924 to 1927), and was then shipped in pieces to Stockton, California, where it was reassembled.

☑️ June 26, 1938 – Delta Queen and Port of Stockton raced 17 miles from Sacramento down river to Clarksburg. Delta Queen carried 900 passengers who paid 50 cents each. Port of Sacramento won by a whisker.

☑️ April 1963 – Delta Queen and Belle of Louisville race and it is a publicity success.

☑️ 1966 – Congress passed law banning wooden superstructures with more than 50 guests but the Delta Queen was granted two-year exemption, which was later extended to 1970.

☑️ June 1970 – Delta Queen was added to the National Register of Historic Places.

☑️ December 1970 – A new exemption added as an amendment to another bill and signed into law!

☑️ September 1971 – Delta Queen is contracted to carry U.S. mail with its own postmark.

☑️ January 2004 – The Delta Queen is inducted into National Maritime Hall of Fame.

New Bed and Breakfast in Gettysburg